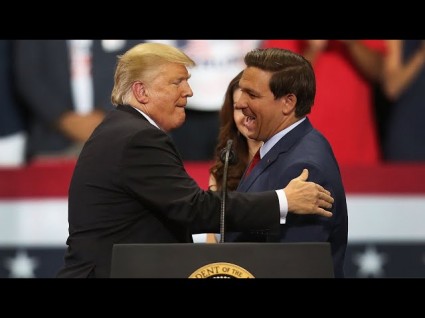 Fox News contributor Lara Trump warned Florida Gov. Ron DeSantis on Sky News Australia against running for President in 2024. Trump has targeted the Florida Republican, too, much to the chagrin of his party.

"I think that Ron DeSantis is very smart. Look, he's a young guy," she said. "There will be a lot of opportunity for him in the future, and he knows this, to run for President. I think he's probably waiting to see what my father-in-law does," she told host Erin Molan on Sunday.

Lara, who is married to Eric Trump -- and that tells you everything you need to know about her -- said that DeSantis should wait until 2028 for a presidential run.

"I think he's a smart enough guy to know that it will be great to have all the support of this party, of the America First MAGA movement — whatever you want to call it — fully behind him in 2028 than possibly fracturing it in 2024," she said.

"I can tell you, those primaries get very messy and very raw," she added. "So wouldn't it be nicer for him, and I think he knows this, to wait until 2028?"

The disgraced former President is expected to make an official primetime announcement at his Florida resort, Mar-a-Lago, on Tuesday, despite concerns from his party's leaders that the move could backfire. I feel it's not beyond Donald to form a "MAGA party" or a "patriot party" to fracture the vote since DeSantis has pulled ahead of the ex-president in the latest poll. He's just that spiteful.

Time To Investigate Tech Firms That Use 'AI' To Raise Rents