Hunting stallions might raise the odd eyebrow but those who ride them insist they are entirely well mannered, says Saskia Campbell

Think of a decent hunter and your mind most likely goes to a three-quarter-bred Irish type with enough bone to stand up to work and that’s sporty enough to get you out of trouble. The majority will picture a gelding, some will picture a mare – but almost never would one picture a stallion. So why do more not consider hunting stallions?

If you start them correctly, however, stallions have proven to be invaluable assets to hunt service over the years. Embla Stud, run by Yvonne Hill, has been home to several hunting stallions, including full Irish draught Embla George. After being introduced to hunting and being allowed to mature, he joined the Albrighton kennels in 1988, hunting their hounds for 12 seasons.

His stablemate, Embla Statesman, also an Irish draught, was introduced to hunting as a four-year-old by Hill and hunted hounds on a few occasions, and George’s son, Embla Alfred, was kept by Hill and hunted a lot in the field. All proved exceedingly mannerly and trustworthy – with Hill being able to do them all herself on a hunting morning.

“You can get these well-bred stallions who have never jumped a jump, seen a show or been on a lorry,” says Emma Spencer, owner of hunting stallion Tully’s Court. “It’s far better to see a stallion in work with a job to do, and get a gauge of its temperament, rather than just looking at its passport and how it’s bred.”

Tully’s Court was brought over from Ireland by Spencer and her husband Antony as a four-year-old. He was backed and introduced to hunting with the Warwickshire and, like most Irish draught horses, took to it like a duck to water. He was hunted predominantly in the field and was always warmly received by everyone who hunted alongside him, with most simply enjoying seeing a stallion have a job outside of breeding.

It’s often suggested stallions can’t cope with crossing the boldest hunting country as they’re too protective of their crown jewels, a myth Bruce Langley McKim and his team from Thorpeley Stud – the home of the hunting stallion – are keen to dispel. 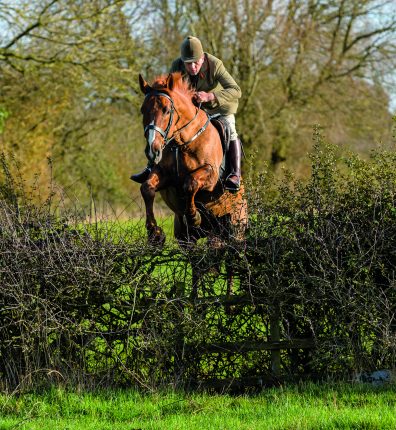 One of the best ladies’ hunters Langley McKim ever produced, the stallion Romeo IV, hunted with the Quorn and the Fernie, frequently tackling their biggest country. Langley McKim often runs his stallions in hunt races and open team chases, and has never once felt them ‘go cold’ on him. The only stallion in his string who is slightly more limited to trappy rails rather than big, open hedges is Craikhow Hall Jensen, the Suffolk Punch, purely because of his stature rather than his precious cargo.

Langley McKim’s current string of hunters includes sport horse stallion Cos Me Is Black, thoroughbred stallion Hydrogen, Irish draught stallion Carrigfada Diamond and Cleveland Bay stallion Pembridge Justice. They have all hunted in the field with the Fernie, Quorn, Cottesmore and Cambridge University Drag Hounds. Some have hunted hounds, some have field mastered and some have even been loaned to secretaries to collect the cap on.

He takes his role as the stallion’s stereotype- breaker seriously – always on hand to correct people’s perceptions and show that if you give them a job and treat them like a normal horse, you’d be hard-pushed to find a better ride.

He remembers an instance out with the Quorn when he was on Cos Me Is Black watching hounds work and became aware of a rather smart lady warning everyone within earshot to keep away from Langley McKim and his mount. The scaremongering was full of the typical assumptions – that he was dangerous and would jump on them, all because he was entire. Eventually Langley McKim heard enough and quipped: “With all due respect, madam, I am an entire male and I’m not going to attack you.”

As good as they are, like many other riders of stallions, Langley McKim doesn’t take unnecessary risks. He never buries his horses in the Meet, and remains spatially aware – something he believes is key for a trouble-free day. “Patrick Swayze says to Jennifer Grey, ‘This is my dance space. This is your dance space. I don’t go into yours, you don’t go into mine’, which hits the nail on the head for hunting stallions. You have to ride them accordingly with other horses and be aware of things like people approaching you at the meet, glass in hand, steering their horse straight at my horse’s face. While I don’t think they would necessarily do anything, it’s still something I avoid.”

If you have had a day with the Quorn, it’s very likely you will have spotted Tim Dobson-Seaton whipping-in on one of his appaloosas. Dobson-Seaton runs the Centaur Stud – one of the oldest-standing breeding institutions for the appaloosa sport horse in the UK – and has hunted his top stallion, Centaur The Toff, on and off since he was a four-year-old, both in the field and in hunt service.

The Dobson family had been hunting stallions for years. Dobson-Seaton’s grandfather, Jim Dobson, started the family’s love of hunting spotty stallions in the 1960s after purchasing Centaur’s foundation stallion from Appleby Horse Fair as a two-year-old. He stumbled across the colt by chance and was struck by his excellent conformation and is famously quoted to have exclaimed: “What a wonderful colt, but what an awful colour.”

The Rock soon made his way from Appleby to Melton Mowbray and when he was old enough, Jim introduced him to hunting with the Quorn. At the time, appaloosas were strictly for the circus – and to have one out with one of the smartest packs in the UK was met with raised eyebrows. People’s concern over ‘Rocky’ was quickly proven to be misplaced. He demonstrated he was adept at crossing any country and Jim made a point of never turning him away from a fence. While his spotty horse may not have been everyone’s cup of tea, he blossomed into a respected hunter and proved that even ‘funny-coloured’ stallions could keep up with the best of them.

Hunting stalwart and former Horse & Hound editor Michael Clayton recalls hunting a stallion, Canaveral Gold, loaned to him by Quorn hunting farmer and stud owner Geoff Brooks. The pair were always viewed as a bit of an anomaly – Clayton wasn’t sure whether that was down to the fact his mount was entire, or the fact he was a 17hh palomino.

‘Tex’ was a gentleman to ride, but did have a habit of rearing half up in order to get a better view of what was going on – something Clayton initially found alarming, but soon realised was a sign of the horse’s intelligence rather than malice. He made light work of Quorn country – as long as his rider didn’t interfere. “You had to leave the jumping to him. He put himself right and would clear very big hedges or timber, preferring to do it on a rather loose rein. I had to force myself to leave his mouth alone at first, but I soon got to trust him.”

Clayton doesn’t remember hunting alongside any other stallions during his travels, an extraordinary observation given the sheer amount of visiting and days he accumulated. When questioned on this, he could only attribute it to the UK’s keenness and haste when it comes to castrating – an attitude that doesn’t seem to be mirrored so much on the Continent. His advice for hunting one is simple, quoting the age-old saying; you tell a gelding, ask a mare and discuss with a stallion.

Sue Deakin hunted stallion Skippy Too with the Duke of Beaufort’s on a number of occasions. He was not bought with the intention to hunt, but as a believer that hunting is the best foundation to a young horse’s education, she soon packed him off on the lorry for some autumn days.

While Skippy was an extremely well-mannered hunter, Deakin ensured she always stayed two steps ahead when it came to assessing her surroundings – more so to protect the horse (who was at the time extremely valuable) than because he ever misbehaved. “On a Saturday, you could get people from London on hirelings who had never hunted before. They didn’t know what green or red ribbons in tails meant, let alone were able to recognise a stallion ribbon, so for his sake I never put him in the thick of the field.”

Similar to Deakin, event rider Charlotte Rowe believes hunting is the best education you can offer a horse. She hunts stallions for Charles Upham and John Ford, and has a rule that any stallion that comes on to her yard must be hunted for education purposes, no exceptions – regardless of their breed, height or value.

“You see a lot of stallions at shows and people just can’t deal with them because they have never been allowed to see any sort of life outside their stable. If you treat them like normal horses from the get-go, you don’t make issues for yourself later on.” 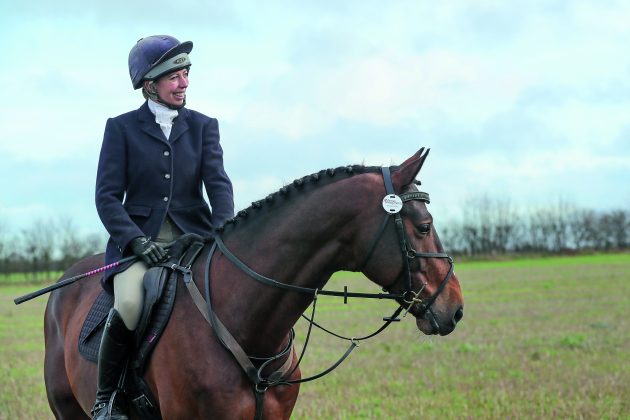 Fellow event rider Ginny Howe started hunting her stallion, Interlaken W, two seasons ago. The showjumping-bred horse started his eventing career at four years old and quickly climbed the grades. Naturally careful, Howe felt that introducing him to hunting would teach him to travel to his fences better and iron out his tendency to be slightly mud-shy.

Over the past two seasons, he has enjoyed days over the Bicester’s biggest country, as well as with the Heythrop and Farmers Bloodhounds. She acknowledges that although she is lucky to have a horse with such an excellent temperament, she firmly believes Lanikin’s amenability and excellent tolerance of other horses comes from being treated completely normally at home. “I can travel him in a lorry with mares, stable him next to mares, ride and lead out hunting, go off on my own, shut gates and catch loose horses, and he just gets on with it.”

The Heythrop is no stranger to stallions. Howe’s mother, Liz, remembers legendary Field Master Richard Sumner and his stallion Ballyskip leading the field over ‘unjumpable’ obstacles on more than one occasion. After retiring from showjumping, Ballyskip and Sumner field mastered twice a week, with the stallion often arriving on the lorry alongside Sumner’s liveries.

“He could distinguish between his covering bridle and exercise bridle”

Liz Howe says that despite being an active stallion, he was able to distinguish between his covering bridle and exercise bridle, and when the latter was on, he knew he had a job to do. “One time, hounds found on a headland, and the most direct route was under a pylon,” she says. “There was a small, trappy fence between the supporting stanchion wires that came diagonally off the telegraph pole and the telegraph pole itself – so you were effectively having to jump in the apex between a pylon and a wire. None of us were brave enough to do it, but Ballyskip and Richard made light work of it and off they went.”

If you have the right knowledge and experience, a stallion will make a fantastic hunter. They thrive both in hunt service and the field, and are able to differentiate between when they have a job to do out hunting and when they’re covering. As Langley McKim puts it, they aren’t “just bloodlines on the end of a rope”. While there needs to be a degree of respect and awareness around them, when one has a good one, nothing can beat the unique relationship that forms when crossing country – even if they do raise the odd eyebrow.

To find out more about what makes a good hunter, read here

Iran Stunned the U.S. at the 1998 World Cup. That Game Offers Lessons For a Monumental Rematch in Qatar