In this world exclusive, The Field discovers the blend of gunmaking art and cutting-edge technology that has combined to create the new Gallyon shotgun

We present to you a world exclusive review on the new Gallyon shotgun released this year. For more gun reviews from The Field please visit our gun reviews section or discover what the world’s most expensive guns cost.

Our world exclusive review of the new Gallyon shotgun

It used to be said that there is nothing new in gunmaking. That may no longer be true as a fresh team behind the East Anglian gunmaker Gallyon has constructed a thoroughly modern English gun, not in competition with the venerable London Bests, but at a sweet spot in the modern gunmaking world that looks set to be revolutionary. What is required for the modern Shot is a gun that can, above all, be reliable; that has exceptional fit and finish; and that balances, handles and shoots to the customer’s specific requirements.

Gallyon believes its recently released over-and-unders can answer ‘yes’ to all of those requirements, and The Field was given exclusive access to investigate this new all-British-made gun with limited recoil and patent-pending barrel technology, that sounds like the door of an expensive car when it closes (due to the engineering), and boasts a formidable combination of gunmaking experience and world-leading technological skill. 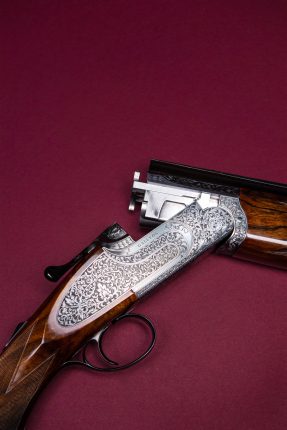 The triumvirate behind the Gallyons have approached the task of building a gun with laser-like thinking. They met on a shoot organised by Richard Gallyon, the last of the Gallyon family to run the business. The mantle of one of the oldest names in gunmaking has been passed to Adam Anthony, Richard Hefford- Hobbs and Don Custerson. Custerson, the designer of the new Gallyon shotgun, has built guns for some of the wealthiest people in the world, people for whom compromise is an unfamiliar term. He has an overview of gunmaking that brings half a century of experience to all aspects of the Gallyon and has worked for some of the best-known names in the trade.

One thing Custerson had not been granted before was free rein in the design process to bring all of his experience to a project. Not only did Anthony and Hefford-Hobbs give him that, but Hefford-Hobbs’s position as chairman of engineering firm Cambridge Precision meant that the expertise to bring his ideas and technical drawings to reality was now at hand. Cambridge Precision is the only company outside Japan to make components for Sony, which demonstrates the calibre of technological expertise this new shotgun can boast. For Custerson, even though he was looking to retire, the opportunity was irresistible. He had one condition – there was to be no compromise.

The new Gallyon shotgun is not hamstrung by historical legacy. This resistance to change in other parts of the trade is perhaps why modern coatings and techniques, developed in other industries, have hitherto not been taken advantage of in gunmaking. Not only have such processes been employed in the building of the new Gallyon, but Custerson brought to the design a knowledge of failures inherent in other ‘classic’ designs. The Gallyon opens to a perfect width of gape, with none of the bounce-back familiar to users of some over-and-unders. The kickers retract as the gun closes smoothly and easily, preventing cartridges scoring the action face. That kind of unnecessary wear has been designed out and the attention to detail, incremental improvements in many areas, adds up to a large improvement overall.

Your peers in gunmaking are your harshest critics. Gallyon is one of the few gunmakers to produce its own barrels. It does so to have control over the whole process, and the provenance of the steel in every component part is known. They are hand-finished to give a flawless surface that matches the concentricity, roundness and straightness. The quality of the barrels is so impressive it prompted one master of the craft to say “these are the best barrel tubes I have seen in my 48 years as a master barrel maker”. Coming from Bill Blacker, that is a compliment to be proud of. 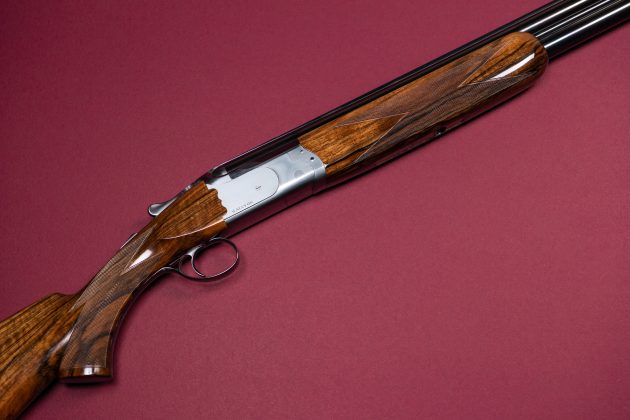 It is, however, the way the barrels are joined together that sums up the ethos of this gun and those behind it. Guns rust from the inside out and ribs loosen – it is one of the known failures of traditional methods of barrel construction. This problem, too, has been reduced to naught through the design of the mid-rib, for which a patent is pending. It would be almost impossible to make without the expertise of Cambridge Precision.

It is machined precisely by robots in five axes and, as with the component parts it makes for the nuclear industry, imperfection cannot be tolerated. The barrel profile is a little like the Eiffel Tower and the skeletonised rib must match that profile exactly so that the bonded surface area can be at its maximum. The 300% increase in bonded surface area over traditional barrels gives inherent strength. What this means for you, the Gun, is a great reduction in felt recoil and muzzle flip.

The Field has been able to world exclusively test the Gallyon prototype Cambridge model, too, on simulated game and at Compak Sporting – the latter an addiction of mine and a good barometer of how this gun and I were going to get along. I shoot clays and game completely differently, preferring a heavier, more deliberate gun to move on clays than when shooting game. During the first 25 Compak clays the gun felt perfect for live quarry, but was a little too flighty for the more exacting test of competition. That was until I changed out the titanium choke tubes for steel ones. If you handle and shoot enough guns, you can feel the difference such a move makes. With the extra weight from the steel tubes, the gun felt far more biddable and allowed the smooth movement needed for predictable shots found on the clay ground.

These chokes are produced in-house, are of the finest quality and a good overall length. They have a specially designed thread that reduces the possibility of them loosening and the attendant danger of them being shot when not seated properly in the gun, which can have catastrophic results. It will also matter in a world of steel shot, as a long, tapering choke tube is less of a harsh step when guiding ballistic pellets into the best possible patterns. The Gallyons are high-performance steel shot proofed, designed to meet the needs of the future. Shooting 125 Compak Sporting targets in quick succession is often subject to the law of diminishing returns due to fatigue. Unusually, with the reduced muzzle flip and recoil absorption, my scores increased each round. That is a benefit of the barrel design and handling of this gun, even though it was not fitted to me. 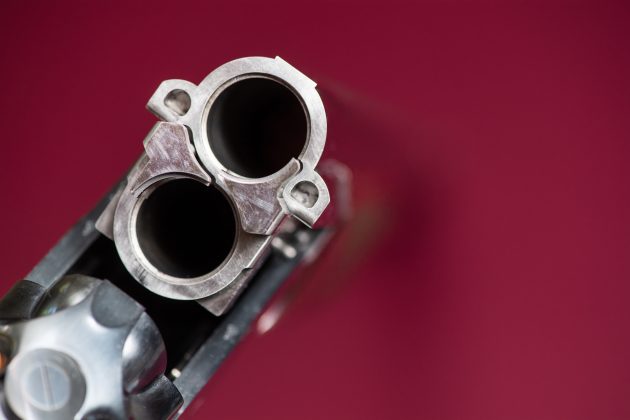 We will perhaps never be able to recreate the deep lustre of blacking found on mint-condition muzzle-loaders from the mid-Victorian era – the recipes are known but the chemicals used are no longer available. Gallyon has come as close as I have seen through the adoption of another cutting- edge technique. The action and critical lock parts are treated with electron-beam physical vapour deposition (EB-PVD) one-third the hardness of diamond, which aids corrosion resistance and, in the lock parts, reduces friction. The sculptural trigger- guard, which complements the sleek lines of the low-profile trigger-plate action, has the same process but in black or blue. This process leaves a rich, lustrous black layer that is only two microns thick but is almost impossible to scratch.

The trigger-pulls are also exceptional. Custerson explains: “With a clean sheet, you can approach it in the right way. Careful design, careful manufacture and knowing the angles, if you do everything right and the movement of the triggers and tumblers is short and powerful, you get excellent lock times and trigger-pulls. [By designing] mating surfaces that move properly across each other, with the prototype the trigger-pulls were 3½lb both sides with no adjustment.” The trigger-pulls are customisable from 3½lb to 3¼lb. This is one example of the hand-finishing element.

The use of machines here is not to cut down hand-finishing time, but to foster ultimate reliability. It is not about making as many guns as possible in the shortest space of time. Rather it is a blend of art and industry as all Best guns are made up to a level, not down to a price. This Formula 1-style gunmaking (Hefford-Hobbs is an enthusiast and you can see a love of F1 engineering advancement in the Gallyon gun) is taking advantage of the latest manufacturing techniques and materials; gathering data continually to improve; using robots and machines that are automatically aware of their gradual approach to recalibration (they send an email to the team to request updated parts when they sense they are nearing the limits of tolerance). All of it is to ensure that the design always delivers.

There is a choice of models and both the scroll-backed action of the Cambridge model and the side-plated Holkham use the same trigger-plate action. This action gives the guns a lower centre of gravity than other mechanisms and better handling characteristics as a result. You can choose, when ordering, whether the gun fires top or bottom barrel first (my preference would be top first for speed of reloading after one shot) and the changeover is by inertia block. The safety can be either manual or automatic. The 12- and 20-bore are available now and a 16-bore will follow later this year. The Cambridge is £18,950 without engraving; with engraving it is £23,950. The Holkham side-plated model is £28,950 and the Holkham deluxe is £39,950 (all prices are excluding VAT). 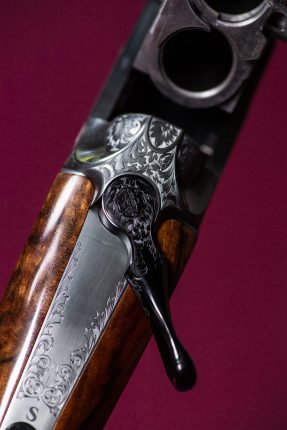 With guns in this bracket there is little point in talking about stock dimensions – a bespoke gunfit is included in the price and your Gallyon would be fitted to you. The standard fore-end is in the rounded English style, and both that and the stock are traditionally oil finished to the highest standard. The early Holkham side-plated version, launched at the famous shooting estate from which it borrows the name, has a capped semi-pistol grip (which is often confused with a Prince of Wales – the difference being the radius and the angle of the cap), EB-PVD coated and elegantly engraved following the style seen on the lockplates.

While bespoke engravings are available on request, the house style is inspired by the work of Christopher Dresser, a pivotal figure in the Aesthetic movement. There is one subtle exception. While these guns break new ground for Gallyon, it is perhaps fitting that the trigger-guard on the first Holkham model built has the cornucopia engraved on it. This is a motif many higher-grade Gallyon guns had and is a nod to the heritage of this very old name in the British gun trade.

The Gallyon is a radically different shotgun, relentlessly tested and designed for reliability and built not only with the imminent challenges we face in game shooting in mind, but also future generations. A modern British heirloom, inspired by technical knowledge and expertise; it is a thoroughly British revolution. The makers hope they can offer the discerning shooting man or woman the holy trinity of gunmaking – a gun that handles and shoots as a British gun should; that isn’t fragile and at a decent price. The hope is that the new owner will become a custodian of the Gallyon, handing it down to the next generation; a thoroughly modern inheritance.

Holkham deluxe – fully hand engraved to the Gallyon design (other requests subject to price adjustment) and with exhibition wood – £39,950 plus VAT