The history of Christmas crackers is one surrounded by controversy. Even their original inventor is a source of on-going debate.

It was the Victorians that invented this epitome of throwaway Christmas culture. Indeed, the Victorians invented much of what we recognise as our festive traditions. Christmas cake was introduced by Queen Victoria, with the fruitcake based on the Twelfth Cake. (Read The Field’s guide to the best Christmas puddings.)

THE HISTORY OF CHRISTMAS CRACKERS

While nobody argues that the history of Christmas crackers began in the late 19th century, there’s an on-going debate about their actual inventor. Some credit a chap called James Hovell, while one school of thought believes it was an innovative Italian by the name of Sparagnapane. But most side with the far less exotic-sounding Tom Smith, a confectioner from London. 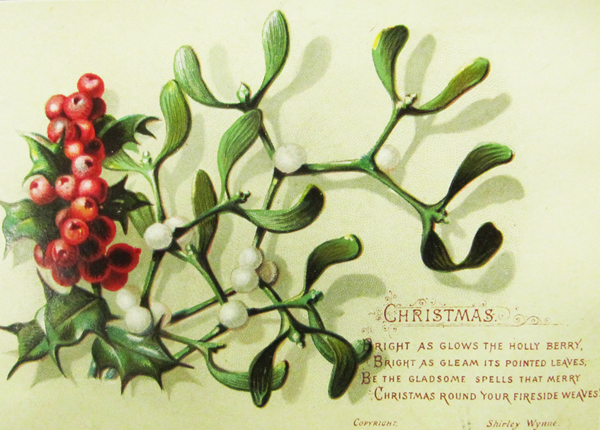 Holly and mistletoe are as much a part of a festive Christmas as Christmas crackers.

Give or take a few years, the the history of Christmas crackers began in 1860. It took not one but two Eureka moments to create the cracker as we know it. Supposedly, Tom Smith travelled to Paris in the 1840s where he was taken with bon-bons, sweets wrapped in a colourful twist of paper. Some time later the crackle of a log in the fireplace of the Smith family home gave him the idea for the snap.

“Who knows the truth?” says Peter Kimpton, an authority on the history of Chrismas crackers (the world’s only cracker historian) and author of The King Of Crackers. Perhaps Tom Smith was simply an excellent marketing man and did a good job in getting the message out that the idea was his. Regardless of who should claim the credit, there’s no denying it was a cracking invention, and one that has lasted 150 years.

Very little has changed in this time. To stay ahead of competitors, who had also started to produce bon-bons, Smith added a motto and, later, small trinkets.

“Tom Smith was brilliant at spotting gaps in the market and coming up with new ideas. For example, there were special crackers for spinsters and bachelors,” explains Kimpton.

“In Victorian days, people had the luxury of time to produce beautifully printed crackers and boxes. The mottos inside would have been poetic and romantic. Because there was nothing like radio or television for entertainment, much more would have been made of the crackers during the Christmas meal. A family would probably spend a long time poring over the crackers and comparing their contents,” he adds.

Decoration for cracker boxes was a serious business. Even the great Munnings started his working life producing designs for Caley’s, another important maker. “Proofs still exist of Munnings’s work with comments from him such as ‘Not my colours’ or ‘Not my layout,'” reveals Kimpton. “The crackers and boxes were beautifully decorated along various themes. Not only are they fantastic works of art, they’re also a chronicle of social history.”

The Royal Family, suffragettes, the Scout movement and the Thirties’ obsession with a Channel tunnel are just a few of the hot topics that found themselves on crackers. The festive bangers also helped with the war effort. Patriotic and militaristic decoration such as an English Tommy with a German eagle on a lead poured scorn on the enemy and boosted morale. During the Second World War the government even used cracker snaps to imitate gunfire for some fairly rudimentary troop training. This meant that cracker production was banned during the war.

According to Peter Kimpton, the period from the 1890s up to the end of the First World War was the heyday of the cracker, and then from 1953 one city was at the very centre of this flourishing festive industry: Norwich.

“Norwich was the cracker-making capital of the world,” he explains. “Several major factories, including Tom Smith’s and Caley’s, were based there. I worked for Tom Smith’s between 1986 and 1992 and even then we were making more than 50 million crackers a year.” 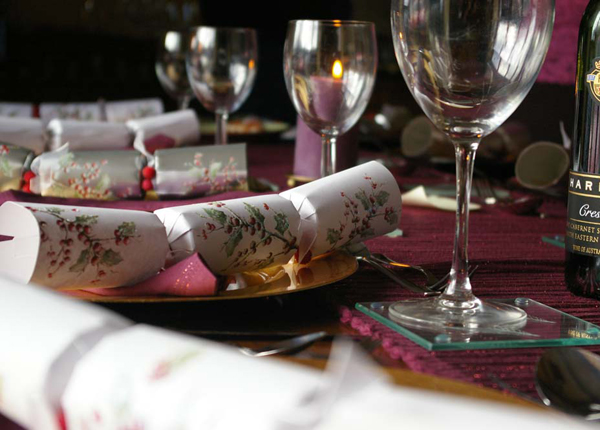 The festive table is incomplete without a Christmas cracker.

POSH CRACKERS GO WITH A BANG

One way of ensuring there’s something more inspiring than a comedy moustache in your cracker is to make or customise your own, something the Royal Family is said to favour. The disparity of cracker contents is one of the wonders of the festive season but, just like the awful jokes and the paper hats that always tear or fall off, ridiculous and sometimes useless prizes are half the fun and have become a Christmas tradition in their own right.

“The pointless plastic shapes that nobody could possibly want – except for small children who might choke on them – are always a source of amusement and bewilderment. Who designs them and what on earth could anybody want a plastic monkey for?” says Billie Baker from party planner Portfolio Events. “Mind you, I think most of us secretly like the mini sewing kits, padlocks and that sort of thing, they always come in handy.

“No matter how badly made they are or how laughable the contents, crackers are at the heart of a good Christmas party,” she continues. “They’re a great ice-breaker: if you’re sat next to someone you don’t know comparing prizes and groaning at the gags is a good way to get the conversation flowing. Crackers are also wonderful levellers as it is absolutely impossible to look good in the silly hats.”

This article was originally published in 2014 and has been updated.

China And India Jostle In The Indian Ocean – Analysis

I’m a 34G-cup – how I use boob tape to make my chest defy gravity, there are two important tips to follow