On paper, the film is an impossible task: a sequel to one of the top 10 highest-grossing films of all time, that piles an intricate reimagining of Namor, one of Marvel Comics’ oldest characters, on top of an introduction to Ironheart, a new teen superhero already set to get her own Disney+ show, while rebuilding around the shocking, tragic loss of its lead Chadwick Boseman, who played King T’Challa, the titular hero. In the midst of all that, Bassett had to embody the heartbreak and resilience of Queen Ramonda, T’Challa’s mother.

“Life and art were hand in glove in the making of this movie,” she told IndieWire over Zoom, the night before the film’s release. “I was just so proud. Just so, so proud of us, as humans too, in the way that it was approached and carried out.”

Already, on the eve of the latest Marvel Cinematic Universe entry pulling in $180 million — the biggest November opening of all time — Bassett felt the anticipation for the movie validated the tumultuous ride to its completion. “Even in grief, there’s such hope,” she said. “Hope remained. And hope is the expectation of something good. That’s the mission of hope, that something good will come eventually. You just gotta go through it.”

Although she was one of the marquee names key to the success of the first film, Bassett wasn’t entirely sure that Queen Ramonda, regent of the technologically advanced African nation of Wakanda and parent to T’Challa and Shuri (Letitia Wright), would play a part in the sequel. “At the end of [‘Black Panther’] I didn’t know if I was coming back. I certainly hoped I would. I didn’t die,” she said. In the wake of losing Boseman, when it became clear the movie was still happening, Bassett received a call from writer-director Ryan Coogler.  “Ramonda now has got to step up,” she recalled him telling her. “She’s got to be there for Shuri, she’s queen. You’re just a very important place in this movie.” For Bassett, “it was scary,” she said. 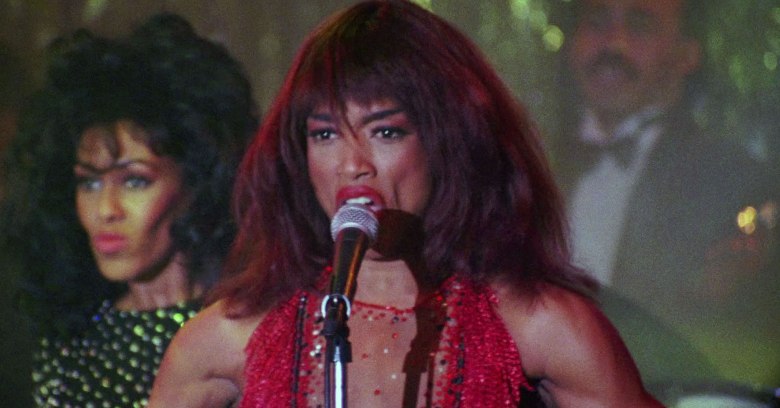 Playing a powerful woman at the most vulnerable, challenging moment in her life is Bassett’s bread and butter. Decades later, her Oscar-nominated turn as Tina Turner in “What’s Love Got to Do With It?” is still regularly clipped and shared in reverence across social media platforms. Same goes for roles like Katherine Jackson in “The Jacksons: An American Dream” miniseries and Bernadine in “Waiting to Exhale,” all parts that feature at least one triumphant scene where the actress can rise up and fight back. But even with all that experience, Bassett still found difficulty in navigating where exactly Ramonda would be after such a tragedy.

“I just felt a responsibility,” said the star. “I remember the first day, the first scene where I had to sit [on the throne], it’s like, ‘How exactly do I sit here? What is the best posture to convey who she is?’” She decided, “First of all, you acknowledge that feeling that you had that T’Challa/Chadwick sat here, and should be sitting here. And then here comes Killmonger, he sat there for a minute. And who deserves [it]? Who has the right to sit here? Yes, in this moment, in this time, it is Ramonda. But how do I hold that posture? How do I lead?”

Bassett was thankful to have Coogler there to guide her. “He’s extremely clear on the story and what he’s doing, but the way he carries himself around the cast and the crew. It’s so collaborative. He’s so self-effacing,” she said. “That impostor syndrome that we’re feeling or whatever, he will just say it out loud. ‘I don’t know about these words. Are you OK with them?’ And he really invites you to have your say, be a part, which is wonderful. He doesn’t straightjacket you.”

However — and here another spoiler warning is warranted — Bassett revealed that the decision to kill Queen Ramonda was not a plot point she was very keen to initially. “I objected,” she said. “Yeah, I was like, ‘Ryan, what are you doing? Why? You will rue the day! You will rue the demise of [Ramonda]. People are gonna be so upset.'” Then Coogler, known for his cool-headed demeanor, explained himself. “‘He was like, ‘Angela, I know, I know, but look, to die is not really to die in this world. It doesn’t really have to mean that.’” She was assured of his choice after thinking back on how many characters “poofed” back to life in “Avengers: Endgame,” reversing Thanos’ catastrophic snap of the Infinity Gauntlet. It wasn’t unthinkable, she reasoned, that she might come back some day. “All kinds of crazy things happen,” Bassett said.

For now, though, Queen Ramonda is yet another “Black Panther” character audiences have lost. On the other hand, Bassett’s dynamic performance — which has put her in serious contention for Best Supporting Actress — won’t soon be forgotten. “I always think about trying to make something memorable,” she said, reflecting on her legendary filmography. 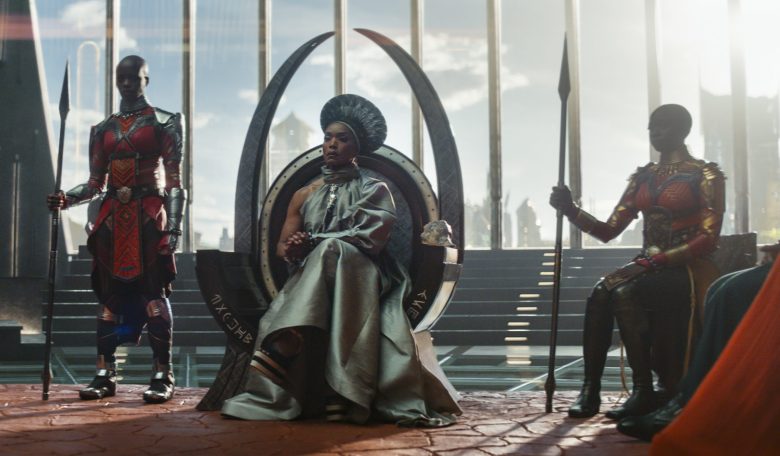 Bassett noted that high-profile roles like Ramonda were hard for her to fathom early in her career, when she often settled for gigs like “Reporter #3” to earn her rent money. But she always had a strong sense of how she wanted to be portrayed. The actress recalled seeing a TV movie script with a scene where the character she was being asked to audition for had her head shoved into a dog bowl. “That’s not an image that I want to put out there,” she said. “I wasn’t going for it, unless they come back and she kills him and strings him up by his heels.”

With time, she unlocked the kind of screen persona that appealed most to her. “I try to be all the way vulnerable, but there’s still a fire,” she said. “I want women to rise and fight back.”

Bassett listed the elements of Ramonda that fit that criteria: “It’s a mother’s fierce love for her family. It’s even in times of grief, never forgetting who you are, where you’re from. ‘Don’t forget always the old ways. Take the now and take something from the past.’ That sisters are leaders, and protectors, it’s all of that that’s in there, and it’s brilliant.”

Despite her early ambition, seeing a global audience come together to appreciate a film with strong Black women at its center exceeds Bassett’s former goals. These days, she has been considering her legacy. “The audience is family to me, and theater is sacred to me,” said Bassett. “And so I always think about how it’s going to last. It’s gonna last on celluloid or digital or whatever you want to call it. It is going to last when I’m long gone.”

Klarna Seeks to Attract More Creators to Its Platform

Today24.pro
Crypto Lender Matrixport Raises Valuation to $1.5B Despite FTX Collapse One of The Greatest Britons in History - Joe Calzaghe I make $1,000 a month by promoting Amazon products on social media. It only takes 5 hours per week — here's how I set up my side hustle. ‘How many Uber drivers does it take to pick up a disabled person?’: Disabled person says 3 Uber drivers canceled on them because of their service dog