JAMES MADDISON has England fans in hysterics after “doing an Ashley Cole” in the squad photo for the World Cup in Qatar.

The Leicester City star has been pictured along with the rest of the Three Lions squad but was awkwardly leaning into the picture from the side.

James Maddison reported for duty alongside the rest of the England squad.[/caption]

Fans have reacted to the picture on social media as they have spotted the similar pose to that of Ashley Cole.

The former Chelsea and Arsenal defender had a similar stance in his squad photo when he was at Roma in 2014. 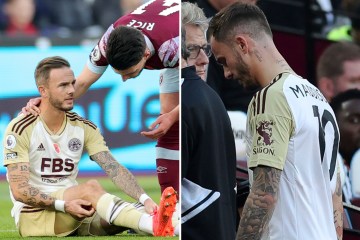 A third added: “James Maddison with a wonderful homage to Ashley Cole.”

The midfielder had an injury scare in his final Premier League game before the break for the World Cup.

Having scored the opener with a thumping finish, Maddison was forced off early against West Ham at the London Stadium.

However he eased fans concerns after the game as he revealed the knock was not a serious one.

He said: “Injury isn’t too bad! A small problem that was causing a bit of soreness.”

Airtel 5G Plus now available in Patna: Check out coverage in your area

Who is Cristiano Ronaldo’s dad, what was his job and how old was the Portugal star when he died?

Today24.pro
‘How many Uber drivers does it take to pick up a disabled person?’: Disabled person says 3 Uber drivers canceled on them because of their service dog It's not just you. Disney's CEO reportedly thinks its theme parks have gotten too expensive. Crypto Lender Matrixport Raises Valuation to $1.5B Despite FTX Collapse I'm convinced Facebook Marketplace is Meta's best feature after I furnished my new apartment with used furniture