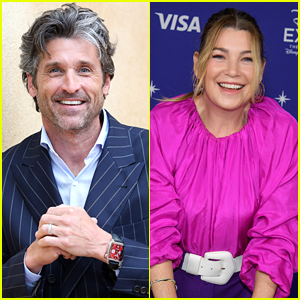 Patrick Dempsey is opening up about the possibility of working with Ellen Pompeo again one day.

The duo famously starred as Derek and Meredith on Grey’s Anatomy for many seasons, before his character was killed off. However, he did return in a dream sequence in the most recent season.

In a new interview, Patrick is opening up about his want to work with Ellen again.

Speaking with Extra in a new interview, Patrick said that he’d “love to work with her again” before saying that he already has a “couple ideas” on how they could reunite.

“I’ll tell her first and then see if we can realize them,” he added. “It has always been a really special relationship Ellen and I have had together in front of the screen and behind it as well.”

Patrick added that he and Ellen had an instant connection “right away…I think a lot of the success of the show was because of the chemistry and the relationship. People want to believe in love.”

Ellen and Patrick were most recently at the 2022 D23 Expo, however, didn’t reunite while there.