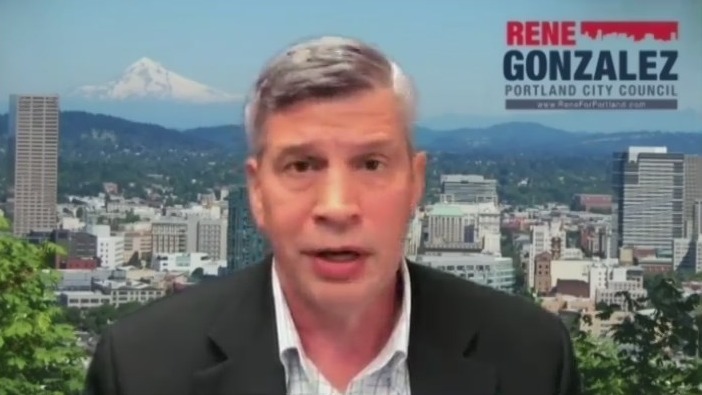 PORTLAND, Ore. (KOIN) -- The campaign for Rene Gonzalez, who is challenging Jo Ann Hardesty in the Portland City Council race, is facing a $77,000 fine for a campaign violation.

The Small Donor Elections program with the city sent a letter to the Rene for Portland campaign on Tuesday, saying the campaign was given a 96% discount on a downtown office space and did not report it.

The letter states the more than 3,000-square-foot office space, which is owned by Portland developer Jordan Schnitzer, is advertised online at nearly $7,000 per month, but the campaign is paying $250 plus utilities. Records with the Oregon Secretary of State's Office show Schnitzer contributed $250 in May 2022 to Gonzalez's campaign.

The letter was first reported by Oregon Public Broadcasting.

In a statement to KOIN 6 News, a spokesperson for Gonzalez's campaign defended the lease, saying the campaign "strongly" disagrees about the low price of the rent "given the dismal state of downtown" and adding the campaign intends to appeal the Small Donor Elections program's finding.

Leaders express frustration with Portland’s homeless issue. So how did we get here?

"We evaluated OAE rules when we entered into the lease and strongly disagree that the rent is too low given the dismal state of downtown.

"Downtown is in shambles because of policies advocated by my opponent, Jo Ann Hardesty – defunding the police and obstructing cleaning up unsanctioned camps. Landlords are desperate to get any kind of compensation for their space because of the city's failures to address crime and homelessness has made downtown inhospitable to tenants, landlords and visitors.

"In this case, the landlord has continued to market the property and can remove us on 30-days notice, but has been unable to lease the property to others despite continued efforts to do so. We took the space 'as is' despite homeless encampments around the location, extensive vacancies in the area, and required no tenant improvements prior to leasing.

"We stayed despite our office being vandalized.

"There is a man smoking fentanyl in front of our building as we write this.

"Landlords are having to offer substantial amounts of free rent months, secured parking and invest in tenant improvements to get tenants to even consider renting downtown right now.

"Our compliance team is reviewing the complaint and we definitely intend to appeal this initial finding."

Susan Mottet, who sent the letter to the Rene for Portland campaign, told KOIN 6 News the campaign has yet to file an appeal as of Wednesday afternoon.

Meanwhile, Hardesty's re-election campaign told KOIN 6 News this shows Gonzalez is supported by those who "profited by making housing in Portland unaffordable and unavailable to working people."

Read the full statement from Hardesty's campaign below:

"This just proves that my opponent is supported by the same wealthy developers who profited by making housing in Portland unaffordable and unavailable to working people, and has directly led to an increase in our homeless population.

"Those same developers are sitting on thousands of vacant units that could house people tomorrow. Voters can trust that I will always put everyday Portlanders first by fighting to build more affordable housing faster, emergency shelter, and real solutions for community safety."

A Wyoming man reportedly died in jail 19 days into his stay that was filled beatings that resulted in black eyes and broken ribs, his family alleges