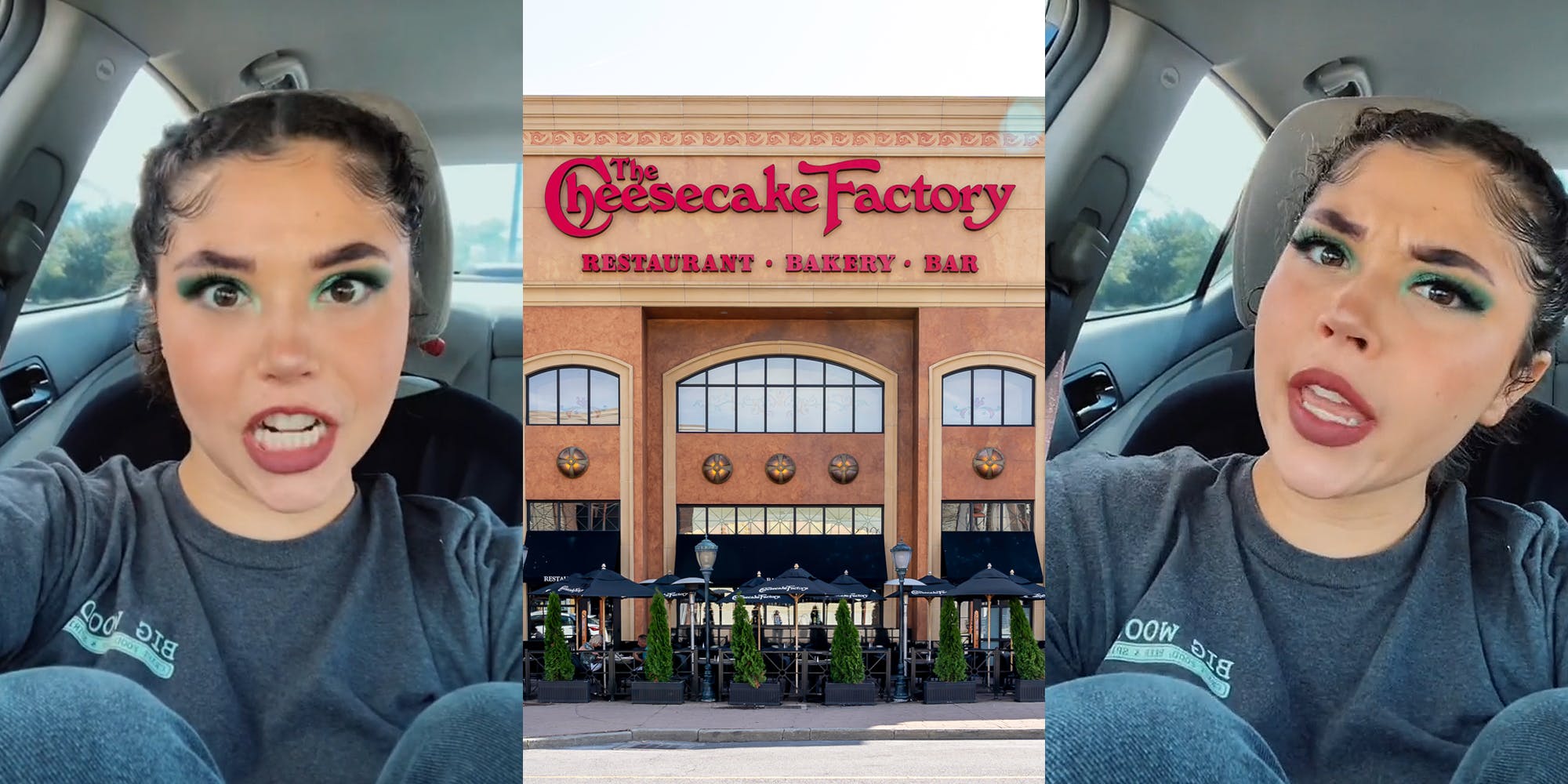 A worker says she was fired from Cheesecake Factory after her manager allegedly approved for her to seek medical treatment for an ear condition during her training in a now-viral four-part storytime.

In the storytime series posted by TikToker Destiny Garrett (@prinsaucedenise) on Sept. 19, she says that she was "hired at the Cheesecake Factory" in Indianapolis a month and a half prior.

"My ears have been giving me problems for the past two months. The second week of training, I couldn't even open my mouth. I couldn't talk," Garrett explains. "So I called in, I talked to a female manager. She said, 'OK, we will figure out the rest of your training. Feel better. Go to the doctor. Call us when you feel better.'"

Garrett continues that the next day she received a notification from HotSchedules, a scheduling platform, that three of her shifts had been "released."

In part two of the storytime, Garrett says that another "female manager" named Brittany told her that HotSchedules may have automatically taken her off of the schedule due to a missing alcohol certification.

"She tells me, 'Go ahead and resend that and your liquor license, and we'll take care of it,'" Garrett says. "So I send them, right? Then I get an email from the original manager who I spoke with."

The email reads, "Destiny, you have never returned or called after you called off sick for a training shift. Is this email your way of saying you want to come back?"

In a response email, Garrett explains that she spoke with a different manager the day prior, apologizing for the "misunderstanding." After sending the email, she says she called the store "last Monday" and spoke with a third manager, who said the original manager would call her back. According to Garrett, "[the manager] never did."

In part three, Garrett says that she called and emailed the store again but was "ghosted" for several days until she was able to get in touch with the original assistant general manager, "Melissa."

"Now it's Friday, and I already know that I have a check there that I have to pick up. So I call, and as soon as Melissa picks up, I tell her who I am," Garrett says in the clip. "I basically say to her, 'I don't really know what's going on, but you guys have ghosted me for the last week.' I proceeded to tell her that if they wanted to fire me, they could do it by not ghosting me and instead formally letting me go."

Destiny says that her manager then said that they had "decided to move on" because she didn't "show up for three shifts." She continues that she explained that the shifts had been "released" on HotSchedules, but Melissa maintained that Garrett "knew" that she should still come in.

"It was released from me. What do you mean?" Garrett says. "So when you take me off the schedule, I'm still supposed to know that [I work]?"

In the final part, Garrett says that her manager suggested that she "reapply" after formally firing her.

Part one of the storytime series has garnered over 120,000 views as of Sept. 21, with commenters suggesting that Garrett take legal action over her claim that she was "wrongfully fired."

"I would say this falls under wrongful termination since you were sick and had a doctors note, might wanna look into it," one commenter wrote.

"You can’t be fired for being sick, they have to have another valid reasoning," another said.

"You were under doctors orders you can sue," a third added.

Others shared their own experiences of being fired for seeking medical treatment.

"One time my job fired me because i was put on an involuntary hold in a mental hospital for 5 days and i even had my mom call them before hand," a user wrote.

"Girl this happened to me while I was legit in the hospital. I had been working there for over a year!!" another said.

Some shared an overall experience of working at Cheesecake Factory.

"I worked at cheesecake too, worst job i’ve ever had in my entire work experience," a user said.

'Current cheesecake employee and i cry before and after every shift it is so terrible," another wrote.

The Daily Dot reached out to Garrett via email and to the Cheesecake Factory via email contact form.

The post ‘Worst job I’ve ever had in my entire work experience’: Server says she was wrongfully fired from Cheesecake Factory after calling out to receive medical treatment appeared first on The Daily Dot.

Today24.pro
Trump Claims He Declassified Documents Using Special Powers! The 31 most stunning photos across women's sports from the last month — Tennis, European Championships, and more How to Get MICROSOFT OFFICE for FREE in 2022! Sweet Potato Souffl