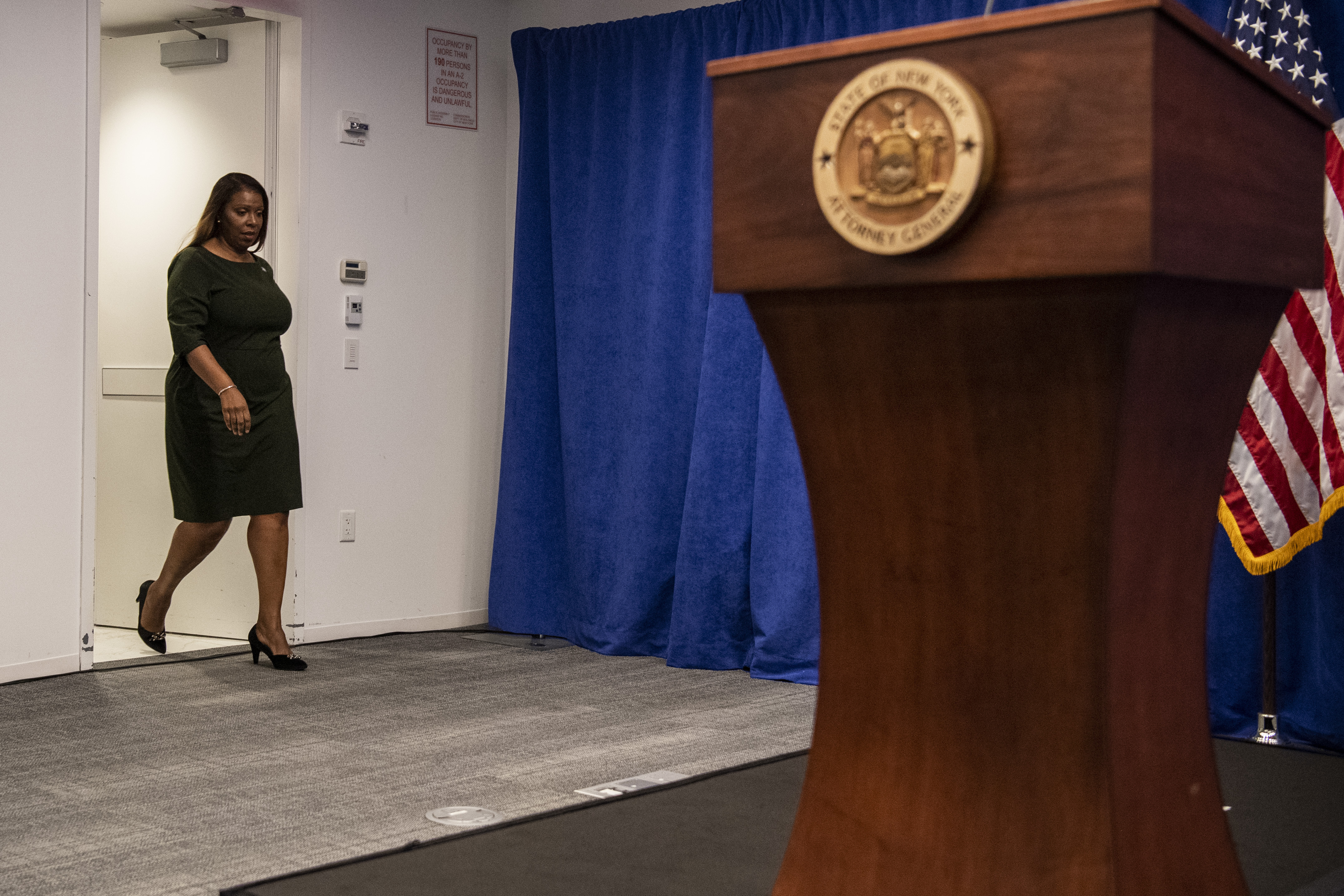 One break for Trump: It was only a civil suit and not criminal. However, James is seeking draconian penalties: a five-year ban on Trump buying commercial real estate in New York or applying for loans, and a permanent ban on Trump and his three eldest children being in the leadership of any New York business for the rest of their lives.

The case also seeks to force Trump, his kids and business to surrender $250 million she said was obtained through flagrant deceit that extended over a decade.

Here are some of POLITICO’s top takeaways from the suit James filed:

A Trump trial on James' suit? Don’t bank on it

Legal analysts are already debating the finer points of the suit and whether it will or won’t hold muster in court. Her civil suit might fly despite Manhattan District Attorney Alvin Bragg Jr. balking at filing criminal charges over the same conduct.

For one thing, James only has to prove Trump’s conduct was fraudulent or illegal by a preponderance of the evidence, not beyond a reasonable doubt as would be necessary in a criminal case. If it seems more likely than not that Trump knew of false valuations or instructed subordinates to inflate assets and income, that may be enough for James to prevail.

Trump could also be hurt by his numerous invocations of the Fifth Amendment, which can be used against him in the civil suit.

But there’s a good chance the true legal merits of the AG’s suit will never be tested in court. Both sides have strong incentives to reach a settlement. Pursuing the case through to completion could take years and there’s no guarantee that a judge will agree to grant all the relief the AG asked for. Trump seems to have an even stronger incentive to compromise, since the punishing sanctions James is seeking could amount almost to a death sentence for his business empire.

Trump’s lawyers have already made a settlement proposal which James turned down, but her aides said her office isn’t seeking any immediate court action against Trump, like an injunction that would swiftly drive him out of business in New York. And the AG seemed to emphasize her willingness to deal on the onerous punishment she proposed Wednesday.


Is 'everyone-does-it' a defense for Trump?

Trump’s legal team has suggested that any rosy analyses of Trump’s financial condition in statements submitted to banks is consistent with the practice in the world of real estate and bank financing.

Indeed, his attorneys have argued that bankers were not actually deceived by the alleged asset inflation because they produced more conservative internal assessments before approving the loans to Trump.

Trump himself leveled a version of the “no harm, no foul” defense on his Truth Social media site Wednesday, saying that the banks and insurance companies involved “were fully paid, made a lot of money, and never had a complaint about me.”

However, James’ office appears to be taking the stand that whether the banks were or were not actually tricked isn’t relevant to the legal case — that the alleged intent to deceive on the part of Trump, his children and top aides in order to get a financial benefit is sufficient to constitute a violation of the law.

James has also said that whether the other parties in Trump’s deals sustained a loss also isn’t relevant, so she can pursue these violations even if the banks profited from the deals.

James is trying to get the suit heard by New York Supreme Court Justice Arthur Engoron, who issued orders requiring Trump and his family members to sit for depositions in the probe. The judge seemed largely unsympathetic to Trump, so if the case winds up staying with him the former president could be in for a rough ride.

In a section dubbed “Ongoing Scheme and Conspiracy,” James’s suit notes that some of the documents seized by the FBI from Trump’s Mar-a-Lago estate on Aug. 8, 2022 — revealed in federal court filings to include tax-related records — may have been withheld from her investigators.

“Documents concerning taxes and accounting information would appear to be responsive to OAG’s subpoenas, but no such documents for Mr. Trump were produced,” according to the lawsuit.

James referenced a declaration form Trump attorney Alina Habba, who asserted that she conducted a thorough search of Trump’s Mar-a-Lago office and storage areas for any records relevant to James’ investigation. Her search came just days before the Justice Department issued a subpoena for any records with classified markings held at Mar-a-Lago.

Some long-lost figures scrutinized by congressional investigators and Special Counsel Robert Mueller also make cameos in James’ lawsuit. In a section alleging fraud against insurers and underwriters, the suit contends that Trump declined to disclose “any circumstances involving Russia and the 2016 presidential election” during a Jan. 10, 2017 meeting with underwriters meant to evaluate potential risks amid Trump’s effort to restructure his limited liability policies.

But later, underwriters flagged a series of Russia-related matters as potential causes for concern, including the June 2016 meeting at Trump Tower between Donald Trump Jr. and Natalia Veselnitskaya, a Russian lawyer who offered opposition research on Hillary Clinton. Trump Jr. claimed he had no interest in the information and it became a chapter that was largely consigned to history after the Mueller report was released.

Was $100 million windfall on Trump’s DC hotel based on lies?

Trump’s one-time marquee property in DC that became a key spot for Trump aides & allies to see and be seen during his presidency, the Trump International Hotel in the Old Post Office building on Pennsylvania Avenue, accounts for a huge part — roughly $100 million — of the $250 million-dollar value of the newly-filed suit.

The attorney general’s complaint says Trump used a wildly inflated personal financial statement essentially to trick Deutsche Bank into providing $170 million in funding for the luxury hotel project at a lower interest rate than it would have charged without the backing of Trump’s personal fortune for the effort.

Trump sold the hotel in May for a tidy profit many didn’t expect: $100 million. However, any difference in interest rates between what Trump paid and what the AG says he should have paid doesn’t come close to that figure. Yet James is taking the aggressive stance that Trump should have to fork over every penny he (and his family members) made on the whole hotel investment.