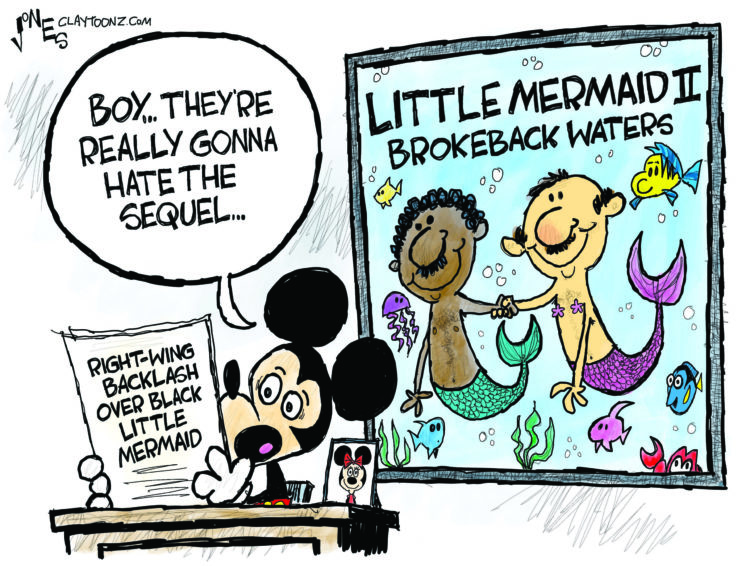 As this article in The Tempest points out, right-wingers have been upset over a black Little Mermaid since at least 2019.

Some conservatives are using the term “blackwashing,” stealing the term “whitewashing,” which is when a white actor plays a non-white character. I saw a few posts saying Disney should now do live remakes of Princess and the Frog and Moana, but cast white actresses to play Tiana and Moana.

But Tiana is black and Moana is a Polynesian. Ariel’s race in The Little Mermaid isn’t important to the story. Plus, fish girls do not actually exist.

Some people who’ve criticized the casting of making Arial black claim Disney is making a black actress piggyback on an old story. They would rather Disney create new stories and new princesses and make them black, so they can have their story.

I don’t mind there being a black mermaid and I think it’s a good thing because it makes a lot of black little girls happy. But I’m also on the side of making new stories instead of making remake after remake. Do we really need two Little Mermaids, Two Lion Kings, two Lady and the Tramps, Two Mulans, Two Parent Traps, Two Dumbos, two Pinocchios, two Jungle Books, Two 101 Dalmations, two Beauty and the Beasts, two Pete’s Dragons, two Cinderellas, two Aladdins, etc, etc? Actually, some of these have been made more than twice.

I don’t mind some of these remakes, such as Junge Book. Who didn’t like Bill Murray as Baloo? But I also want new stories. I love Disney movies, especially animations. I want new stories to marvel at, like when they came up with Wreck-it Ralph (which I’ve watched about ten times by now and will watch again). Of course, that film also had a sequel, which included every Disney princess ever which was fun.

Don’t get upset over stuff like race or sexual identity in movies (I suspect Vanellope von Schweetz might be a lesbian). Just sit back and enjoy them.

I’m also on the side of making new stories with diversity in the lead characters. While I like a black Little Mermaid, they should do more new stuff like Princess and the Frog, Aladdin, Pocahontas, and Moana.

Pixar recently gave us Soul, which has a black lead though I don’t think Jamie Foxx counts as a Disney princess.

Visit Clay Jones’ website and email him at Clay@claytoonz.com.