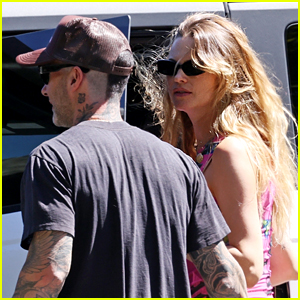 Adam Levine heads out with Behati Prinsloo amidst rumors of an alleged affair on Wednesday (September 21) in Los Angeles.

The 43-year-old Maroon 5 frontman was photographed wrapping his arms around his 34-year-old model wife as they spoke to each other. Both were dressed casually and had sunglasses on. Adam was wearing a hat.

The couple have been married since 2014, and Behati is currently pregnant with their third child. The excitement of the pregnancy announcement was tempered by allegations leveled against Adam by Instagram model Summer Stroh.

Adam issued a statement denying that he was unfaithful to his wife but admitted that he “used poor judgement in speaking with anyone other than my wife in ANY kind of flirtatious manner.”

Since he responded, more women have accused Adam of sharing flirty messages.

In case you missed it, a source weighed in on how Behati feels about the accusations surrounding her husband at the moment. Find out the answer here.