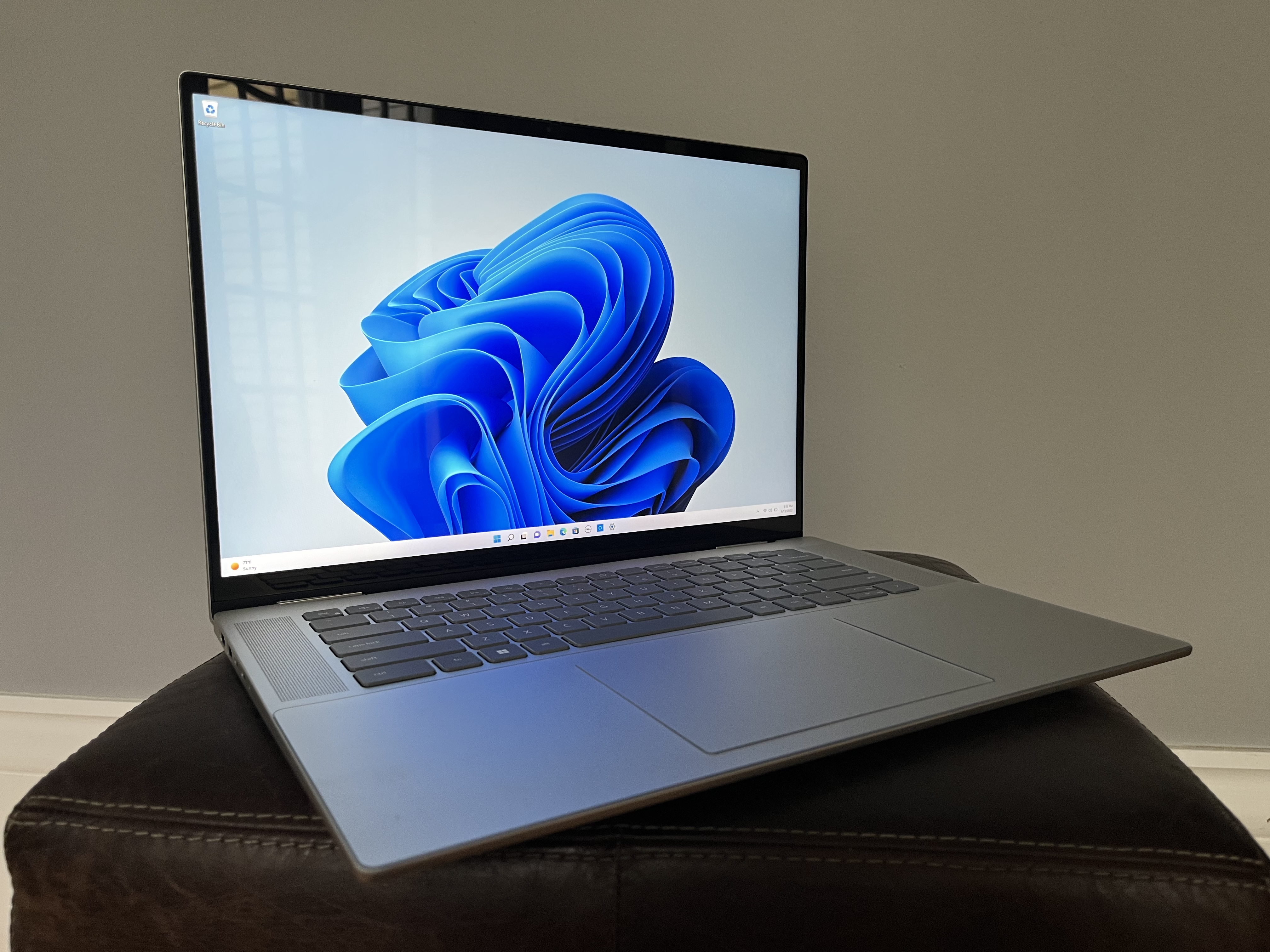 A better laptop than tablet, the Dell Inspiron 16 2-in-1 boasts a functional and attractive design based on a 16-inch 16:10 display and all-day-and-most-of-the-night battery life.

The Dell Inspiron 16 2-in-1 is a roomy convertible laptop based on a 16-inch, 16:10 display. The display offers a spacious workspace in laptop mode, but it feels too big in tablet mode unless you are a content creator using it as a large canvas. And, if you are a creative pro looking for a spacious convertible, you may be disappointed by the limited upgrades Dell offers for it. While you have your choice of two 12th-gen Intel Core processors and can opt for a UHD+ OLED display, the only GPU upgrade available is an entry-level mobile GeForce MX part. And you can’t upgrade the 512GB SSD.

For basic use, our Inspiron 16 2-in-1 as configured with its 12th-gen Core i7 CPU and 16GB of RAM offers strong application performance and a display big enough to multitask without feeling squeezed. The keyboard and huge touchpad are comfortable, and the overall design of the aluminum chassis is clean and compact. We also like the 1080p webcam with its physical privacy shutter and the legendary battery life. The Inspiron 16 2-in-1 is a smart pick if you want a big-screen convertible that will be used primarily as a laptop and pressed only occasionally into tablet duty.

Some premium 2-in-1s include a pen for the touch display, but Dell does not include one with the mainstream Inspiron 16 2-in-1. Dell’s active pen is sold separately; it usually costs $50 but can often be found for $40 from the manufacturer.

A large display fit for a laptop

Our Inspiron 16 2-in-1 test system is based on a 16-inch 16:10 display with a 1920×1200 resolution. This FHD+ resolution is enough to produce a sharp picture across the 16-inch panel. The reason to upgrade to the UHD+ OLED display is more for the OLED panel and the incredible contrast you get with it rather than the increased resolution. The baseline display we received offers a dynamic image with bright whites and inky blacks, even if it falls short of absolute black. It’s rated for 300 nits, and my measurements put its peak brightness closer to 400 nits. It’s bright enough for indoor environments, even in an office that receives lots of natural light.

The 16-inch display with its 16:10 aspect ratio provides ample room to navigate Windows and multitask. The added vertical space compared with a 16:9 display results in less scrolling through long Word docs, expansive Excel sheets, and web pages. It’s really a fantastic size for a work computer where you are juggling multiple windows, and its spaciousness is also useful for home use for watching shows or movies.

The big screen is less useful when you flip the display around and use the Inspiron 16 2-in-1 as a tablet. It feels oversized and awkward, especially when holding it in one hand and using the other hand to swipe or tap on the touch display. Creative types, however, might enjoy the large canvas of the roomy screen for sketching and drawing.

With its understated design, the Inspiron 16 2-in-1 will look the part at home or in the office. It features a thin, all-metal chassis in minimal adornment. In fact, there is nothing that would let you know it’s a Dell machine when you are seated in front of it. There is nary a company logo on the keyboard deck or thin display bezels. A simple Dell logo is centered on the lid, and the bottom panel has an Inspiron insignia.

A 16-inch laptop is a tweener in terms of including a number pad — some models include a numpad and others do not. The Inspiron 16 2-in-1 omits the numpad, and I applaud the move. Even if there’s room to squeeze in a numpad without shortening keys on the main keyboard, I’d much prefer to have the keyboard centered below the display. And that’s what you get with the Inspiron 16 2-in-1. The keys are dark gray with white symbols, and there is enough contrast between the two colors that the key symbols are legible in a variety of lighting conditions. And you get two-level backlighting for when you are working in the dark.

The touchpad is enormous. And it has a cool design in that it has only three borders, with the top edge blending seamlessly into the rest of the laptop. The touchpad offers smooth gliding and responsive, accurate recording of mouse gestures.

The webcam is another check in the “plus” column for the Inspiron 16 2-in-1. It’s a 1080p camera that produces a crisp, well-balanced image that’s clearly superior to that of a 720p webcam. It also has a physical privacy shutter so you can be sure no one is spying on you when the webcam isn’t in use. It’s not an IR camera, but you do get that and facial recognition capabilities if you upgrade to the OLED display. As it is, the only biometrics on our test system was the fingerprint scanner built into the power button.

The Inspiron 16 2-in-1 serves up not two but four speakers. It produces eight-watt audio from a quartet of two-watt speakers that fire upward from speaker grills flanking the keyboard. The sound has enough oomph to fill a small room and is more dynamic than typical laptop audio. Some separation can be heard between high and mid-tones, and there even is a hint of bass response. Music playback is more enjoyable on the Inspiron 16 2-in-1 than most laptops.

Connectivity covers the bases with a pair of USB-C Thunderbolt 4 ports and a pair of USB-A ports, an HDMI port, headphone jack, and SD card reader. Having both USB Type-C and Type-A ports means that you won’t need to carry an adaptor for your USB devices, but I would have liked the pair of Thunderbolt 4 ports to be split across the left and right sides of the laptop rather than both being located on the left side. You’ll need to use one of the ports to charge the laptop, and I like having the flexibility of plugging into either side of the laptop.

Our Dell Inspiron 16 2-in-1 features an Intel Core i7-1260P, 16GB of RAM, integrated Intel Iris Xe graphics, and a 512GB SSD. The Core i7-1260P is a member of Intel’s Alder Lake P series of 28-watt mobile chips. It features Intel’s new hybrid architecture with performance and efficiency cores; it has four performance cores, eight efficiency cores, and a total of 16 processing threads.

To see how the Inspiron 16 2-in-1 stacks up, we compared its performance to that of other laptops with the Core i7-1260P processor as well as one with a 12th-gen Core i5, a couple model with previous 11th-gen Core i7 chips, and one with a previous-gen AMD Ryzen 7. Most of the comparison systems rely on integrated Intel graphics like the Inspiron 16 2-in-1, but two feature GeForce RTX 3050 Ti graphics.

Our first benchmark is PCMark 10, which measures performance on everyday computing work including office productivity tasks, web browsing, and video chats. The Inspiron 16 2-in-1 got off to a strong start, easily topping the 5,000 mark and finishing behind only the Samsung Galaxy Book2 Pro 360 that features the same CPU and the pair of laptops that have the added benefit of RTX 3050 Ti graphics.

Our HandBrake benchmark tests how a laptop is able to handle crushing CPU loads over a lengthy period—in this case, transcoding a 30GB MKV file to a format suitable for Android tablets using HandBrake, the free video encoding utility. The Inspiron 16 2-in-1 again turned in a positive result, finishing the test faster than all of the other systems except the RTX 3050 Ti pair.

Next up is Cinebench, another CPU-intensive test but one that renders a complex 2D scene over a short period of time. The Inspiron 16 2-in-1 was competitive on Cinebench, finishing among the other systems that feature the Core i7-1260P CPU and integrated graphics. It is certainly up to the task of media editing and creation.

As its poor 3DMark result indicates, the Inspiron 16 2-in-1 is not built for playing 3D games. As with any laptop with integrated graphics, it’s better suited for 2D graphics tasks such as photo and video editing rather than running AAA titles.

To test a laptop’s battery life, we loop a 4K video using Windows 11’s Movies & TV app, with the laptop set to Airplane mode and earbuds plugged in. We set the screen brightness at a relatively bright 250 nits to 260 nits, which is a good brightness for watching a movie in an office with the lights on. The Inspiron 16 2-in-1 ran for more than 16.5 hours on the test, a truly outstanding feat. That would be a great result for a small, efficient ultraportable, so it’s downright incredible for a big, 16-inch laptop powered by a mainstream, 28-watt Intel Core P-series processor and not a more efficient, 15-watt U-series chip. With this laptop, Dell seems to understand that a large display requires a large battery and outfits the Inspiron 16 2-in-1 with a 6 Cell, 87 Wh battery.

As a mainstream laptop for home or work, the Inspiron 16 2-in-1 has a lot to offer, from its roomy touch display powered by a modern CPU to its sleek, all-metal enclosure and affordable price. We also liked the roomy keyboard sans numpad, huge touchpad, and impressive audio output. The star of the show, however, is its exceptional battery life that provides a runtime that’s hours longer than the competition. We strongly recommend the Inspiron 16 2-in-1 to mainstream buyers looking for a big-screen laptop. Our only hesitation would be for buyers who want a 2-in-1 convertible that will spend as much time in tablet mode as laptop mode. For such a usage scenario, we’d steer you toward a smaller 2-in-1 that’s easier to handle in tablet mode. And we’d also steer content creators looking for a large convertible to a model that offers a better graphics and storage upgrades.