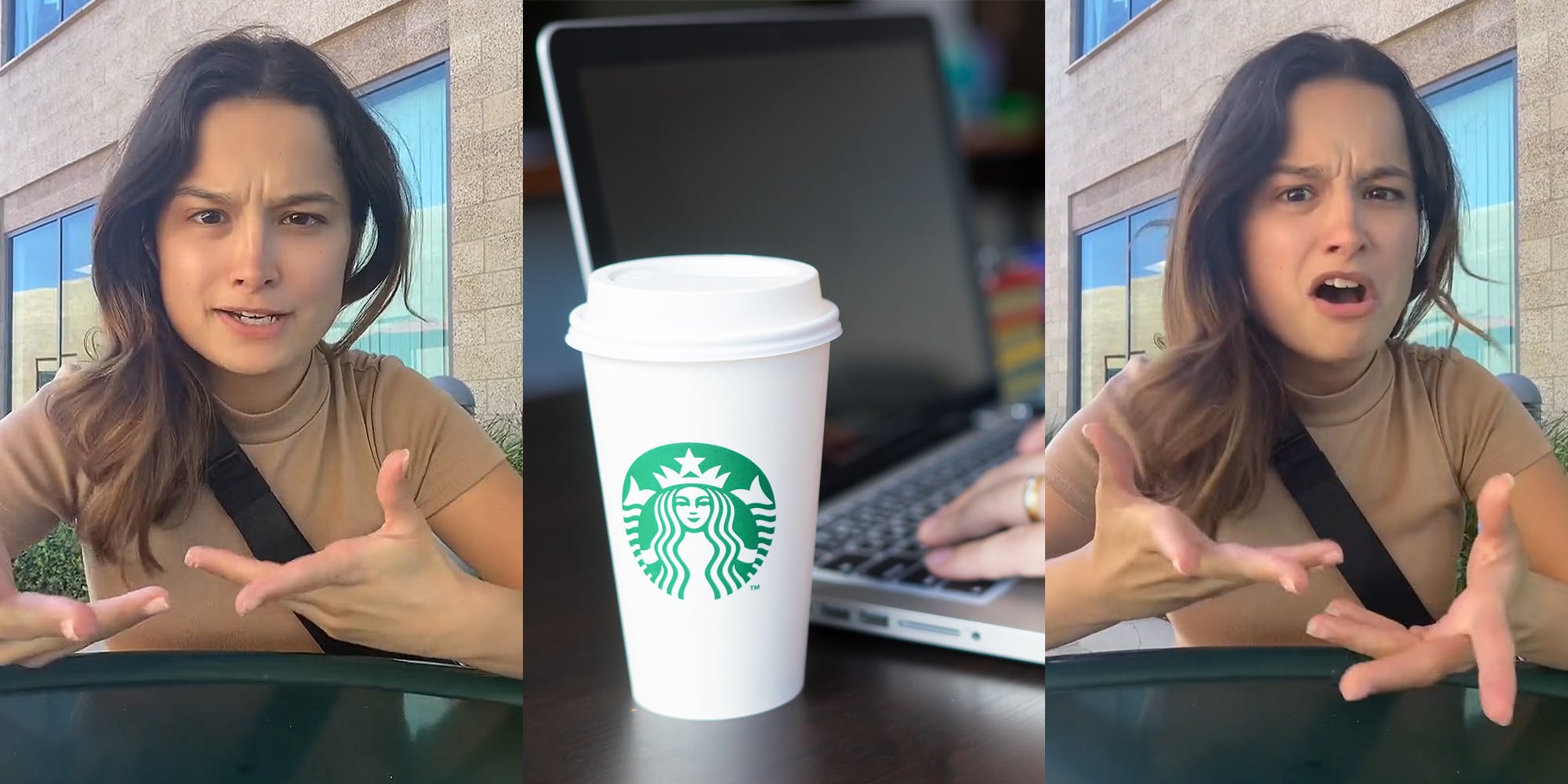 In a hilarious storytime, TikToker Brittany Lima (@_brittanylima) details an embarrassing Zoom job interview that she says she witnessed at her local Starbucks. The video amassed 2.2 million views in less than 24 hours.

She starts off her video by saying that "it should be fucking illegal to have interviews in public" but that it’s not, and it makes for great gossip.

Lima goes on to explain that while getting her morning matcha latte at Starbucks, she happened to notice a man doing a job interview over Zoom. "Naturally, I scoot my chair in, I put my hair behind my ears so they’re clear for hearing, and I sip my tea while I listen to some tea," Lima says.

She says that the interview started off normally with the man talking about his previous work experience and educational qualifications. From what she was able to overhear, Lima figured out that he was applying for some sort of managerial position.

However, things started to go off the rails when the interviewer started inquiring about the specifics of this man's managerial experience. When asked how many people he had managed at his last job, Lima relays that the potential candidate replied, “352.”

Now, anyone who’s managed a team knows that 352 is a pretty big number of people to have under you. Even global consulting firm McKinsey suggests that “the typical managerial span for a supervisor is eight to ten direct reports.”

Unluckily for the interviewee at Starbucks, the person interviewing him also noticed the unusual number. He commented that it was a surprising number considering that when he had googled the interviewee’s previous company, he couldn’t even find a website for it and assumed it was a small company.

Lima tells the camera that she figured the man at Starbucks had lied like many people do on their resumes, but that he would surely come up with something to cover it up.

But instead, Lima says the man told the interviewer, “I’m sorry sir, I lied.” Not only did the man confess to lying about the number of people he managed, he also said, “that job doesn’t exist.”

At this point, Lima seems to have given up all pretense of minding her own business. She says she put on her glasses to see the interviewer’s face and that his reaction “did not disappoint.” Lima says the interviewer, to his credit, tried to give the guy another chance, asking him if he had any managerial experience, and this is where, according to Lima, “the tea gets piping hot.”

Instead of covering his tracks, the man decided to get a little too truthful, Lima says. She recalls him saying, “I have never had a job in my life. My girlfriend is on her third pregnancy, and she says if I do not get a job, she’s about to kick me out.”

After 30 seconds of complete silence, she says the interviewer let out an audible sigh and said, “We can continue this interview, but you need to tell me the truth. Did you at least go to Los Angeles City College and get your associate’s degree?”

“This man fucking closes his laptop, stands up, and fucking leaves Starbucks,” Lima says while slapping her hand on the table in front of her. “Guess he was in a rush to manage those 352 employees.”

In the comments section, some users were as amused as Lima.

“No bc it sounds like the only truth on his resume was his name,” one said. Another said, "HAHAHAHA GIRLLLLLL that did not disappoint," to which Lima replied, "My thoughts exactly after I decided to drink my matcha inside today."

Others admired the man’s nerve. “I only wish I had that level of confidence,” one user said, to which Lima responded. “Actually same lmfao.”

“Meanwhile I’m sweating because I said I had a year of marketing experience but it was only 10 months,” another said.

However, some expressed empathy for the man interviewing. One person said, “My first thought was that “if he’s at Starbucks for an interview, he needs the free WiFi because he doesn’t have it at home” sounds like a sad sitch."

“I don’t blame him it’s hard out there,” another said.

The Daily Dot has reached out to Lima via email and Instagram direct message.

The post ‘It should be f*cking illegal to have interviews in public’: Customer warns against public interviews after overhearing one at Starbucks appeared first on The Daily Dot.

Report: Spurs continue to eye 20-year-old defender with ‘some interest’