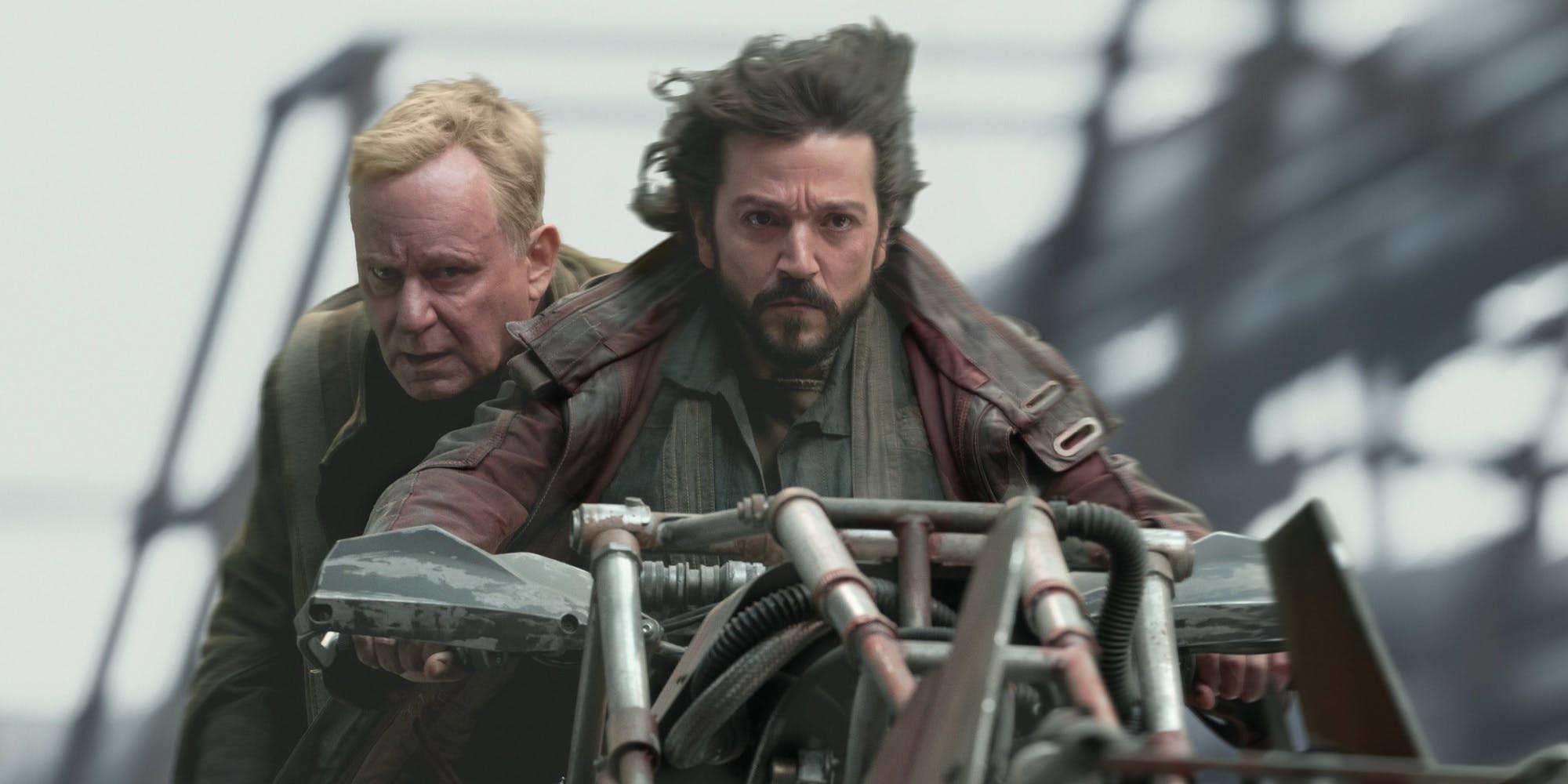 This post covers episodes 1-3 of Andor, with no major spoilers.

Screenwriting was not a priority for the first three live-action Star Wars shows. Benefiting hugely from fandom nostalgia and the charm of Baby Yoda, these spinoffs combined beloved characters with shallow, clumsy scripts. Andor changes the game, delivering a sharply-characterized thriller that prioritizes smart storytelling over nostalgia.

Reintroduced a few years prior to Rogue One, Cassian Andor (Diego Luna) is a familiar figure—manipulative, self-sufficient, perpetually on the brink of disaster—in an unexpected situation. Rather than being a Rebel spy, he's currently a thief living on the planet Ferrix, in a working-class city of shipbuilders and traders. Diego Luna—always a magical screen presence—strikes a delicate balance between sympathetic vulnerability and the obvious fact that Cassian is a twitchy, dangerous bastard.

Ferrix quickly feels as well-drawn as many of the iconic planets in the Star Wars movies, with a tangible sense of community. And while the urban/shipyard locations are somewhat derivative, they're shot with far more visual flair than we're used to seeing on Disney+. To my great relief, Andor ditches the artificially murky VFX in favor of outdoor locations, textured production design (Chernobyl’s Luke Hull), and a lively palette of costumes (Michael Wilkinson).

Andor has been described by some as a slow-burn, which to me seems like a misnomer. The first three episodes keep the audience on their toes, ramping up an unpredictable cat-and-mouse thriller with witty dialogue and an idiosyncratic supporting cast. This ranges from the kind of minor-but-fascinating background roles we love to see in Star Wars (a guy whose job is to ring a giant bell) to key figures in Cassian's life (an older woman played by the fantastic Fiona Shaw).

Written by Tony Gilroy (Rogue One), Andor’s introduction displays an immediate understanding for Cassian's murky morality and precarious lifestyle, tying into Rogue One’s anti-fascist themes. Reflecting previous depictions of Imperial troops, the villains are a squad of corporate cops led by an ambitious young officer (Kyle Soller) and a veteran who is clearly out for blood (Alex Ferns).

Unlike Stormtroopers—whose incompetence and lack of identity defang their intimidation factor—Andor's cops make a more personal impact. Some are regular Joes with little investment in their job; others are openly eager to engage in police brutality. The show seems conscious of the racial dynamics at play, casting a predominantly-white police force opposite two Latin American leads. (Adria Arjona co-stars as Cassian's friend Bix; a more rewarding role than she's received elsewhere.) “They can't imagine that someone like me would ever get inside their house," Cassian remarks in one scene, explaining how he got away with stealing from the Empire.

Crucially, the cops aren't very impressive on an individual level. They have galaxy-spanning resources and legal power on their side, but they're hamstrung by their own stupidity and selfishness. They're also the butt of some of the funniest jokes in the show, kicking off with a gag about the dweeby commander tailoring his own uniform. The whole point of stories like this is to show how the little guy—or a group of little guys working together—can topple the toughest of empires, one sneaky trick at a time.

Judging by the popularity of Obi-Wan Kenobi and The Mandalorian, Disney+ doesn't have to produce good television to keep Star Wars fans on the hook. These shows thrive on their audience's passion for the franchise, even if the storytelling is threadbare as hell. In that context, Andor feels miraculous.

Tailored to its title character, Andor focuses on gritty situations rife with moral ambiguity and tragic mistakes. That isn't what makes it great, of course; plenty of the best Star Wars stories are goofy and uplifting. But with its cast of distinctive, nuanced characters, Andor delivers a level of complexity that we haven't really seen since The Last Jedi.

One notable detail is the way Andor handles violence. The big action scenes are well-choreographed and unique, but the action isn't just about thrills. At one point, Cassian kills a couple of Imperials, and instead of shrugging them off as forgettable cannon-fodder, we see the terror, pain, and grief that accompany their deaths. We're meant to acknowledge that Cassian Andor is a murderer, contrasting with the way other Star Wars spinoffs gloss over the body count of their heroes. Death and violence have more weight here, and as such, the stakes automatically seem higher.

That's not to say Andor is overly grim, however. Some moments are deceptively hilarious, and with music by the brilliant Nicholas Britell (Moonlight; Succession), these introductory episodes already offer a moving glimpse at Cassian's past—and an enticing look toward his future with the Rebellion.

Ian shows the risks and costs of living on barrier islands