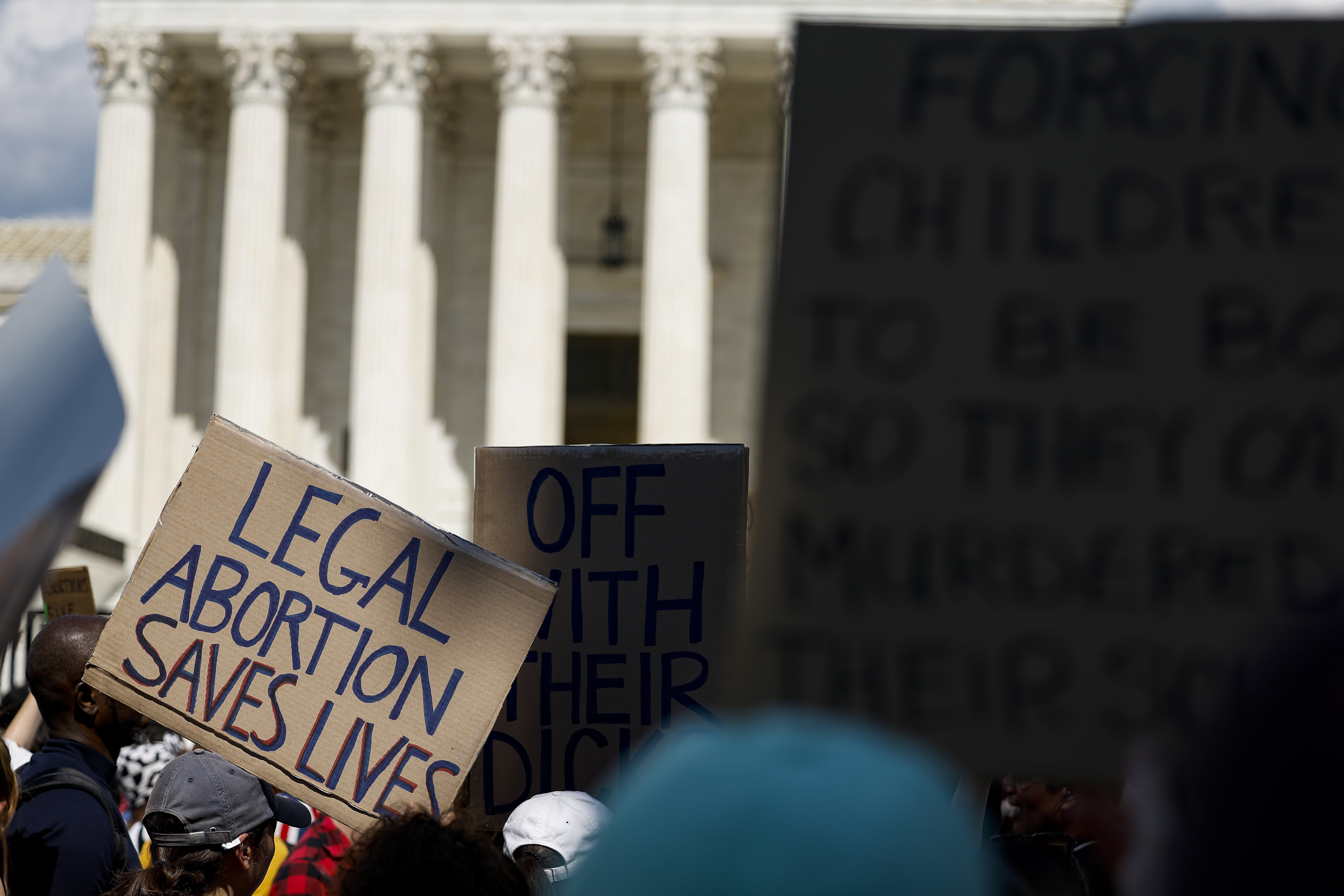 The final sprint of the midterms has brought another battery of ads, with scores of spots set to ominous music and deep-voiced narrators warning about the perils of the opposition.

But deep into an election cycle once assumed to be a lost cause for Democrats, something new is emerging: A wager from a group of progressive operatives that their party’s success comes down to narrative storytelling presented in an animated format.

Wide Angle Research, a nonprofit focused on moving politically-conflicted audiences, isn’t forsaking the hard-hitting tactics that have become a trademark of the campaign season’s close. Instead, the operatives pushed even further with online spots meant to mine some Americans’ darkest fears.

In one of the ads, a 10-year-old girl is sedated in a hospital after being raped. A doctor tells her parents she’ll have to return for a pregnancy test as part of a new government mandate. The narrator in the ad says states are passing abortion bans with no exceptions, adding that “a rapist can force himself on a child. But it takes Republican rule to force her to have his baby.”


In another spot, parents are arrested for child abuse for supporting their transgender child. A third one focuses on violent threats to election workers.

The style and format of the ad campaign, produced with help from the firm 76 Words, is built off of more than 18 months of unorthodox research, including studies that delved deep into the psyche of voters. Operatives at Wide Angle Research believe it represents a new frontier in digital campaigning.

“It’s all in the news now about how Dems are focusing on abortion because they’re realizing it’s a very powerful issue for them. And it is,” said Ineke Mushovic, executive director of Wide Angle Research. “But how does that relate to the fact that election offices are currently fortifying themselves with bulletproof glass because election officials are afraid for their lives? How does that relate to [Texas] Gov. [Greg] Abbott telling child agencies they need to investigate parents who support their trans kids? Dems can make this election about an issue (abortion), or Dems can tie the issues together and make it about something bigger.”

Launched in 2021, Wide Angle Research is not among the best-known Beltway names. Indeed, its website is sparse, Mushovic has spearheaded the project from a cabin in the Colorado mountains. And the group declined to list the names of its funders, save to say that it is supported by several high-net worth individuals who, in Mushovic’s words, “believe it is time to fight back and they hadn’t seen it in the Democratic Party.” But the firm has relationships with other entities in the party’s ecosystem, including Indivisible and UltraViolet; and it partnered with the group Future Majority on its research. That work, while under-the-radar, was praised by operatives in the party tent.

“This research is an attempt to go deeper into the understandings of American voters than most political research can go,” said Simon Rosenberg, a longtime Democratic strategist.

“It’s like adding a third dimension to a two-dimensional image. I find this work compelling, [and] fascinating.”

While the spots portray a dystopian future under Republican control of Congress, the strategists behind them said they’ve gone out of their way to avoid cliched declaratives such as “Republicans are putting our freedom at risk,” which they found were significantly less compelling. Instead, they focused on telling complete stories that weave together a range of issues they’re convinced trigger the strongest emotional intensity.

Those leading the push are hoping the spots will empower Democrats to be far bolder and — in their estimation — more like Republicans when it comes to using issues that elicit visceral responses. They believe the extensive research — thousands of interviews, including dozens of one-on-one sitdowns conducted online with battleground state voters — could also help others across the party as they start to refine their closing pitches for the midterms.

Among the findings of that research is that animation actually works.


Mushovic said with traditional political ads, people would often put up a barrier and, ultimately, it becomes hard to move them. “They would say, ‘That's an actor. That's fake. I don't like that person's voice.’ And that creates this kind of overarching objection,” she said.

“But now, because it's a cartoon format, people didn't throw up that barrier. It's obvious that those aren’t real people. And they allowed their imaginations to be engaged,” Mushovic added. “It let them really start to wrestle with the question of could this be real in the future?”

Format was just one component of the research the group did. It also asked reams of open-ended, envelope-pushing questions. They invited participants to share images and photos of their own to underscore how they were feeling to account for times when words simply are not enough. The reliance on so-called “metaphor elicitation” was specifically designed not only to explore what people think, but why they think and feel the way they do.

Respondents were asked if the Democratic and Republican parties were a touch, feel, or texture, which would they be, and why? Things that came to mind when people thought of Democrats were cotton, suede and hugs. Republicans elicited coarser materials like sandpaper, corduroy, and dollar bills slapping a person across the face, the research showed.

Indeed, a common image that emerged of Democrats was that of a cuddly bunny (Republicans were described as sinister clowns).

Among the other questions asked:

Which party would you rather hold power of attorney over your finances? Fifty-five percent of independents chose Republicans, whom they argued would be more frugal with it.

Which political party would you rather be on a desert island with? Eighty-three percent of independents chose Democrats, contending they would make better company.

And, finally, they asked which party would you rather be in charge during a zombie apocalypse? Among independents, Republicans won this one, too: Sixty percent to Democrats’ 30 percent, with 10 percent choosing a combination of both.

Some of the answers the firm half-anticipated — such as the respondent who said they would hate for Democrats to be in charge during the zombie apocalypse because they would stop to ask the zombies their preferred pronouns. Other responses, though, were less predictable. One white man said if it were merely about surviving the zombie apocalypse, he’d have chosen the Republicans. But as he began thinking about the broader community, he worried they’d leave many of the others behind.

Officials at Wide Angle Research believe these responses provide more significant insights into voter behavior than traditional polling questions, such as which issues they prioritize and how they feel the country is progressing or backsliding.


Gretchen Barton, research director for Future Majority who worked on compiling the studies, said one encouraging result for the group is they believe the findings may have the power to neutralize voters’ real concerns over the economy.

“When we have this strong messaging — what you’re seeing in this campaign — the salience of cost of living dropped and the desire to maintain freedoms and concerns about Republican rule shot to the top,” Barton said, adding it shows such worries “can be top of mind for voters.”

But turning the full slate findings into effective attacks still presented a challenge. Out of more than a dozen different approaches for attacking Republicans tested by the group, most fell flat or altogether failed.

The firms tested the “MAGA-Republican” attack line currently preferred by Democrats, including President Joe Biden, and weren’t impressed by the results. Democrats and voters on the left loved and intuitively understood the term. But the researchers ran into some trouble with independents and moderates, who defined the term far more narrowly, to just a few Republican politicians they considered extreme. That, in turn, caused them to feel like they could still support Republicans for the most part.

Finally, the group found that Republicans felt energized by the “MAGA” term. Some had fond memories of recent presidential campaigns and felt as if the movement had grown beyond Donald Trump. To them, it felt as if they were unfairly being painted as extreme.

In the end, the strategists found that the most effective attack line was among the simplest: that Americans felt they could not trust the GOP with power.

Heading into the campaign homestretch, Wide Angle Research is choosing to make its research available on an open-source basis. Some entities are already taking advantage of it. The group Equality Florida, which advocates for Florida's lesbian, gay, bisexual, transgender and queer community, is set to run adaptations of WAR’s ads on broadcast TV in Florida.

Duke Football Falls To 3-1 At Kansas

From strokes to depression – Dr Jeff answers your health questions