HAVE you ever wondered if a discount store in an affluent area has better items?

YouTuber Laura Lee took a trip to the “richest Ross in the world” to go on a shopping spree and found a designer jacket for $21.99.

Laura’s been to plenty of Ross stores around Los Angeles.

But this time, she was hunting for “the world’s richest one.”

She posted a vlog of her going to the Ross in Beverly Hills, and a haul of all the designer steals she founds.

“Ross is probably one of the most affordable versions of discount department stores. So, we’re going to go there and do some major shopping,” Laura says. 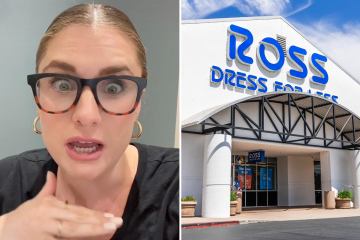 Laura hits the shoe department first, and the racks are pretty “dry.”

From Estee Lauder to Milk Makeup, Laura finds the skincare section to be stock full of high-end brands.

“They actually have quite a big selection of nice skincare products,” she admits.

The purse section consists of Steve Madden and Adidas, but no designer finds.

“Everything else is pretty basic Ross brands and stuff you typically see in here,” Laura says.

However, a hidden rack reveals the store’s designer purse selection.

Most of the bags are Micheal Kors, except one Coach and one DKNY.

“I’m not shocked, nothing I haven’t seen at Ross before,” Laura admits as she walks out of the store.

“That Ross was honestly the worst Ross I’ve been to. There was just stuff everywhere. The shelves were picked over. It was lowkey a wreck.”

Despite the state of the store, Laura says she was still able to find some good stuff.

She starts by showing the $2.99 bottle of Elf Soothing Facial Oil Mist.

What she thought was a $4.99 Stila liquid blush turns out to be a lip product instead.

“Oh my gosh, that is so pretty and pigmented. I love this coral shade,” she proclaims.

Laura shares her favorite item she got, the $14.99 Juicy Couture Malibu fragrance.

“It smells so good. This one is actually nostalgic for me. It smells delish, it’s like sweet and warm at the same time,” Laura explains.

“I think we have a win there.”

Laura reveals the $17.99 mini Adidas cream-colored backpack that she got.

Finally, she shows the $12.99 pair of green cargo pants she found and the $21.99 Baccini leather jacket.

“I did find some wins from miss Ross. It wasn’t a complete failure.”

One expert viewer suggested: “A top tip is to find it when your stores have their delivery days each week and plan trips accordingly. That way you can get the best of what comes in.”

“Heyyy loved the haul. The Bev Hills Ross is pretty good but my favorite Ross is the Brentwood/Santa Monica Ross,” another discount expert commented.

Laura’s taken other trips to the “richest” discount store locations, including Nordstrom Rack and TJ Maxx.