WE’RE all feeling the pinch right now. But a Dacia buggy with NO windows, NO doors and NO touchscreen?

That really is stripping things back to basics.

Other cool features include sleeping bag seat covers and a single pop-out headlamp that doubles as a torch.

Airless tyres mean you’ll never get a flat. There are rear-mounted removable battery packs for anything that needs power.

Plus, the dashboard is made of cork. Cheap and sustainable but it also means you can pin stuff to it. 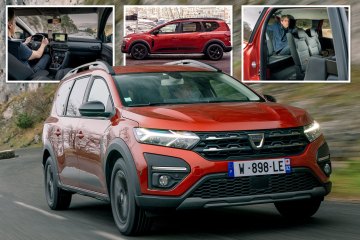 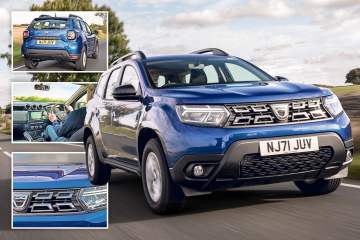 Everything about the £18,000 Dacia Duster is better than before

You are right, of course. This buggy concept is pure fantasy land. Well, most of it.

But it’s a clever way for Dacia to show how it is repositioning itself as an outdoor-loving, adventure-seeking car brand that still happens to be very usefully cheap.

Not so long ago, the only option on a Dacia was a spare wheel – and that was it. I’m not joking.

From next year, you’ll be able to order a double bed conversion kit for the seven-seat Jogger (£1,000).

Inside the world's most beautiful private car collection worth millions

MUG WITH A RUG

Driver branded 'unbelievable' by police for obscuring view with a carpet

It unfolds over the back seats with a mattress on top leaving storage space underneath for all your camping and cooking gubbins.

There’ll also be a Dacia tent (£500) that attaches to the back of the car, for those who wish to explore the green bits of Britain.

Also, every new Dacia from now on will wear the tough new DC logo, and showrooms are gradually being updated with modern, eco-inspired looks with earthy tones.

As for new metal, there’s a radical next-gen Duster coming in 2024 and hopefully the diddy five-door Spring EV too.

The Bigster follows a year later – the brand’s first, as the name suggests, properly big SUV.

Which brings me nicely back to the buggy.

Ten things YOU should know as a car owner

It also has a simple, dash-mounted clasp to hold your smartphone – like the base-level Sandero today.

Download the free Dacia app and you don’t need an expensive built-in touchscreen. Another simple moneysaving idea from the moneysaving experts.

Pet insurance doesn't cover spaying and neutering, but an add-on wellness plan might

Today24.pro
US chess star ‘likely cheated more than 100 times’ – investigation 7 Perfect Pear Recipes from Savory to Sweet A 34-year-old coder quit his $300,000 job at Stripe to build up his after-work project. Here's why he's convinced it was the right thing to do. Zac Efron Was Never The Same After Playing Ted Bundy