SAMANTHA KAYE, 53, had an horrifying experience.

Samantha Kaye, from Worcester, spent 4,500 euros (£3,948) on breast and arm surgery in Turkey but her experience was horrifying[/caption] She reveals ‘The pain continued and I was horrified when I took my bandages off’[/caption] Samantha was ignored and blocked by the Turkish clinic, but thankfully received a payout of £2,000 from her medical insurance[/caption]

She says: “I’d never had massive breasts but was happy with my size B cups, then after losing weight I’d gone down to a pocket of skin.

“I became really self-conscious so I looked into surgery. I also hated my ‘bat wing’ underarms so wanted them tucked.

“It was around £8,000 in the UK but in Turkey it would be half the price. I spent hours scouring the internet for surgeons, researching, reading testimonials and reviews. I didn’t think I was taking a risk.

“I flew over with my husband John and met the surgeon I’d picked. 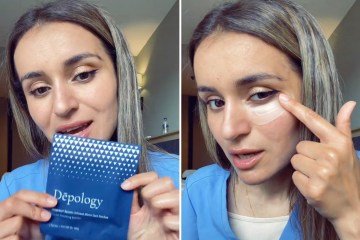 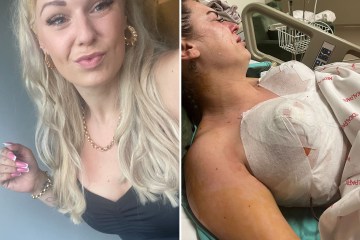 “He seemed professional but when I told him I wanted a C cup, he said that it was too big and he’d make me a B. I was concerned by his manner but felt it was a language barrier.”

Samantha’s package included a stay at the hotel before and after the procedures.

She says: “When I came around after surgery, I was in bed and bandaged up.

“I tried to turn but searing agony hit me. I could barely stand the pain. They were supposed to check my observations all night but no one came.”

Seven days later Samantha boarded a flight back to the UK.

She says: “The pain continued and I was horrified when I took my bandages off.

“I had two implants high up but my nipples and loose skin hung down like udders. They had completely botched the operation.

“I was distraught and refused to leave the house. I called the clinic but they refused to talk to me.

“When I complained about them on social media, they blocked me. I threatened to sue them but no one ever replied.

“Over the next few months my boobs got worse. One breast was up, the other down. I couldn’t believe what I had done.”

Thankfully, Samantha had medical insurance and was given a payout of £2,000. Last month she was able to save enough money to find a surgeon in the UK to fix her breasts, costing £8,500.

She says: “Now I am recovering from surgery. I’ve spent over £12k instead of the ‘saving’ I thought I’d have in Turkey.

“I’d warn any woman against doing what I did.”

With inflation soaring, where are the best grocery deals?