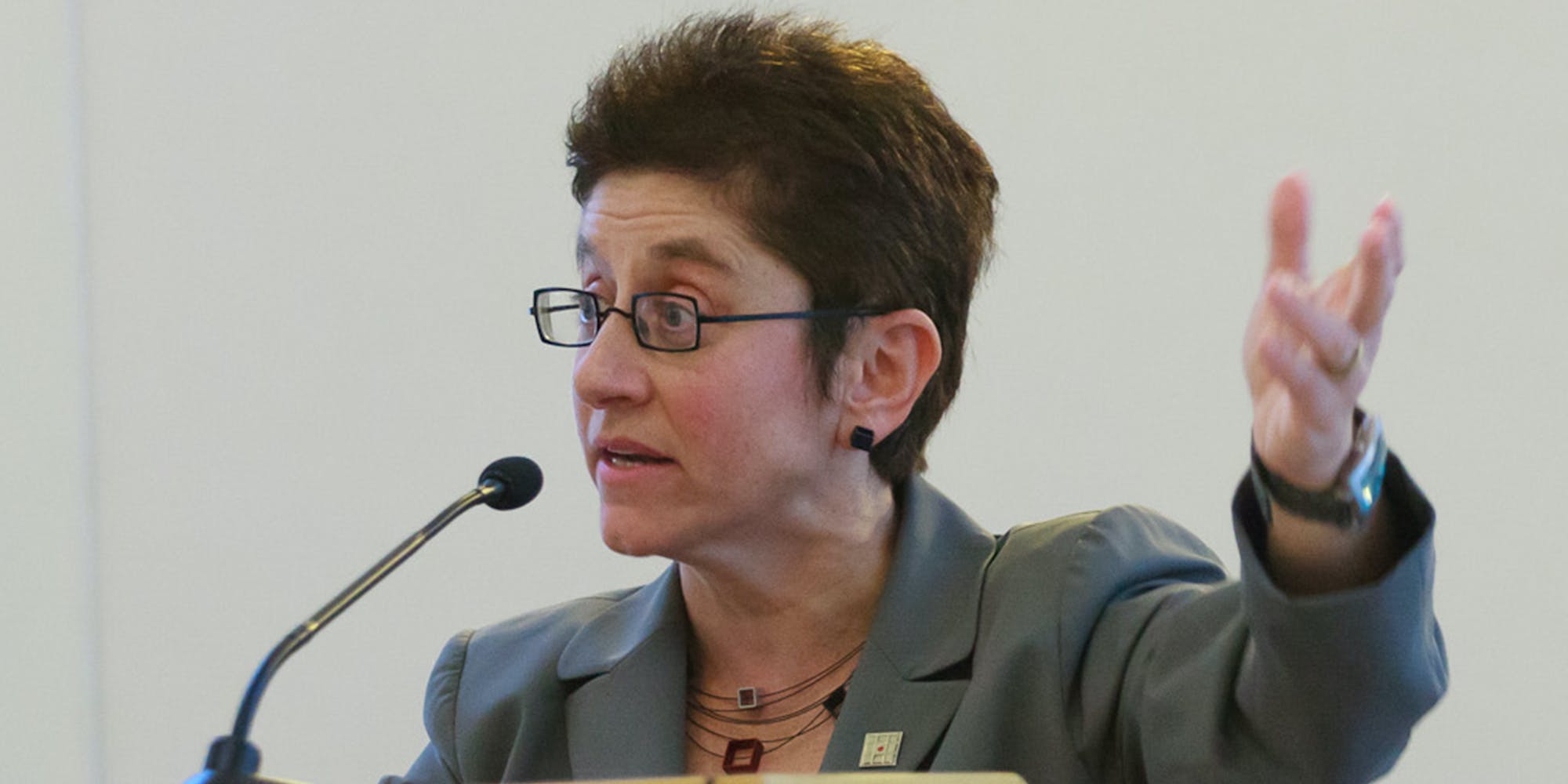 A relentless media smear campaign is helping launder harmful congressional inaction on the Federal Communication Commission (FCC), leaving the nation’s top telecom regulator gridlocked and unable to implement meaningful reform. It's also holding hostage the nomination of a popular reformer with a long history of standing up to U.S. telecom monopolies.

A source close to the process says the Biden administration remains committed to pushing Gigi Sohn to the FCC, giving Democrats a majority on the agency tasked with overseeing America’s internet. Yet the administration has provided little public support for Sohn, leaving her largely alone in a fight against a $1.7 trillion industry dedicated to crushing her candidacy.

After an inexplicable nine-month delay upon taking office, President Joe Biden nominated Sohn to the FCC last October. Sohn, a longstanding consumer champion and former FCC advisor, isn’t inherently controversial. She’s historically popular in telecom circles across both sides of the aisle, with decades of experience in consumer protection and government.

Sources familiar with the nomination process say Sohn’s candidacy remains very much alive, despite the last congressional action on her nomination coming back in March.

The attacks have taken a toll on Sohn politically, leaving the nomination in limbo and the FCC stuck without a voting majority nearly two years into Biden’s term. If Sohn isn’t confirmed by year’s end, her nomination will need renewal under a new Congress, and it remains unclear if the Biden administration has the political backbone to do so.

As it currently stands, Sohn’s confirmation would need the support of all 50 Senate Democrats, thanks to a unified blockade by Republicans. The upcoming midterms, just six weeks away, loom large as to whether this dynamic could be dramatically altered one way or another.

Sohn’s nomination is in sharp contrast to Biden’s lightning fast appointment and subsequent promotion of progressive antitrust reformer Lina Khan at the FTC. Or the Trump administration’s appointment of FCC Commissioner Nathan Simington, whose confirmation took less than a month to finalize despite major concerns about his lack of experience.

Consumer groups say Biden’s nine-month delay in nominating Sohn to the FCC gave politically powerful telecom and media giants and their congressional allies ample runway to launch a litany of unfounded attacks, pushed via a parade of partner organizations.

The Fraternal Order of Police, an AT&T partner, used push polls to falsely claim Sohn is anti-police, resulting in a swell of negative and misleading editorials and press reports.

The attacks have been bipartisan. One Country Project, a Democratic PAC led by former Senator Heidi Heitkamp of North Dakota (herself no stranger to telecom campaign contributions), launched a six-figure marketing campaign over the summer claiming that Sohn would be bad for rural America, allegations consumer groups say are both hollow and baseless.

Rupert Murdoch’s News Corporation is particularly active in the campaign, running a barrage of stories and editorials across its various outlets falsely claiming Sohn is a “nightmare,” hyperpartisan, an enemy of the police, wants to unfairly censor conservatives, opposes free speech, and generally supports “far left” “controversial opinions.”

None of the attacks are grounded in reality.

If Sohn’s nomination doesn’t pass, it’s possible it won’t be renewed in the new year, with consumer advocates believing Sohn might get replaced by a more industry-friendly candidate. Even if Sohn is confirmed, two years of potential policy making will have been lost.

Consumer groups and public officials say the attacks reflect the fears of a heavily consolidated telecom and media industry, afraid that a genuine reformer will reverse many of the widely unpopular policy decisions made during the Trump administration, such as the repeal of net neutrality, or rules designed to prevent corporations from growing too powerful.

“The major ISPs, who have spent decades disinvesting in low-income neighborhoods to boost their profits now have to deal with a federal enforcer tasked with penalizing companies for continuing that practice,” Electronic Frontier Foundation’s Ernesto Falcon told the Daily Dot. “Their only option at this point is to shut down the enforcer, which is why so much dark money is being spent on preventing Gigi Sohn from being confirmed to the FCC.”

Telecom policy experts, lawyers, and consumer advocates are also all quick to point out that Sohn isn’t the type to back down from a fight.

At the same time, neither the administration nor potential FCC colleagues have provided public support for Sohn as the coordinated attacks have accelerated, leaving her effectively on her own to face a relentless character assassination campaign that continues to drag down the nomination’s chance of success.

The White House Press Office defending its handling of Sohn's nomination when asked whether the administration still supported her in the wake of delays and industry attacks.

When provided with examples of consumer group concerns about strategic blunders like the delayed nomination and “dithering” by Democratic strategists, the White House did not respond.

In a statement provided to the Daily Dot, Sen. Ron Wyden (D-Ore.) lambasted the campaign against Sohn and reiterated the importance of having a functioning FCC.

“No single action by this Congress would do more to bridge the digital divide and help consumers than confirming Gigi Sohn and restoring a Democratic majority to the FCC,” Wyden said. “Sohn has a spotless record of working for consumers and standing up to the Big Cable barons. It’s no surprise they’re responsible for the smear campaign that has held up her nomination for months.”

At times Sohn’s nomination process suffered from simple bad luck, such as when a nomination hearing was delayed after Sen. Ben Ray Luján (D-N.M.) suffered a stroke.

At the same time, some consumer groups have been unimpressed with the strategic planning of Sen. Maria Cantwell (D-Wash.), who led the nomination process as Chair of the Senate Commerce, Science, and Transportation Committee. They’ve been equally unimpressed with Sen. Chuck Schumer’s (D-N.Y.) inability to prioritize Sohn or whip the necessary votes.

“Democratic leadership repeatedly said that if Democrats took control of the Senate they would move quickly to get the FCC back to work protecting the public," Fight for the Future Director Evan Greer wrote in a letter to Schumer last February.

"Cantwell, in her role as chair of the Senate Commerce Committee, has been actively and egregiously preventing Democrats from making good on those promises,” Greer added. “She has repeatedly caved to disingenuous opposition from Republicans and industry lobbyists, leading to inexcusable delays in the confirmation of highly qualified FCC nominee Gigi Sohn.”

A Sohn confirmation vote before the midterms doesn’t seem likely. Policy experts say Democrats have three options: a straight vote during the lame duck period; a bundled vote, in which Sohn’s FCC nomination is paired with a popular conservative choice to replace Noa Phillips at the FTC; or a recess appointment.

Public Knowledge Government Affairs Director Greg Guice believes a straight vote by a lame duck Congress might be the most likely option. Senators facing difficult midterms, such as Sen. Mark Kelly (D-Ariz.) and Sen. Catherine Cortez Mastro (D-Nev.) may be more likely to vote for Sohn during a lame duck.

Whatever happens, Guice, Falcon, and Schumer all argue that with billions in new broadband subsidies on the line, getting Sohn approved before the end of the year needs to be a top priority if Washington truly cares about affordable broadband and consumer protection.

“With important decisions on competition, mapping, media ownership, digital discrimination, and other big issues coming before the Commission, she needs to be confirmed so the FCC can do the hard work it must do to protect consumers and promote the public interest,” Guice said.

“So long as FCC Chairwoman Rosenworcel does not have a working majority to carry out the law, the FCC will remain a powerless agency and these companies will keep gaining profits from their discrimination against the poor,” Falcon said.

That could mean an agency without the voting majority to approve the new broadband maps needed to determine where more than $50 billion in new broadband funding is needed. The fate of American broadband, and whether it will be equitably distributed or determined by the whims of big telecom, is hanging on a vote that may never come.

“The Senate and administration need to brush off these bad-faith attacks,” Wyden said of the campaign against Sohn. “Otherwise Comcast, AT&T and the rest of the telecommunications giants will continue to gouge consumers for subpar service, squash competition, and violate Americans’ privacy.”

The Queen ‘gave Meghan a telling off when she ranted at caterer preparing a special vegan wedding menu’, insider claims