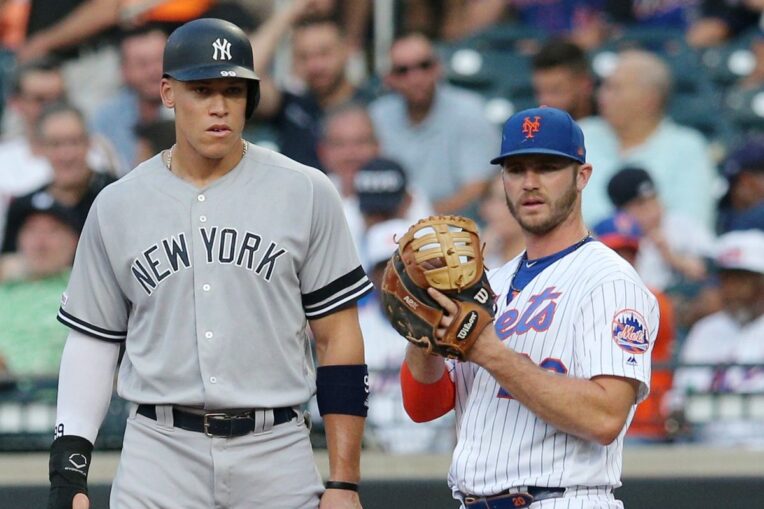 Yankees outfielder Aaron Judge hits his 60th home run of the season against Pirates pitcher Wil Crowe on Tuesday. Judge ties Babe Ruth for the second-most home runs hit in a single season for the franchise and is only one away from tying Roger Maris for the AL all-time single season record.

But alas, the New York team with the better record won on Tuesday as well. After falling behind 4-0, Pete Alonso hit a three-run homer to bring the Mets within one, then Francisco Lindor came through with a grand slam to put the Mets up 7-4. Edwin Díaz shut the door with a five-out save and the Mets came back to defeat Milwaukee 7-5, extending their winning streak to six games. For more on this win, check out our recap!

The Braves won once again as well, so the Mets’ division lead remains at one.

Global News reports that the Canadian government is preparing to end its COVID-19 vaccine mandate at the border. As the Toronto Blue Jays prepare to make the postseason, this means unvaccinated players can travel to and from the Canada/US border. Previously, unvaccinated players had to stay behind while teams went ahead into Toronto.

The Los Angeles Dodgers announce the passing of Maury Wills. Known for reviving base stealing as a strategy, Wills won the NL MVP in 1962 and broke the then single season stolen base record of 94, with 104 that year. He was 89.

David O’Brien of The Athletic reports that Braves pitcher Spencer Strider has left oblique soreness and will miss his next turn in the rotation.

Detroit Tigers shortstop Javier Baez is offering free, hot meals to everyone affected by Hurricane Fiona back in his homeland of Puerto Rico, as reported by TMZ from Baez’s Instagram account.

Rich Sparago reflects on the career of John Stearns.

Sam Klein highlights Ronny Mauricio, Jake Mangum and others on the latest edition of the Mets Minors Weekly Recap.

This Date in Mets History

2001: Ten days after the attacks of September 11, the Mets and Atlanta Braves play the first professional baseball game in New York City. Down 2-1 in the bottom of the eighth and a runner on, Mike Piazza takes Steve Karsay deep to center to put the Mets up 3-2 and in the process, helps the city heal and gives fans a moment they’ll never forget.

Who Will Replace Trevor Noah on 'The Daily Show'? Comedy Central Comments on Search For New Host