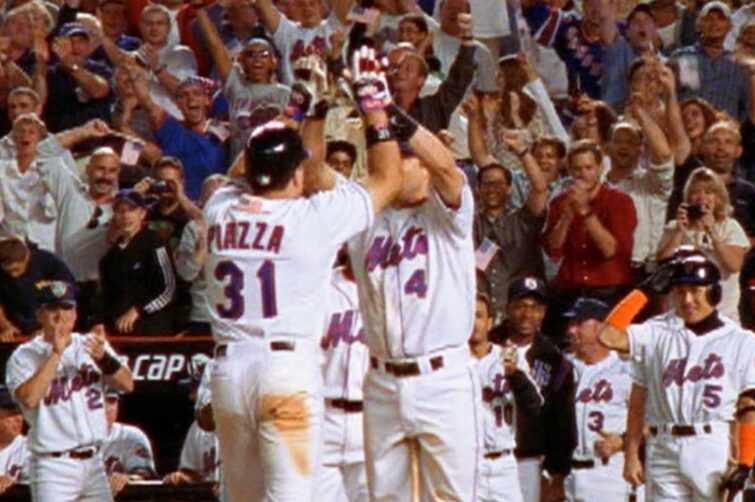 Mike Piazza was the driving force behind consecutive playoff appearances and a National League pennant. He ensured the Mets were an annual contender once he came over from Los Angeles to the Big Apple, hitting 101 homers and 313 RBIs through a little more than two seasons.

However, September 21, 2001 carried an entirely different significance. Piazza lifted the spirits of broken city with his eighth-inning home run in the first professional sports contest held in New York since the terrorist attacks. To Mets fans, baseball fans, and those seeking normalcy in unstable times, it provided a temporary sense of order.

The 41,000-plus in attendance, understandably, weren’t given much reason to cheer for most of the evening. From Diana Ross’ stirring performance of “God Bless America,” to the players exchanging handshakes and hugs before first pitch, to Liza Minelli’s rendition of “New York, New York” during the seventh inning stretch, the emotions felt and expressed by those at Shea Stadium fans were chills, tears, and “USA-USA” chants.

Atlanta held a 2-1 lead in the bottom of the eighth with Piazza due up third. With one out and none on, Edgardo Alfonzo took a borderline pitch for ball four.

It was easy to dream about the series of events that could transpire as the Mets’ power threat stepped up. He had delivered dramatic late-game home runs several times before. But for a storybook ending, Piazza was central casting as the best author for this script.

On 1-1, Piazza hammered the Steve Karsay pitch to deep center. It sailed well over the 410′ mark and into the camera well. As it disappeared into the backdrop, an outpouring of cheers and excitement poured out. These were fans who hadn’t known when the right time was to express happiness over a simple baseball game. But now was the right time.

The Mets took a 3–2 lead—a lead they held through the top of the ninth. New York City, at least on this evening, had something to celebrate.

For all of Piazza’s 427 career home runs—220 of which came as Met—none can match the emotional impact of this one.

Experts are predicting a white Christmas for the UK this year