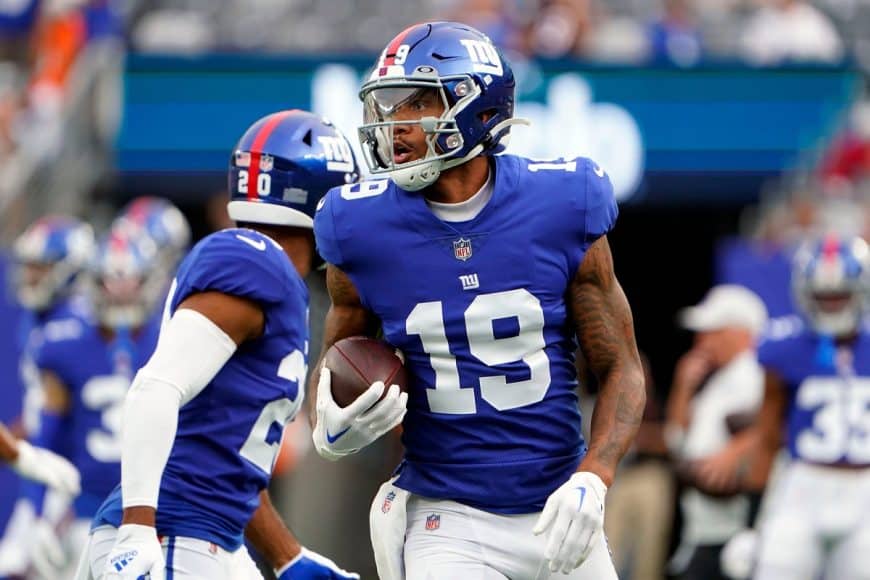 The Chicago Bears couldn’t make any big moves at wide receiver this off-season. Lack of resources played a part in that. Most of the big names were way too expensive to acquire. GM Ryan Poles opted for a quantity over quality approach, securing several younger receivers with physical upside that might be able to help the team. Byron Pringle, Dante Pettis, Equanimeous St. Brown, and Velus Jones Jr. headlined that list. Thus far the results haven’t been encouraging.

Part of that might be Justin Fields struggling to hit them even when they’re open. The truth is that the lack of talent at wide receiver is sometimes evident. Poles isn’t going to overreach for help this year. Not unless he finds an unexpected bargain worth exploring. Sure enough, it looks like one might be unfolding out east. According to Jeremy Fowler of ESPN, the New York Giants are reaching a point of no return with wide receiver Kenny Golladay. He only played two snaps last week and it’s clear the new regime has no plans for him. There is a strong likelihood he won’t finish the season in a Giants uniform.

It’s a matter of finding a favorable exit door.

The Kenny Golladay situation in New York is far from over. When a receiver with a $21.15 million cap hit plays two snaps on Sunday, there’s no coming back from that. This is the classic case of a new regime — GM Joe Schoen, coach Brian Daboll — taking over a contract it wouldn’t have done itself. And when that’s the case, teams look for exit strategies.

The Giants didn’t do anything with Golladay’s contract in the preseason because the guarantees hamstrung them. His $13 million salary and $4.5 million roster bonus are locked in. Zero wiggle room. But a similar situation unfolded in the New York area a few years ago, with the Jets and Le’Veon Bell. GM Joe Douglas, who didn’t do the Bell deal, decided the Jets were better off paying Bell his $13 million in guarantees to go away, first trying to trade him before releasing him.

The difference is Golladay, as an accomplished wide receiver with red zone scoring potential, could have some trade value if the Giants agree to cover most of his salary. Something to watch, because Golladay can’t be satisfied with his role.

Chicago Bears can and should explore Golladay.

The 28-year-old receiver has to feel immense frustration. He had over 1,000 yards and 11 touchdowns in 2019. Many saw him as one of the better receivers in football. Then an injury in 2020 cost him 11 games. He still managed to get his money in free agency last year with the Giants. However, he arrived at a bad time with the current regime already under a ton of heat. Throw in multiple injuries at quarterback, and it led to only 521 yards and zero touchdowns.

It’s obvious he wants out. If not for his contract, the Giants likely would’ve cut him already. No team will trade for that because of the guaranteed money. That means if New York wants him gone, they’ll have to eat most of those guarantees to get a return in any trade. That is where the Chicago Bears come in. They have enough cap space to manage the remainder of that contract. Golladay is still a weapon when given opportunities. If the Giants are willing to accept a Day 3 pick while eating that money, then it’s a worthwhile risk for a passing attack that sorely needs help.

Editorial: Welcome to the club