ARSENAL have reportedly opened talks with the representatives of Eintracht Frankfurt attacking midfielder Jesper Lindstrom over a January transfer.

The Gunners, who sit top of the Premier League table, are expected to be active in the New Year with Mikel Arteta keen to bolster his squad.

Boss Arteta is known to be in the market for a new midfielder having failed to bring in Aston Villa ace Douglas Luiz on deadline day.

And according to Bild, Denmark international Lindstrom is on Arsenal’s radar having starred in Germany.

The 22-year-old was named Bundesliga Rookie of the Year last season after impressing in his opening term at Frankfurt following his move from Brondby.

He has continued his fine form this campaign having chipped in with three goals in ten games in all competitions – including last week’s winner away at Marseille in the Champions League. 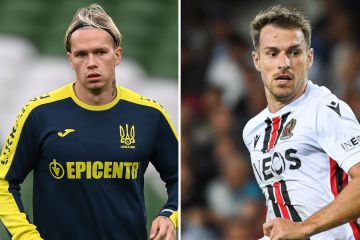 Bild state that Arsenal have contacted Lindstrom’s team over a potential switch to the Emirates in the New Year.

It has been said that the 2022 Europa League winner fits the right profile of player that Arteta is targeting.

Arteta has been keen to bring in versatile players in the last year, and with Lindstrom able to operate in the No 10 role or on the wings, he fits the criteria.

The German news outlet has declared that a fee of £17million would be enough to secure Lindstrom’s services.

Arsenal could return for Manuel Locatelli with Italian struggling at Juventus

Arsenal failed to dip into the market in the last winter transfer window, and it proved costly as they missed out on the top four by two points.

However this time around they may not be so quiet, with Shakhtar Donestk winger Mykhaylo Mudryk believed to be a target.

Meanwhile it remains to be seen whether they will go back in for Brazilian star Luiz, who has entered the final year of his contract at Villa Park.

And Leicester contract rebel Youri Tielemans could be available in a cut-price transfer with the Belgian ace to become a free agent next summer.

Juventus midfielder Manuel Locatelli is also claimed to be attracting interest from the Gunners after they failed to sign the Italian from Sassuolo last year.