A MCDONALD’S fan has shared his genius trick to getting free Monopoly stickers every time he orders.

TikTok user Josh Heslop says he’d mastered a technique that worked every single time so that he can get his hands on even more of the stickers, which lead to prizes including free food and drink.

Josh, whose profile is @Joshheslop_, uploaded a video to his account showcasing the hack in all its glory.

It begins with Josh sitting in his car, as he gets ready to head to the fast food drive through to place his order.

He tells his followers: “Right, the easiest way to get Monopoly stickers, hopefully this works…”

Josh then tells the team what he would like to eat and drink, before heading to the first window to collect his drinks order. 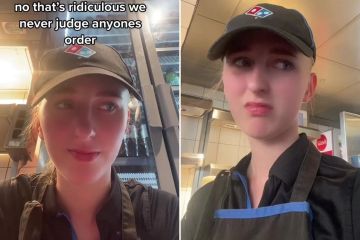 As the server tells him to head to the next window, Josh politely asks: “Could I ask you a quick favour?

“Would I be able to get a large cup with ice please?”

True to his word, the server then hands him the cup, which, of course, includes yet another Monopoly sticker, but this time free of charge.

Driving away with a big smile on his face, Josh concludes: “Easiest way to get McDonald’s Monopoly stickers for free – a large cup of ice.”

Josh’s followers were impressed by his clever tactic and said they would give it a go themselves next time they went to McDonald’s.

Until October 18, customers can collect the stickers that appear on popular products like fries and burgers.

To be in with a chance of winning big, all fast food lovers have to do is peel off the stickers on the side of their food packaging and see what they’ve won.