NATE DIAZ has sensationally called out Dwayne “The Rock” Johnson as the “only” fight he will take after leaving the UFC.

Diaz, 37, has walked out on the UFC following the final bout in his contract, which he won against Tony Ferguson, 38.

The American has teased a boxing switch and even launched his own fight promotion.

But it appears WWE legend Johnson, 50, is the only man on Diaz’s radar.

He tweeted: “I’m only going to fight the rock Otherwise I’m good.”

Diaz’s feud with The Rock dates back to his 2019 fight with Jorge Masvidal, 37, which was to determine the UFC’s “Baddest Mother F***er”. 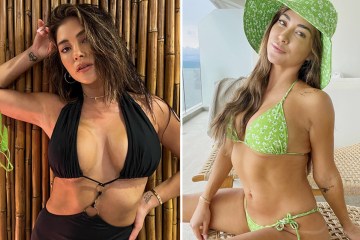 The Rock put the BMF belt on Masvidal after the third-round stoppage win.

But Diaz took exception to it, believing his rival was being favoured while arguing Mike Tyson, 56, should have been the man in the middle.

He said: “F** The Rock too man, that motherf***er over here playing me.

“See him over there smiling with Masvidal. Should have had Mike Tyson handing out a belt if anybody.

HOW TO GET FREE BETS ON HORSE RACING

“You guys caught me at a bad time. The Rock’s cool, I like Ballers, but he picked the wrong side so he can get his ass whooped too.

“With all due respect, he can get it too.”

The Rock responded: “I wasn’t surprised at Nate’s comments because that’s the Nate we all know and love.

“He is as advertised. He gets it. He knows that me and Jorge are boys.

“There’s a connection so I was totally fine with it, he gets it.”

Today24.pro
How to Get MICROSOFT OFFICE for FREE in 2022! How to invest in communications stocks, a sector that's huge, highly diversified, and growing — offering something for almost every type of investor Trump Claims He Declassified Documents Using Special Powers! Sweet Potato Souffl