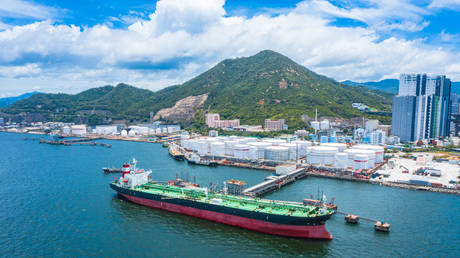 Chinese energy imports from Russia have continued to grow, with the nation spending a record $8.3 billion last month, Bloomberg reported on Tuesday, citing customs data. The spending on energy in August made up 83% of China’s total imports from Russia.

According to the report, Beijing has expanded its reliance on Moscow for overseas supplies of crude oil, petroleum products, natural gas and coal.

The haul for August was reportedly 68% higher than a year ago and included a record amount of coal. It brought the total over a period of six months to nearly $44 billion, an increase of 74%.

Statistics showed that Russian oil exports to China grew to 8.34 million tons last month, from 7.15 million tons in July and 6.53 million tons a year ago. Imports of Russian coal by Beijing hit a new high of 8.5 million tons, up 57% on the year, with coking coal for the steel industry totaling 1.9 million tons. Purchases of liquefied natural gas (LNG) amounted to 671,000 tons, the most since 2020 and a 37% increase year-on-year.

The report noted that the volumes exclude imports via pipelines, which are the main channel to transport Russian fuel to China. The customs service hasn’t reported on those supplies since the start of the year.

“Russia is likely to ship more crude and products to destinations including China in the coming months as Europe tightens sanctions,” Bloomberg wrote, noting that some of those supplies come at discounted rates.

Today24.pro
Trump Claims He Declassified Documents Using Special Powers! Sweet Potato Souffl These Are The 11 Best Weapons Wielded By A Predator How to Get MICROSOFT OFFICE for FREE in 2022!