A SIZE 12 fashion lover has vowed to never shop at House of CB after a hilarious fail.

With millions of products and edited photos, shopping online can be a bit like gambling – you never really know what’s going to arrive at your doorstep.

And nobody knows it it better than Raeann Langas, a plus size curve model and fashion blogger, who regularly shares trendy outfit ideas and styling hacks on social media.

Unfortunately for Raeann, who is a size 12, shopping on the popular site, House of CB, ended up in a disaster.

”If I ever try and order anything from House of CB ever again, just stop me,” she begged in a video on TikTok.

”I always order and it never fits. 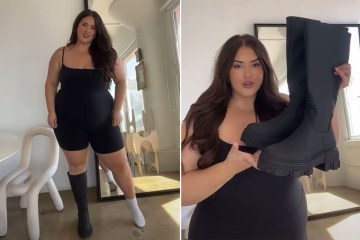 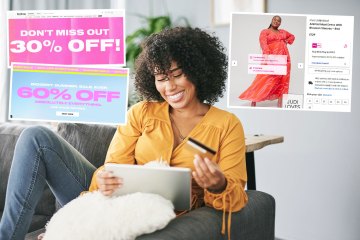 According to the plus size fashionista, she had ordered a cute little number – a slinky dress with a cute lace bra detailing in Large+.

In the viral clip, she claimed that the website had stated that the garment should fit for those who have DD size boobs – but upon trying on the piece of clothing, she very quickly learnt that was not really the case.

The shocked women then demonstrated just how ill-fitting the dress was, leaving many people stunned.

The white lace bra section was well above Raeann’s chest, with her larger boobs hanging below where they were meant to sit.

”What?!” the mortified shopper couldn’t get over the total flop.

Unhappy with how badly the haul had gone, the model also made sure to tag the company in her video.

”My toxic trait is thinking that @houseofcb will actually fit me LOL,” Raeann wrote in the caption.

With a whopping 1.8million views, the clip has taken the internet by storm and has seen multiple fellow curvy fashionistas sharing similar experiences with the brand.

”I’m a 34DD. Bought the bigger bust top which is for “D to E” and everything was out,” revealed one person.

”No way anyone more than a B would fit. Shocking.”

A second penned: ”@houseofcb GIRL WE HAVE BEEN TELLING YOU. WHEN WILL YOU UP THE SIZES GRL [girl].”

”Pls [please] I gave up on them ages ago, their sizes are never consistent it’s confusing,” another added.