FLOYD MAYWEATHER has CONFIRMED he is in talks fight Conor McGregor again.

The American legend officially hung up his gloves in 2017 after beating McGregor in ten rounds in Las Vegas.

Conor McGregor was beaten by Floyd Mayweather in 2017[/caption]

Since then, Mayweather has had three exhibition bouts, not officially sanctioned or affecting his historic 50-0 record.

SunSport revealed talks for a blockbuster rematch with McGregor and how the rivals were negotiating the terms of a deal.

The amount of rounds and whether the fight would be an exhibition or not were among the sticking points in the potentially billion dollar deal.

And in an interview with the Daily Mail, Mayweather confirmed ongoing discussions with McGregor for a sequel next year. 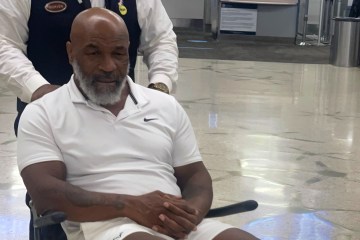 He said: “I want to go out there this weekend and have fun.

“Then I have another exhibition Dubai in November and me and Conor McGregor in 2023.

“We don’t know if it’s going to be an exhibition of a real fight. But there’s been talks of both. I would prefer an exhibition.”

Mayweather, 45, returns over the weekend in Japan against MMA star Mikuru Asakura, 29, in a three-round exhibition.

And then in just two months time he heads back to the Middle East amid talks to face YouTubr Deji, brother to KSI.

Mayweather aimed a dig at McGregor and the Irishman’s punch power when explaining he decision to box in exhibitions.

He said: “I am not into fights where I am going to take any real punishment.

Mayweather first returned in December 2018, beating featherweight kickboxer Tenshin Nasukawa, 24, in one round.

He then faced YouTuber Logan Paul, 27, in June 2021 and was surprisingly taken the distance.

Mayweather’s most recent bout came against ex-sparring partner Don Moore, which he dominated over eight rounds.

Talk of a rematch with McGregor has persisted ever since the pair sold 4.3MILLION pay-per-views and generated over £500m.

Although the Dubliner is yet to box again, despite failed talks with Manny Pacquiao, 43, in early 2021.

McGregor was allowed by the UFC to go out of his contract to face Mayweather.

The MMA organisation received a cut of the earnings and would need to grant the same permission again.

But UFC president Dana White recently spoke out against the rematch, seemingly making his stance clear.

White told GQ: “McGregor-Mayweather 2 is not supposed to happen. Should not happen. Hopefully won’t happen.”