SIR LEWIS HAMILTON has enjoyed some well-deserved time away from Formula One with his family this week.

The seven-time world champion gushed over his niece and nephew as he picked them up from school on Tuesday.

He took to Instagram to share some adorable pictures of the two youngsters after spending the afternoon with them.

The caption of the post read: “Picked my niece and nephew up from school, hugged them tight, watched Buzz Lightyear.

“Best days. So proud of them.”

Hamilton was knighted by King Charles III last year, meaning he is now officially a Sir. 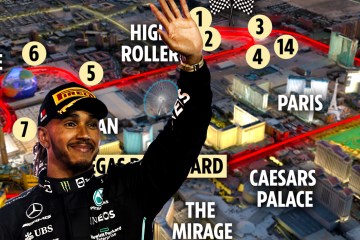 But, he recently revealed that his niece and nephew are the only members of his family who refer to him by his title.

When speaking on Good Morning America in May, he said: “I don’t make anybody call me, Sir. My niece and nephew call me ‘Sir Uncle’.

“It’s a huge privilege in the UK. But I don’t really notice it too often.”

Hamilton regularly spends time with his family when he’s not competing on track.

What do F1 tyre colours mean and how much do they cost?

He is set to travel to southeast Asia this week for the Singapore Grand Prix.

The Mercedes man is still pushing to secure his first win of the season after a disastrous start.

He came close in Zandvoort two weeks ago, but he slipped out of the podium positions with just a few laps of the race remaining.

And he recently admitted that he fears Mercedes will not be able to top the podium this season.

Hamilton said: “We have to be realistic. That Red Bull is almost unbeatable. It’s going to take some real doing to beat that car.

“Performance-wise we have not caught them, and we don’t have upgrades coming to enable us to overtake them. So it’s going to take some fortune going our way to win.

“It’s not impossible, because we could have beaten them in Budapest.

“But Max [Verstappen] is generally chilled at the front, so you can never tell their true pace.”