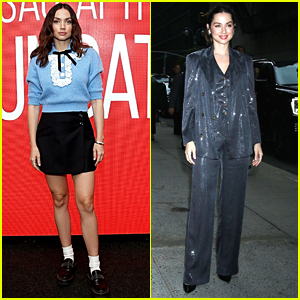 Just the night before, Ana was seen out in a dazzling three piece suit for her appearance on The Late Show with Stephen Colbert.

While on the show, Ana opened up about taking on the role as Marilyn Monroe.

“I didn’t expect to have so much in common with her, and it was actually a lot more than I thought,” Ana shared of her connection with Marilyn. “Just this opportunity alone is almost close to a miracle.”

She added, “A role like this was not supposed to come my way. It was not supposed to happen. Not just because I’m Latina and Cuban…it just doesn’t exist in general. This is something very, very special, and the opportunity for me to play this part was a dream.”

Watch her full interview below!

Just recently, Ana opened up about asking Marilyn for permission to play her in the film. See what she did…