Christians, Buddhists, and Muslims—all from different ethnic backgrounds—are coming together to resist the violent military junta. 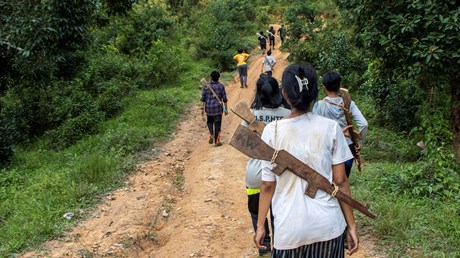 For the first time since anyone can remember, members of Myanmar’s majority Bamar people are seeking long-term solidarity with the country’s ethnic minorities. Since a coup in February 2021 stunned the world, the military, known as the Tatmadaw, has violently cracked down on both the Bamar and ethnic minority citizens protesting its takeover. Its tactics have included burning down entire villages and firing heavy artillery against its own people. So far, more than 2,000 people have been killed in its countrywide civil war with the poorly armed People’s Defense Force (PDF).

Christian NGO Free Burma Rangers (FBR), which has trained 6,000 ethnic minorities as first responders in the past two decades, has observed this growing unity up close. Increasingly, young Bamar people from cities like Yangon and Mandalay have left their college studies and careers to help the growing popular resistance. Some have gone to the jungles to learn from ethnic armed groups how to fight the Tatmadaw. Others have joined FBR trainings, where trainees alternate between intense physical training and learning how to dress a gun wound or navigate dense jungle terrain.

Even as Myanmar faces its worst fighting in its 70 years as a free nation, many point to the unprecedented unity across ethnic and religious divides. While the country’s Buddhist nationalist leaders previously declared that Myanmar belonged solely to the Buddhist Bamar, now people of all backgrounds have banded together against the common enemy of the military junta.

“This has never happened in Burma, never in my 29 years here,” said Dave Eubank of FBR. “What you have is hope.”

“You are not authentic Burmese”

Shifting Autocracy: Why And How The Russian Regime Is Turning Into A Tyrannical Dictatorship – Analysis