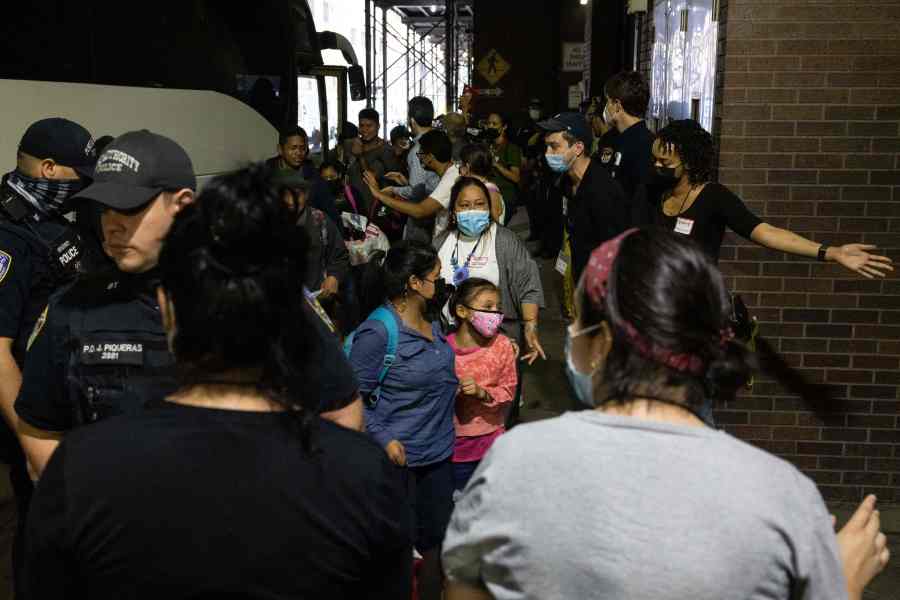 BAY RIDGE, Brooklyn (PIX11) — The stream of migrants from the southern U.S. border continues to flow into New York, and while Mayor Eric Adams has said that he wants for them to keep coming to find asylum in New York City, he said on Tuesday that their numbers have jumped. He also called for more federal and state assistance to help meet their needs.

Also, the leader of one of the community-based organizations, or CBOs, dealing with the migrant influx firsthand said that the city could be doing more to help local charities like his assist asylum seekers.

The needs that migrants who’ve been abused by border state governors to New York have are basic and vital, according to Rev. Juan Carlos Ruiz. He’s the pastor of Good Shepherd Lutheran Church in Bay Ridge, where about 50 migrants have temporary shelter.

“Food, clothing, a space as a respite,” Rev. Ruiz said the people he serves a need and receive at his church and annex on Fourth Avenue here.

Those services aren’t cheap, as an analysis from the Mayor’s Management Report and Bloomberg News points out.

It concluded that the city spends about $136 per day providing for individuals in its shelter system and about $186 per day for families. In addition, approximately 10,000 asylum seekers have been sheltered by the city, which translates into about $1.6 million per day being spent by the city government.

Rev. Ruiz, however, said that funding like that needs to be increased, especially for CBOs, like his church, which provide services.

“We do need the resources that the city has amassed for this population.”

On Tuesday, Mayor Adams said that the number of migrants that have come to the city has spiked from around 11,000 just days before.

The Mayor's Office of Immigrant Affairs has coordinated with CBOs to ensure that city resources reach the migrants being served, according to Rev. Ruiz. However, he added, more financial help would be welcome.

“We cannot do this alone,” he said in an interview from the annex next to his church sanctuary, where cots are set up every night to house the migrants sheltered there safely.

For his part, Mayor Adams said at his news conference that the city is meeting migrants' needs but added, “We do need help. We need the federal government, the state government, to play a role.”

The city has awarded $6.75 million to COBs to assist migrants’ needs.

“Since we began seeing this unexpected increase in asylum-seekers entering shelter, dedicated city employees have worked around the clock to provide shelter, services and support, including opening a dedicated navigation center for arriving families to over 13,000 individuals. We’re grateful to everyone, including CBO partners, who have stepped up to serve. We know that we can’t do this work alone, which is why we’re also working with our federal and state partners to get more resources so we can continue to provide asylum seekers and everyone experiencing homelessness with quality shelter, and appropriate services.”

How bureaucrats are enforcing their right to 'no'

Today24.pro
How to invest in communications stocks, a sector that's huge, highly diversified, and growing — offering something for almost every type of investor Trump Claims He Declassified Documents Using Special Powers! Sweet Potato Souffl How to Get MICROSOFT OFFICE for FREE in 2022!