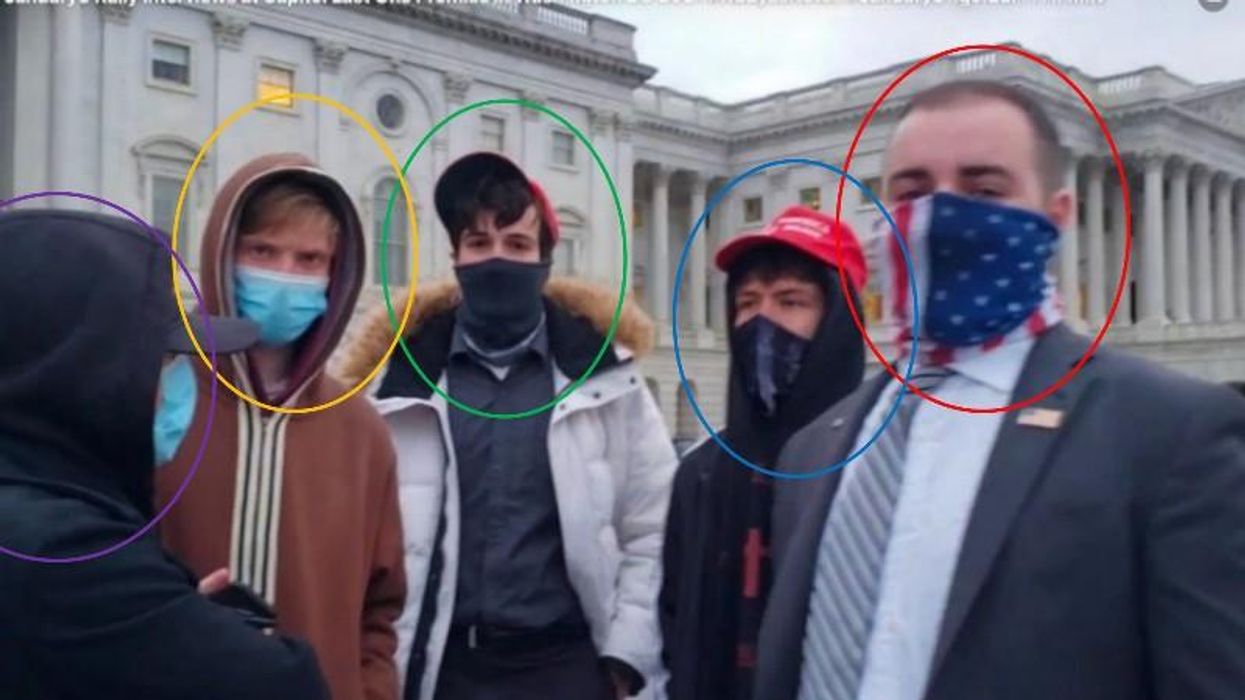 Five men associated with the far-right "America First" movement have been charged for their alleged roles in the Jan. 6 attack on the U.S. Capitol.

"Joseph Brody, 23, of Springfield, Virginia, is charged in a criminal complaint with assaulting, resisting, or impeding law enforcement officers, causing bodily injury, interfering with a law enforcement officer during a civil disorder, and obstruction of an official proceeding, all felony offenses. He also is charged with two misdemeanor offenses," the Department of Justice announced. "Four other defendants also face misdemeanor charges. They include Thomas Carey, 21, of Pittsburgh, Pennsylvania; Gabriel Chase, 22, of Gainesville, Florida; Jon Lizak, 21, of Cold Spring Harbor, New York, and Paul Ewald Lovley, 23, of Halethorpe, Maryland."

All five men have been arrested in recent days, DOJ says.

"According to court documents, all five defendants communicated with one another in advance of Jan. 6, 2021, and eventually illegally entered the Capitol as a group, at approximately 2:16 p.m. They moved throughout multiple levels, corridors, and rooms of the building, including the office and conference room of House Speaker Nancy Pelosi," DOJ announced. "After about 35 minutes, the group exited the building and moved to the north end of the Capitol, witnessing the breach of the North Door. Brody assisted another person in the mob in using a metal barricade against a U.S. Capitol Police officer, knocking the officers back as he attempted to secure the North Door. Brody and Chase also participated in the destruction of media equipment."

In a 45-page statement of fact, DOJ said, "Additionally, the investigation has shown that Lovely, Brody, Chase, Lizak, and Carey were associated with a group known as America First."

"Leadership of America First has espoused a belief that they are defending against the demographic and cultural changes in America. Lovely, Brody, Chase, and Lizak initially met at an America First event and attended subsequent events together," DOJ argued. "After meeting, they continued to communicate through a social media platform. Carey traveled with Lovely, Chase, and Lizak and met Brody in Washington, D.C. on January 6, 2021."

Devotees of Fuentes' America First refer to themselves as "Groypers."

The Southern Poverty Law Center (SPLC), which monitors hate groups, described America First founder Nick Fuentes as a "white nationalist livestreamer who advocates pulling the Republican Party further to the extreme far-right end of the political spectrum. An outspoken admirer of fascists such as Mussolini, Fuentes emerged as an influential figure on the national stage during the now-infamous 'Stop the Steal' movement, which relied on misinformation to falsely claim that Donald Trump had won the 2020 election and sought to overturn the results of it."

The case is being prosecuted by the U.S. Attorney’s Office for the District of Columbia and the Department of Justice National Security Division’s Counterterrorism Section.

ALSO IN THE NEWS: ‘There will be violence’: John Dean predicts Trump will attempt ‘dictators’ play’ as the walls close in