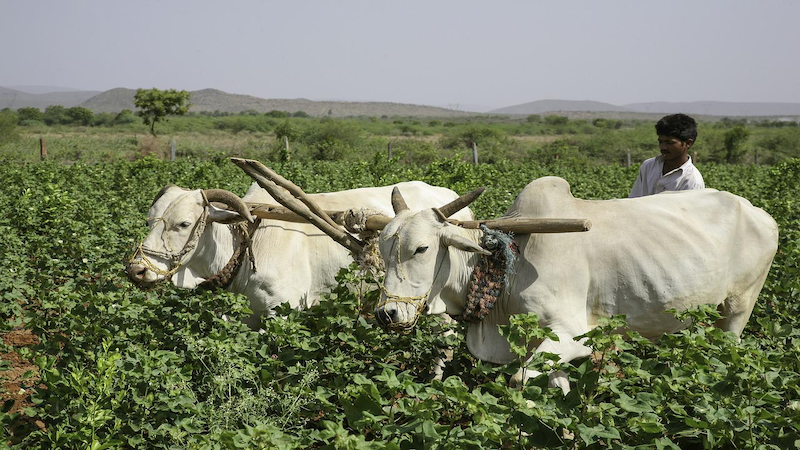 In 1947, India was a food-deficient country, and food security was one of the main concerns of politicians and policymakers. However, from an era of severe food shortage and dependence on the United States, India has transformed itself into a selfsufficient country in food grains, has a sizable public distribution system and is a significant agricultural exporter. Notwithstanding the success, food security is likely to be a critical challenge in the coming decades as the climate crisis impacts agriculture severely. As a developing country with a large and growing population primarily dependent on small-scale agriculture or informal activities, low agricultural productivity, and a highly weather-dependent agricultural system, India is vulnerable to the impacts of the climate crisis. Moreover, undernutrition continues to be a big challenge as nearly 16.3% of the population is undernourished, and about 32.1% of children below five are underweight.

The decline in this year’s wheat output due to the heatwave in March (and similar fears of a dip in rice output) should ring alarm bells because such extreme weather conditions will become more frequent. The climate crisis has caused significant changes in the inter-annual and intra-seasonal variability of monsoon rainfall, and India’s water resources are strained. Several studies indicate wheat and rice are sensitive to the climate crisis. According to a study by AS Daloz and others, wheat yield losses due to the climate crisis will be between 4% and 36% in Punjab, Haryana, Uttar Pradesh, and Bihar. Water shortage and thermal stress are also likely to significantly impact rice productivity.

The climate crisis will also affect access to food and absorption of food. Given that agriculture continues to employ the bulk of the population, adverse impacts on agriculture will affect farm incomes and the ability of farmers and farm-dependent persons to access food. Landless labourers dependent on farm wages will be the worst affected. The climate crisis will also affect urban India’s food security. Again, the urban poor, who live in informal settlements, will be worst affected. Populous cities are highly vulnerable to the climate crisis. The poor, who live in informal settlements in low-lying areas, will experience frequent flooding and loss of livelihood and income. Since the poor spend the bulk of their earnings on food, loss of income due to extreme events will negatively affect nutrition.

The climate crisis will also affect food utilisation in two ways — loss of nutrients in food and adverse impacts on human health. Rising carbon dioxide levels will reduce zinc, iron, and protein levels in crucial crops such as wheat, rice, soybeans, maize, and peas. Decreased iron levels in food will be detrimental to female and child nutrition as more than half of India’s female population is already anaemic.

Studies also indicate that the climate crisis will increase the incidence of diarrhoea in children, and more people will be exposed to vector-borne diseases such as malaria, chikungunya, and dengue. The higher incidence of these diseases will affect food utilisation through a reduction in appetite and reduced ability of the body to absorb nutrients.

Substantial efforts must be made to climate-proof agriculture. Most farmers are poor, debt-ridden, and lack access to technology and finance. Agriculture is also going through a silent crisis, and rural unrest is high. As a result, the adaptive capacity of farmers is low. Thus, the government needs to increase public spending on agriculture adaptation measures. Public investment in agricultural research, irrigation, extension services, and climate-smart agricultural practices should be increased. Given that the climate crisis will adversely affect the ability of the poor to access food through income losses, livelihood security provided by safety nets such as the Mahatma Gandhi National Rural Employment Guarantee Scheme (MGNREGS) will become even more critical. In addition to the welfare-enhancing measures of the scheme, it is time to exploit the adaptation opportunities that MGNREGS presents. All projects under MGNREGS must contribute to improvement in agricultural productivity and create productive assets in rural India.

Food self-sufficiency has been India’s greatest achievement, which must be celebrated. But India urgently needs to wake up to the significant challenges that climate change poses to its long-term food security and adopt urgent measures.

Today24.pro
How to invest in communications stocks, a sector that's huge, highly diversified, and growing — offering something for almost every type of investor How to Get MICROSOFT OFFICE for FREE in 2022! The 31 most stunning photos across women's sports from the last month — Tennis, European Championships, and more Sweet Potato Souffl