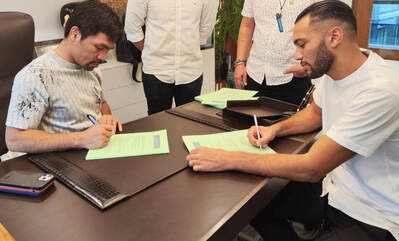 The 43-year-old Pacquiao will battle French superstar Jaber Zayani in a ring konfrontasi that was formally signed early last week at the former senator’s house in Makati City.

“I personally negotiated with the senator together with my team and after months of talks, we finally agreed to a face off next year. He already signed the contract so it is a go,” said Zayani who was accompanied by Filipino business manager Nico Rojas.

Zayani said Pacquiao, through the help of Luis “Chavit” Singson, agreed to non-sanctioned 8-round bout using the regular 8-ounce gloves that is tentatively set mid-February at the King Fahd Stadium in Riyadh.

“Call it an exhibition or something but when the senator signed the deal, I told him to prepare well because I’m going to give him a real fight. He then told me, ‘you better be prepared’,” disclosed Zayani.

A native of Saint-Martin-d'Hères, Isère, France, the 31-year-old Zayani once served as Pacquiao’s sparmate when the Filipino boxing icon trained for his 12-round world welterweight bout opposite Keith Thurman in July 2019.

Zayani, who signed a five-year multi-million promotional deal with Saudi Prince Al-Walid Ben Talal, is an unbeaten lightweight contender with a record of 18-0, 11 knockouts. Talal has assigned Abdullah Al Murad, through their entity Elite Sports Athletes (ESA), to be at the forefront of the momentous event.

“I was honest with the senator that I’m looking at this as my biggest break which I will surely maximize. I aim to create a buzz and become a household name. Sure, the organizers are calling this an exhibition but for me, it’s a chance to exhibit my talent as a future world champion,”added Zayani.

While on the campaign trail for the Philippine presidency late last year which he eventually lost, Pacquiao announced his retirement from boxing, one month after bowing to Cuban Yordenis Ugas last August 2021 in Las Vegas.

Just last month, Pacquiao signed up for a six-round exhibition match against Korean youtuber DK Yoo which is scheduled to happen on December 10 in Seoul, South Korea. Pacquiao then agreed to take on Zayani when the deal was presented to him by his longtime trainer Nonoy Neri.

“That’s going to be a December Samgyup party for the senator but once he meets me inside the right, he’s going to get French toasted,” said the Frenchman.

Portugal coach Fernando Santos: “The best is yet to come”

Kansas State leads No. 6 Oklahoma the whole way in 41-34 win

Today24.pro
Sweet Potato Souffl The 31 most stunning photos across women's sports from the last month — Tennis, European Championships, and more Trump Claims He Declassified Documents Using Special Powers! How to Get MICROSOFT OFFICE for FREE in 2022!