THE Queen’s and Prince Philip’s names have been carved into a ledger stone in the Windsor chapel where they are buried.

The stone bears the names of her parents who are also interred there.

The stone used to read George VI 1895-1952, then below that Elizabeth 1900-2002[/caption] The Queen’s and Prince Philip’s names have been carved into the above ledger stone in the chapel where they are buried[/caption]

All four of the royals were members of the Order of the Garter. 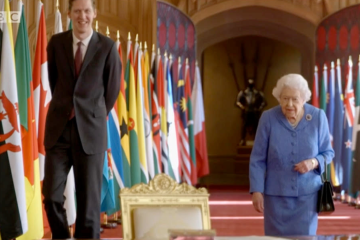 The public can see it when Windsor Castle reopens from September 29.

The Duke of Edinburgh‘s coffin had been interred for the past 17 months in Windsor’s Royal Vault, where it rested waiting for his wife to join him.

They were moved on Monday to King George VI’s chapel, where Charles led his family at the private burial service at 7.30pm.

The ashes of the Queen’s sister Princess Margaret are also in the tomb.

Senior palace sources said the burial was “entirely private, given it is a deeply personal family occasion”.

Another source admitted: “There were tears.” It is not known if the family held a wake or dinner together.

Today24.pro
The 31 most stunning photos across women's sports from the last month — Tennis, European Championships, and more How to Get MICROSOFT OFFICE for FREE in 2022! Trump Claims He Declassified Documents Using Special Powers! How to invest in communications stocks, a sector that's huge, highly diversified, and growing — offering something for almost every type of investor