SKY SPORTS’ coverage has taken the Premier League into orbit over the past 30 years — and nobody has been closer to the action than the channel’s chief football interviewer, GEOFF SHREEVES.

In his new book, Cheers, Geoff! Tales from the Touchline, he reveals some of the secrets of the inner sanctum, starting with the biggest beast of all, Sir Alex Ferguson — the man he nearly blinded.

I’M WRESTLING with this magnum of bubbly, with “Champions” emblazoned on it.

Three seconds before we go live, the cork flies out like an Exocet missile straight at Fergie, missing his right eye by millimetres.

The first words our studio and audience hear is, “Christ, Geoff, you could have taken my eye out!”

Fergie was certainly no stranger to whispering in my ear, telling me to ask about a certain player or situation he wanted to highlight. 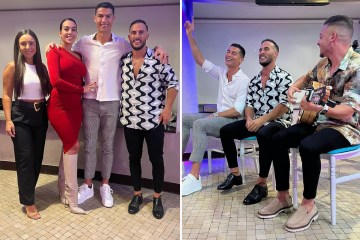 He loved the cut and thrust and used interviews for a message to his players, the fans or even the Manchester United board.

But he also stood up for his players, as I discovered after an FA Cup win over Middlesbrough when Cristiano Ronaldo went tumbling to win a penalty.

I asked Cristiano whether he went down easily. Ronaldo is pretty non-committal but says it was a penalty.

I certainly wasn’t aware of the impending explosion.

Sir Alex comes out of the dressing room and stalks straight towards me.

“The boy hardly speaks English, you’re f***ing bang out of order”, plus even more colourful language.

He launched himself at me physically, with only United’s head of communications, Di Law, who jumped between us, preventing a full confrontation.

“Don’t even think about it,” I said to Fergie, which was met with an immediate, “F*** off, you’re barred,” as he was hurried away from the scene.

I thought I’d done a decent job but as soon as I got home, I stuck the tape on.

Then I saw I had got it wrong. It was heavy-handed, piling into him, demanding to know if he was a cheat.

I wrote Fergie an email, admitting I’d got it wrong. No response.

Our next game was a Champions League match with United in Rome.

In the tunnel he appeared out of nowhere and goes, “Right, you ready for that interview?”

I replied, “Look, I meant what I said in my email.”

He said: “Listen, you don’t need to say anything else, you apologised. It will never be spoken of again.”

People might feel I sold myself short but my job was to work with Fergie, not against him.

Funnily enough, Cristiano was at the centre of another of my Fergie showdowns.

United were in Lisbon for a Champions League game against Sporting. Ronaldo is the obvious interview.

Halfway through I hear a noise behind me. I can see Ronaldo’s body tense up and his demeanour visibly changes. That can only mean one thing — Sir Alex.

I can feel him on my shoulder. I rattle through a few questions and end it earlier than planned.

Fergie couldn’t actually apologise but was trying his best to make up for his mistake.

The next day, I was on the sideline. Fergie slowly wanders over to me and said, “Do you want the team?” Of course I want it.

He gives it to me then Di Law comes over, a big grin on her face.

“Did he give you the team?” she asked. “He’d forgotten to change his watch when you were doing the Cristiano interview; he was convinced you were making him late for training.”

Fergie couldn’t actually apologise but was trying his best to make up for his mistake.

And even on his last day at United, in 2013, Fergie had to have the final word.

I joined the lap of honour, grabbing a word with the players.

Suddenly, I’m catapulted forward and almost knocked off my feet.

I regain my composure and my balance, look round and there’s Sir Alex, cackling away, having stuck a shoulder in my back, trying to knock me over, still just a 70-year-old schoolkid in love with football.