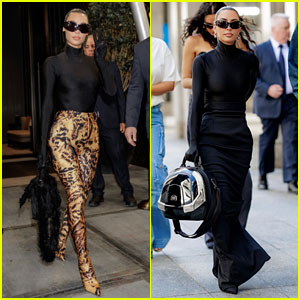 The 41-year-old The Kardashians mogul wore a daring pair of animal-print pants on her way to an appearance on Good Morning America. She paired the wild bottoms with a fitted, long-sleeved black turtleneck and dark glasses.

Later, she stepped out in a tight black skirt with a futuristic bag in hand.

Kim headed to Good Morning America to promote the new season of her family’s Hulu reality show, and she spilled some tea about the first episode!

She explained why she described the new season of The Kardashians as her “season of independence.”

“I just think you see me making decisions for myself,” she said. “Obviously always thinking about my kids but generally just doing things for myself.”

The reality star also had a tease about the first episode of the new season.

“The one thing I’m really excited about for the premiere episode is we haven’t done any promos on it,” Kim explained. “We’re not going to. It’s like a really seriously deep, vulnerable episode that we really haven’t talked about so I think people will be really just surprised and hopefully they will enjoy getting to see the first episode.”

In case you missed it, Kim just recently bought a $70 million home in Malibu! Check out the pics here.