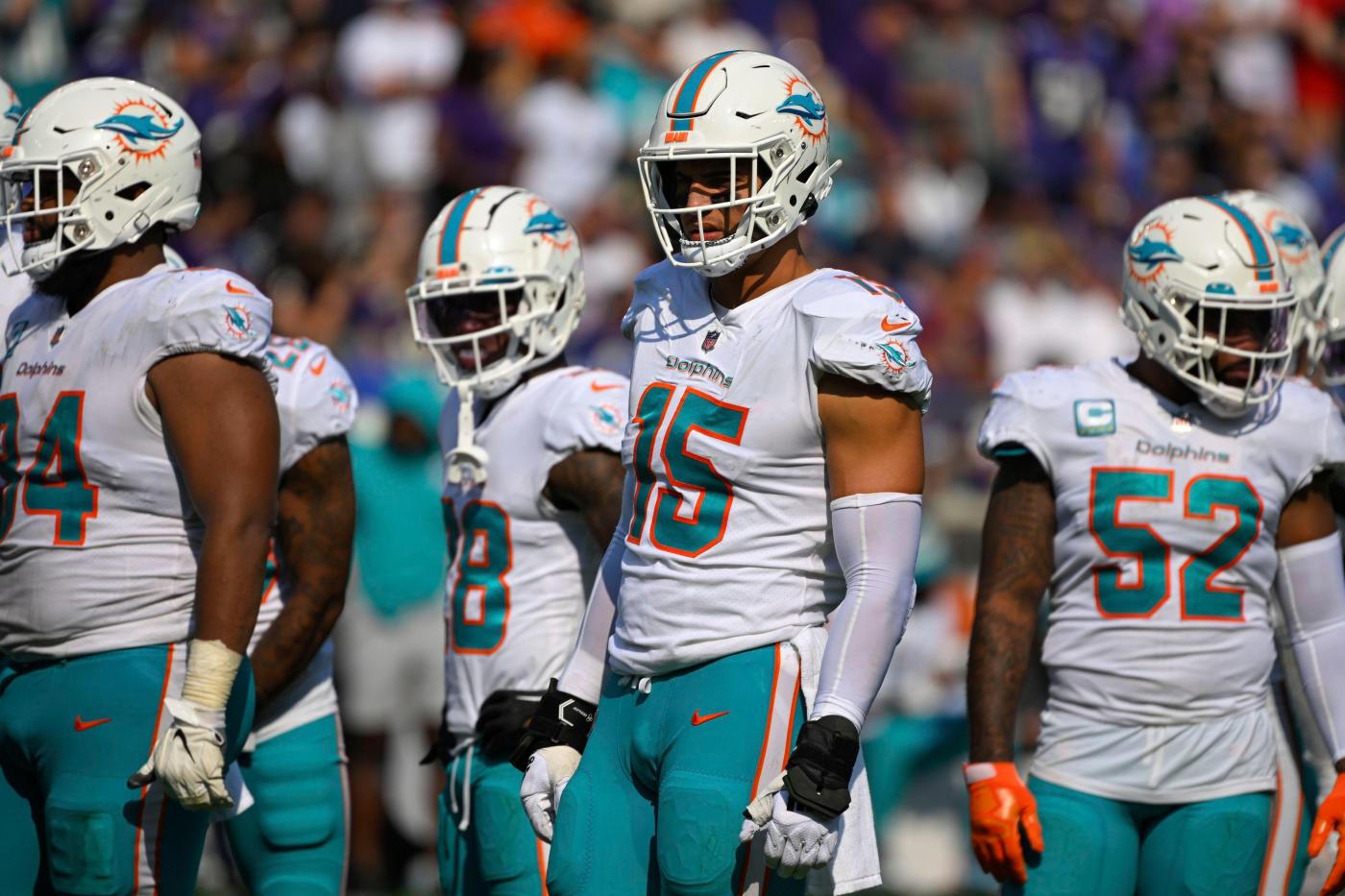 Q: Where’s the pass rush been? Particularly Jaelan Phillips, any insight on this? — Dawson Hall on Twitter

A: Here are the Dolphins’ pass-rushing stats through two games: Two sacks, three quarterback hits (one aside from the sacks), seven pressures.

Those are putrid numbers. It’s far from what we’ve been used to seeing from Miami’s defense. In 2021, the Dolphins had 48 sacks, were tied for the NFL lead with 107 quarterback knockdowns and were second with 193 pressures.

The seven pressures, according to Pro Football Reference, are second-fewest in the NFL through two games. They account for a pressure on 10.9 percent of opposing quarterback dropbacks, the third-lowest rate in the league.

Miami is coming off a game where it did not sack or hit Ravens quarterback Lamar Jackson on a pass attempt. This occurred despite blitzing Jackson heavily, doubling down on last year’s effective strategy that flustered Jackson. The Dolphins were actually more successful getting to the quarterback in the opener against the Patriots when they blitzed much less than coordinator Josh Boyer is known to do.

I’m not too concerned at this point because the numbers seem to be more of a reflection of Baltimore winning the chess match through three quarters on Sunday before Miami’s comeback. The Ravens had an answer for every Miami blitz. Jackson was either reading what spot was vacated by a blitz with a quick pass or Baltimore picked up the extra rusher.

With Jaelan Phillips, specifically, it may not be showing to the naked eye — or statistically (two tackles, a fumble recovery, no sacks or pressures in two games) — but advanced metrics indicate he’s rushing the passer well. He has a pass-rush win rate of a whopping 31 percent, according to ESPN.

To put that figure in perspective, last year’s league leader among edge defenders, Myles Garrett of the Cleveland Browns, registered 28 percent in 2021. If Phillips just keeps at it, the pressures and sacks will eventually come.

Miami has greater depth on the edge than it did last year. Veterans Melvin Ingram and Trey Flowers can contribute to a rotation at outside linebacker Phillips and Andrew Van Ginkel. Jerome Baker can still shift outside with Duke Riley entering at inside linebacker, or even Sam Eguavoen, as was seen Sunday. Defensive end Emmanuel Ogbah, who has one of the team’s sacks, will still be a menace with his hand in the ground, along with defensive tackles Christian Wilkins and Zach Sieler. The safety blitz of Brandon Jones, who had the strip-sack that led to the Ingram touchdown in Week 1, and/or Jevon Holland will still have its moments.

Q: Do you think Greg Little won the job at RT yesterday?— @dapples78 on Twitter

A: Little has been solid in replacing Austin Jackson as he recovers from an ankle injury. He wasn’t particularly noticed as a hole in pass protection, which is always good for a backup tackle, especially one that protects a left-handed quarterback’s blind side.

He had other flashes, notably a key run block that sprung tailback Chase Edmonds for the critical 28-yard run to set the Dolphins up at the Baltimore 7-yard line ahead of the winning strike from Tua Tagovailoa to Jaylen Waddle.

While encouraging, let’s see if he does it consistently over the next few games before we crown him the new starting tackle without giving Jackson his opportunity to return. Jackson has at least three more weeks on injured reserve where Little will be counted on to fill in. There will be a considerable sample size to gage by then.

Email David Furones, or tag @ChrisPerk or @DavidFurones_ on Twitter.

Should we be sold on this O-line; what’s up with Mike Gesicki?

Is Mike McDaniel ready for the moment?

Which rookie could make biggest impact?

What should be expected of DC Josh Boyer?

Where will Dolphins add another veteran free agent?

Is Christian Wilkins next for multi-year extension?

Can Tua still be a top-10 quarterback?

Another UN appeal to seek $600m more for flood aid