MARCO MATERAZZI looked very trendy as he donned a cool Burberry top during the tour of the World Cup trophy.

Materazzi is touring alongside the trophy as an ambassador for soft drinks company Coca-Cola.

The 49-year-old was the unfortunate recipient of Zinedine Zidane’s infamous headbutt in the 2006 World Cup final, which Italy went on to win.

But now 16 years on Materazzi has resumed his World Cup romance as he tours around with the trophy.

Materazzi’s most recent trip saw him visiting Belgrade in Serbia, where he was seen in a £450 Burberry wool top.

He enjoyed a trophy-laden career as he starred for both the Italian national team and Inter Milan. 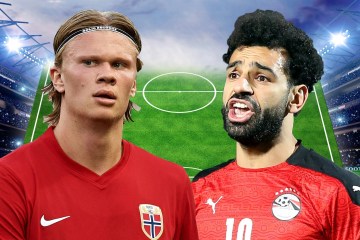 He won an unprecedented treble under Jose Mourinho at Inter, while in total he won 15 club trophies, including five Scudetto’s, the Champions League and the Club World Cup.

He is also credited as one of the few to score a goal in a World Cup final after he headed in Italy’s equaliser minutes after Zidane opened the scoring.

The World Cup trophy is journeying to each of the 32 qualifying nations ahead of the beginning of the games in November.

The hot environment in host nation Qatar means the tournament needed to be held at a cooler time of year, leading to the November start date.

HOW TO GET FREE BETS ON HORSE RACING

Last weekend the trophy was in Split, Croatia, while the tour itself will end in Doha, Qatar just a few days prior to the games.

While the World Cup is entering the final stretch prior to the tournament starting, there has been massive revelations for Euro 2024.

Russia was booted out of qualifying for the tournament following a Uefa announcement earlier today and England must pull off Nation League wins against Italy and Germany or face a far tougher group in their qualifying campaign.

Government to waive tax on sale of certain rented properties

High school football: All of the scores from Thursday’s Week 6 games