Over the last year or so, books were banned at least 2,500 times by more than 130 school districts across 30-plus states, according to an analysis published Monday by PEN America, a free speech and literary organization.

The unprecedented trend escalated throughout the spring and into the summer, according to PEN, which in the spring published a preliminary report documenting 1,586 book bans over the nine months starting in July 2021. “‘More’ is the operative word for this report,” PEN writes, comparing the latest analysis to the preliminary one. “More books banned. More districts. More states. More students losing access to literature.” The trend’s proponents have also gotten more savvy – and more creative – in their book challenging strategies.

“Over the 2021-22 school year, what started as modest school-level activity to challenge and remove books in schools grew into a full-fledged social and political movement.” PEN writes. That movement, according to PEN, has been powered by at least 50 activist groups, as well as politicians who have pressured or chilled schools into restricting children’s access to certain books.

Large majorities of Americans oppose book bans – at least 70% of both Democrats and Republicans, according to one poll. So why have so many books been removed from schools and libraries?

PEN attributes the movement largely to the dozens of groups – many self-described as “parents’ rights” organizations – that have often disseminated lists of books that they argue aren’t appropriate for schoolchildren and mobilized members to testify at school board meetings. At the forefront of these efforts are eight organizations that altogether comprise 300 or more local or regional chapters, according to the PEN analysis. These national groups include Moms for Liberty, US Parents Involved in Education, No Left Turn in Education and Parents’ Rights in Education.

All in all, the "parents' rights" groups, most of which have formed since 2021, played a role in at least half of the book bans last school year. (PEN defines a book ban as any action taken against a book that – resulting from community requests, administrative decisions or legislation targeting its content – leads to it being removed or otherwise restricted.)

And, according to PEN, they’ve developed new tactics for restricting book access. For example, some have taken to scrutinizing and interfering in district book purchases or digital library apps.

Lawmakers and other politicians are also helping to drive the challenges through legislation or policy changes that somehow implicates books. According to PEN, roughly 40 percent of the bans documented during the 2021-22 school year “are connected to political pressure exerted by state officials or elected lawmakers.”

Perhaps the most prominent example: Texas state Rep. Matt Krause, a Republican, who last fall distributed a list of roughly 850 books he wanted schools to review for potential removal from shelves.

“The unprecedented number of challenges we’re seeing already this year reflects coordinated, national efforts to silence marginalized or historically underrepresented voices and deprive all of us – young people, in particular – of the chance to explore a world beyond the confines of personal experience,” said Lessa Kananiʻopua Pelayo-Lozada, president of the American Library Association.

'We are war moms': Moms for Liberty dominates school board politics across US

Which books are being banned?

Between July 1, 2021 and June 30, 2022, according to PEN, 2,532 book bans were enacted, affecting 1,648 unique titles. (Many titles were banned by more than one district.) Most of the bans involved books that were indefinitely or temporarily removed from shelves pending investigations or reviews.

The ALA on Friday published a separate preliminary analysis documenting attempts to ban or restrict library resources between January 1 and August 31, 2022. Seventy percent of the 681 attempts documented during that period targeted multiple titles, the analysis found.

Books that are by authors of color, deal with racism and/or feature LGBTQ+ relationships are overrepresented on the lists. Many are graphic novels.

Banned book authors speak up: 'We can’t take these freedoms for granted'

What is 'obscenity'?: Conservatives are removing 'pornographic' books from schools

Supporters of book bans often argue the titles they are challenging are too obscene or mature for young readers. The most targeted title, by far, is Maia Kobabe’s graphic novel Gender Queer: A Memoir, which was banned in 41 school districts this past year. George M. Johnson’s All Boys Aren’t Blue comes in second place, banned in 29 districts. Also on the list: Out of Darkness by Ashley Hope Pérez (24), The Bluest Eye by Toni Morrison (22), The Hate U Give by Angie Thomas (17), Lawn Boy by Jonathan Evison (17) and The Absolutely True Diary of a Part-Time Indian by Sherman Alexie (16). 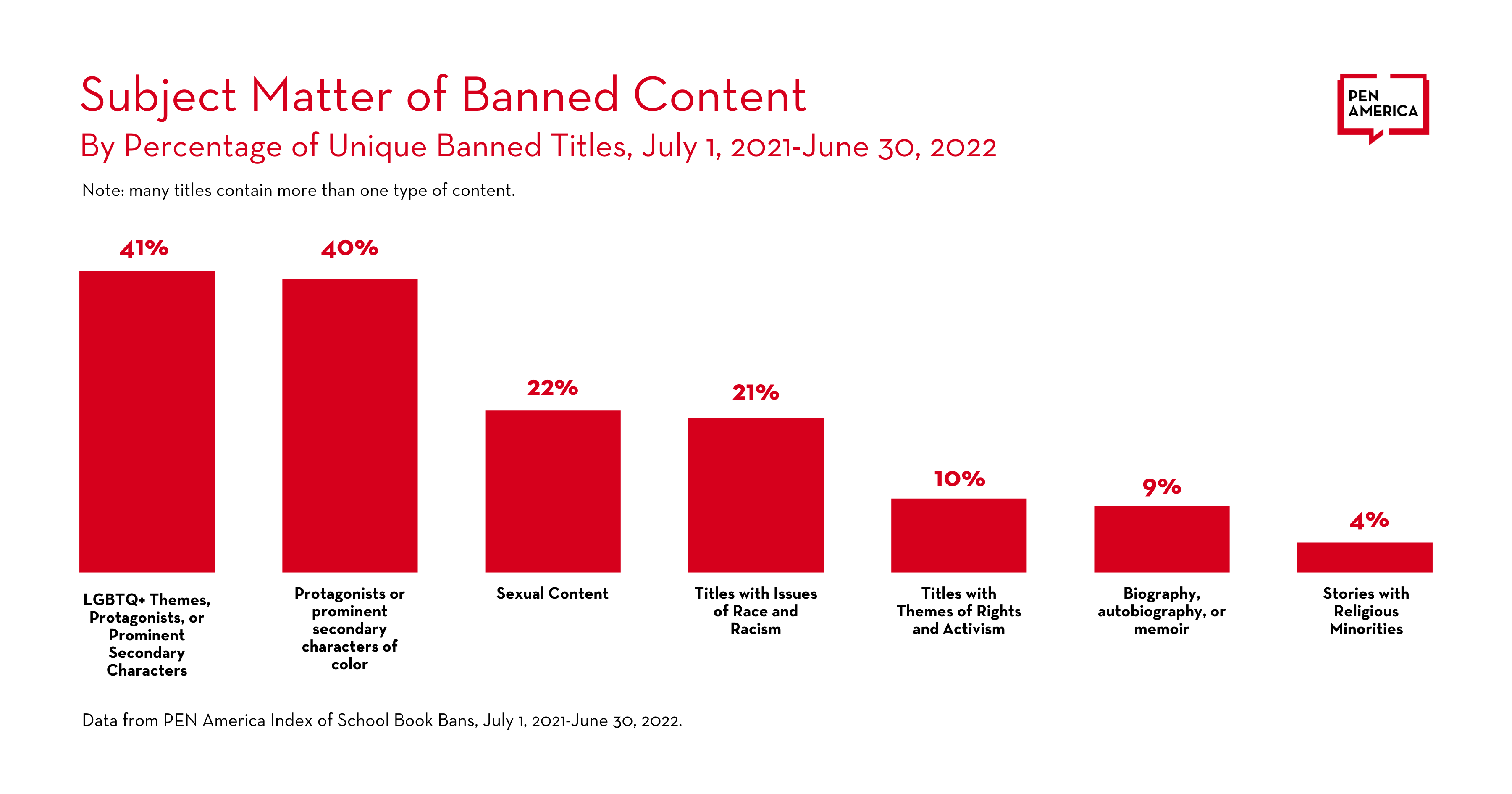 When did the current wave of book challenges start?

PEN describes the recent spate of efforts to restrict books as an “evolving censorship movement.” While the tensions leading up to it had been percolating for a while, the current trend can be traced back in part to last year.

More than two dozen states already had begun considering – and, in some cases, passing – legislation to restrict discussions about race, sexual orientation and gender identity in classrooms. The legislative efforts were fueled by Republican resistance to so-called “critical race theory,” a graduate-level legal concept that examines how racism continues to permeate policy and society. The critical race theory backlash morphed into a broader push to eschew conversations about LGBTQ+ issues from classrooms.

The wave picked up momentum last fall, when activists and conservative policymakers intent on reforming curricula began focusing much of their energy on books. The campaign by Krause, the Texas state representative, embodies this shift in strategy.

Books are being banned from schools: Here's what that does to students.

Opinion: As schools target 'inappropriate' books, I say keep going: My list of what to ban next

Where are book bans taking place?

The book bans documented by PEN between July 2021 and July 2022 took place in 138 school districts across 32 states. That marks a significant increase from PEN’s last tally, published in April, which found bans in just 26 states and fewer than 90 school districts. 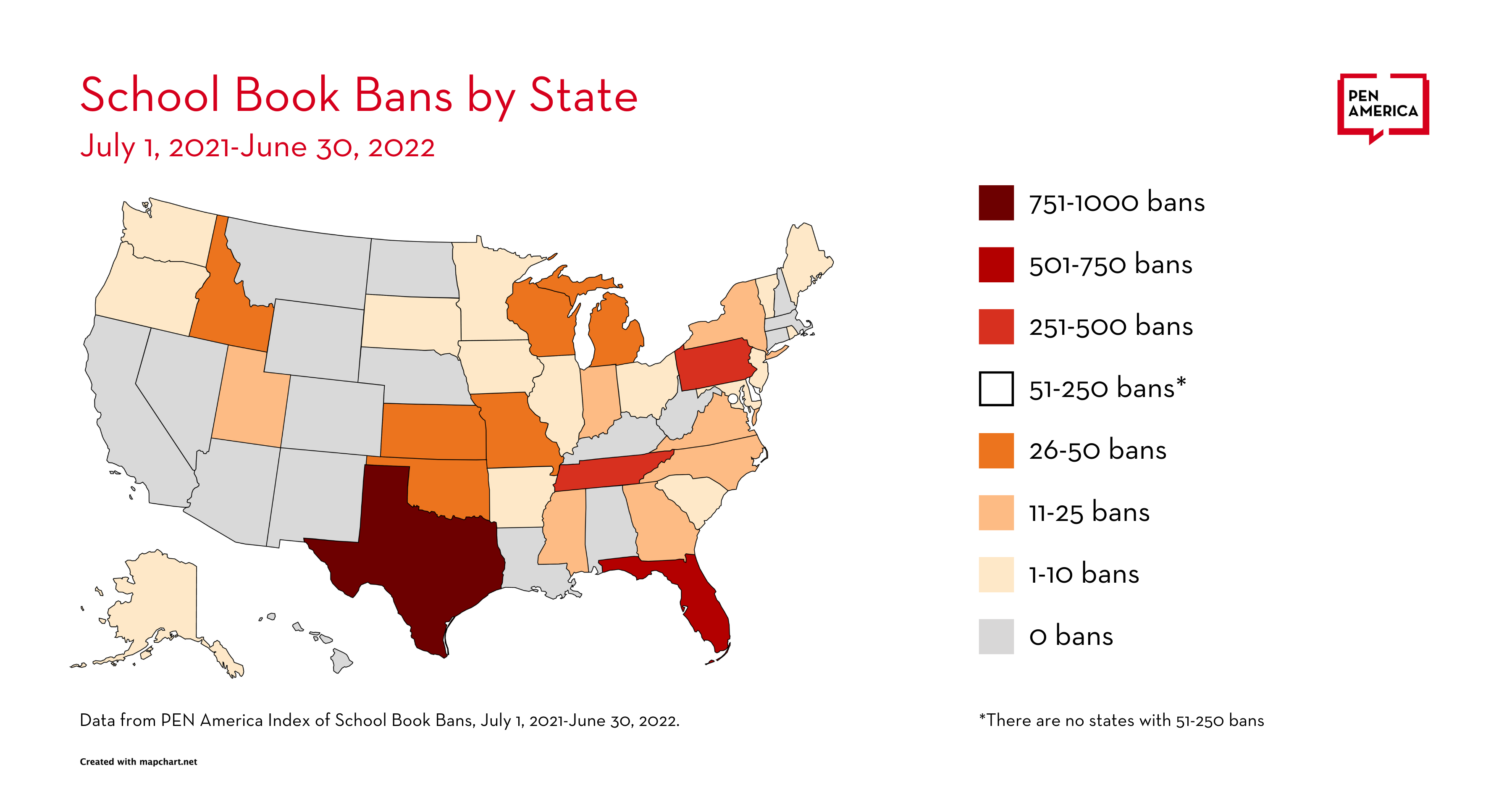