SPORTY Kate is to take on tennis legend Roger Federer — to raise money for disadvantaged children.

The Duchess of Cambridge, 40, and former world No1 Federer, 41, will play a friendly match at a secret location.

Her family are friendly with Federer, a tennis teacher to Prince George, nine, and a guest at the wedding of Kate’s sister, Pippa Matthews, 38.

Kate, patron of Wimbledon All England Tennis Club, and Federer have joined up to help Action for Children and the LTA Tennis Foundation.

The royal, who trained with the England team at Twickenham when made RFU patron in February and last month went sailing with Olympic hero Sir Ben Ainslie, suggested the collaboration. 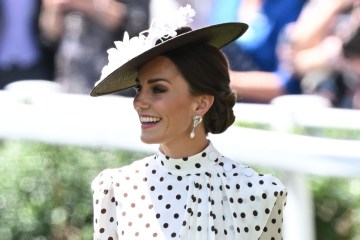 FIT FOR A quEEN

Kate sends heartfelt note to girl, 6, who asked George to go to her party

She and Swiss Federer — her mum Carole’s “heart-throb”, Kate once disclosed — will play a knockabout in East London watched by kids.

Proceeds from an open practice session of The Laver Cup — a tennis contest co-founded by Federer — taking place next month will boost Kate’s charities.

I'm a catfish, men say I’m ugly without makeup but are amazed when I'm dolled up

Some of the cash will fund 50 Lawn Tennis Association training programmes.

Kensington Palace said: “Her Royal Highness is passionate about supporting grassroots tennis and encouraging young people from all backgrounds to become involved in the sport.”

Wimbledon patron Kate and Federer have joined up to help Action for Children and the LTA Tennis Foundation[/caption] Kensington Palace said: ‘Her Royal Highness is passionate about supporting grassroots tennis’[/caption]