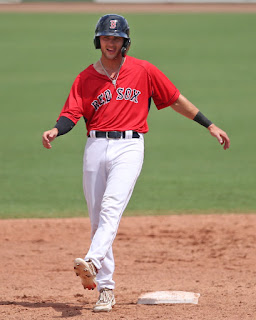 7/24 Cup of Coffee: Greenville out-slugged Aberdeen, as they were led by Phillip Sikes (pictured) and Joe Davis, who each hit home runs and combined to drive in five. Alex Binelas also went deep for Portland, while Juan Daniel Encarnacion pitched very well in Salem's win.
-----
Syracuse Mets (NYM) 7, Worcester Red Sox 3
Brian Keller and James Norwood opened up this one well for the Sox, each tossing two scoreless frames. Keller struck out four and did not allow a hit, while Norwood struck out two. Durbin Feltman struggled, allowing four earned runs with three walks and got just two outs. Eduard Bazardo struck out four in 2 1/3, and Phillips Valdez threw a clean ninth with a pair of strikeouts. At the plate, Pedro Castellanos went 2 for 4 with a double and a run scored. He's hitting .320 in 20 games with Worcester. Devlin Granberg also had two hits, including a double.
-----

New Hampshire Fisher Cats (TOR) 5, Portland Sea Dogs 3
Alex Binelas supplied the offense for Portland, belting a three-run home run in the second inning. It was his sixth of the season. Hudson Potts also went 2 for 4 with a double. Tyler Dearden and Ceddanne Rafaela each roped doubles as well. Yusniel Padron-Artiles started for Portland and lasted four innings, surrendering two runs on four hits. Dylan Spacke followed him with 3 1/3 innings of one-run ball, striking out five.
-----

Greenville Drive 8, Aberdeen IronBirds (BAL) 6
Phillip Sikes led the charge on offense, going 2 for 4 with his third home run of the year, as well as a single and a walk. Joe Davis blasted a three-run shot as well, his 16th long ball of the year. Matthew Lugo had a big day as well with three hits and a walk. Nick Decker also doubled, walked, and scored a pair of runs. Wyatt Olds labored through 3 2/3 innings, allowing four runs (three earned) on five hits with four strikeouts and two walks. The bullpen was great, as Jordan DiValerio allowed two unearned runs over 2 1/3 with four strikeouts and no walks, and Joey Stock tossed a pair of scoreless innings to earn the win. Jacob Webb picked up the save with a prefect ninth, ending it on back-to-back strikeouts.
-----

Salem Red Sox 3, Lynchburg Hillcats (CLE) 2
Salem did their scoring early, as Blaze Jordan got things going with an RBI single to score Marcelo Mayer in the first inning. Each of them went 1 for 4, with Mayer roping his 23rd two-bagger of the season. In the second, Bryan Gonzalez hit an RBI double before Brainer Bonaci's RBI single. Gonzalez would add a single as well, and Jose Garcia went 1 for 2 with a double and a run scored. Juan Daniel Encarnacion started and was very good, allowing one run over five innings. He struck out five and walked two. Graham Hoffman struck out three in two innings of work, while Luis Guerrero nabbed a two-inning save, striking out a pair.
-----

FCL Red Sox 3, FCL Twins 0
Sox pitching struck out 13 hitters in the shutout, started by Luis Perales, who tossed three innings with four strikeouts. Perales was bumped into the SoxProspects.com top 60 this month and has a 1.13 ERA in 16 innings this year. Francis Hernandez followed him with three innings of his own, striking out three without a walk. Jhonny Felix, Henry Nunez, and Railin Perez all threw a hitless frame, with Felix striking out three. Allan Castro had a big day, going 2 for 5 with a triple and an RBI single. Juan Chacon also drove in a run with a single, and Ronald Rosario roped a double.
-----

DSL Astros Orange 2, DSL Red Sox Blue 1
It was a rare loss for the Blue squad, as they were held to just six singles on the day. Fraymi De Leon, ranked 45th at SoxProspects.com, went 2 for 4 with his ninth stolen base of the year. Miguel Rojas also picked up a couple hits. Andy Lugo went 1 for 3 with a walk and scored the only run, while Helison Mota reached three times, all via the walk. Luis Cohen started and the first four, allowing one run on four hits with three strikeouts and no walks. Ali Ascanio struck out a pair in 1 1/3 scoreless innings, while Daniel Nunez, Wandy Abreu, and Elvis Soto each tossed an inning with one strikeout and no earned runs allowed.
-----

DSL Royals Glass 6, DSL Red Sox Red 0
The Sox were no-hit by the Royals and only had two base runners. Yosander Asencio and Yohander Linarez each drew a walk. Starlin Santos had a nice outing out of the bullpen, going 2 1/3 innings without allowing a run with two strikeouts. Irving Medina, Ovis Portes, and Royman Blanco each tossed a scoreless frame, with Portes punching out a pair.
-----
Player of the Day: Phillip Sikes continues to be dialed in for Greenville, as the 2021 draft pick is now hitting .302/.354/.581 with five extra-base hits over 11 games for the Drive. This comes after posting a .906 OPS in 50 games for Salem. The 23-year old outfielder has added 14 stolen bases between the two levels as well.

Today24.pro
2023 Audi S3 & RS3 Buyers Guide Is it worth it? How does it compare? The Shins Off-Air Performances College students are quietly one of Chipotle's most important customers Chinese Tourist Hot Spot Sanya Imposes COVID-19 Lockdown