A MUM has revealed how she’s trolled for “not dressing her age” at 40 – but won’t ditch wearing crop tops.

Brandi, a mum-of-three, 40, from Virginia, USA, has 58,700 followers on TikTok – where she shows off her make-up regime, how she treats her curls and love of fashion – but not everyone’s a fan.

Mum-of-three Brandi, 40, gets trolled on TikTok for wearing crop tops & too much make-up[/caption] The defiant mum says ‘I like being ME’[/caption]

In one clip, where she’s dressed like a librarian with her hair slicked back, Brandi reveals some of the rude comments she’s received.

She shames the trolls, writing: “You’re 40, so dress like it”, “Stop wearing so much make-up” and “Just let your hair go grey”.

But she responds: “No thanks, I like being ME” and then transforms into her usual glam self, with her curls perfectly styled, hoop earrings, a pink crop top, trackies, trainers and a full face of make-up. 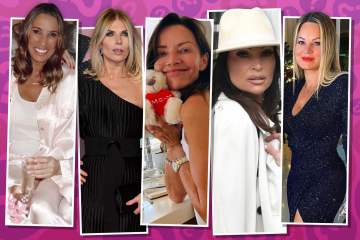 Can you match these glam mums to their celeb daughters? 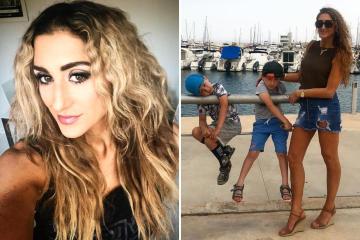 In another clip, Brandi hits back at “just one of the MANY not so nice comments” – where she’s shamed for having Botox, but insists she has nothing to hide.

It reads: “I’m so sorry, if you guys think her face looks like this due to make-up and not Botox!?!! She looks like she’s unable to blink! No doubt, I’d do it too”.

Hitting back at the treatment-shaming, Brandi says: “Once again, the internet has proven it is one of the most judgemental places that you can come.

“But I want to go ahead and address this, even though I really shouldn’t have to.

“Like I previously mentioned in my last video, I have gotten a lot of skincare questions which is why I wanted to start sharing more about my skincare (and look at me blinking… it’s a miracle).

“The last video was about a make-up item that I felt makes my skin glowy. It had nothing to do with what I actually do for my skin.

“But I also know that Botox is not the end all, be all – so if you want to have great skin then you have to take care of your skin.

“I am a skincare fanatic, I take extremely good care of my skin, I do lots of facial treatments and that is what I wanted to share on here.

“So if you’re someone that came to my page just to judge and make nasty comments, then I am praying for you. But if you came to learn, then I’m here to share my secrets. And yes, at 40 years old that does include Botox.”

Brandi’s fans were quick to defend her in the comments, writing: “you look better than most 20yr olds”, “when these young kids think 40 is old (eye roll)” and “omg you’re so pretty”.

Another mum commented: “guuuurl you’re on fire – and someone please tell me how we’re supposed to be acting at 40… I’m confused”.

While one supporter said: “Ignore the haters honey. I follow you on utube and IG you’ve never tried to hide anything. Your a beautiful person – thanks for sharing tips !”

We previously spoke to a mum-of-six, 41, who said: “trolls say I look haggard & they feel sorry for my kids – but I won’t stop glamming up for TikTok”.

In one video, she dresses up as a librarian to show her epic transformation[/caption] Back in her glam crop top, Brandi’s fans have praised her for standing up to the trolls[/caption] Brandi has also been shamed for having Botox – but insists she has nothing to hide[/caption]

You can tell how good a man is in bed by his personality type, scientists reveal

Today24.pro
The Shins Off-Air Performances Athletics give up three more homers, are swept by Giants in Bay Bridge Series Why didn't Jamaica join Canada? (Short Animated Documentary) How To Get Rid Herpes Virus with Autophagy Fasting? - Natural Treatment For Herpes by Dr. Berg