EASTENDERS’ Ian Beale never looked this happy when he was slinging fish and chips back in Albert Square.

But Adam Woodyatt, the actor who played him, looked like he was having the time of his life behind a counter.

The star – who stood down from the role not far off two years ago now – was in his element in Cheshire.

He was in charge of the garnish out front at the The Kilt & Mitt at Carfest North, while chef Eddie Kilty ran the kitchen.

Pictures showed cheerful Adam looking worlds away from EastEnders‘ dour Beale as he waved, pointed and sampled the produce. 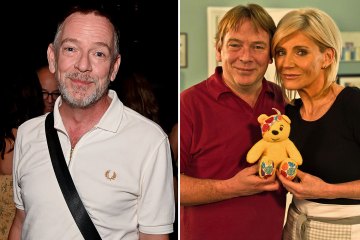 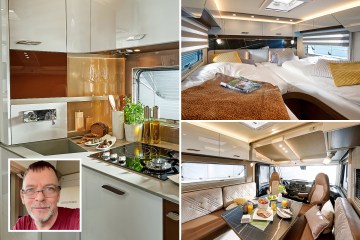 In what looked like a nod to his time in the I’m A Celeb castle, the star wore a wide-brimmed hat with his branded T-shirt.

Wearing a microphone, he spoke to the crowd and showed off some of the company’s amazing-looking dishes.

It’s far from the first time Adam has been seen working a food counter since stepping down from EastEnders.

He was spotted serving Cajun wedges and kedgeree at Pub In The Park in Wimbledon earlier this year.

The star was also seen working a food stall in Marlow, Bucks, in 2021, telling customers he was “getting paid in burgers”.

Adam had been playing EastEnders penny-pinching Ian since 1985, and was the longest-serving members of the cast.

He stood down from the show in November 2020 with his final scenes airing in January the following year.

The star has long insisted he has no plans to return to Albert Square, enjoying other work enjoying a theatre run.

He told Steph McGovern: “I’ve kind of left, but not left. It’s kind of the way the storyline has gone, I’m not there.

“I could go back and I could not go back! I don’t know. The speculation has been hysterical.

“I think everyone is always going to speculate. But there are no plans at the moment.”

Adam showed off some of the dishes in Tattenhall, Cheshire[/caption]

Today24.pro
10 Over The Top Boss Moves We DID NOT SEE COMING Kate Middleton will take on tennis legend Roger Federer at secret location to raise money for charity How Charlize Theron and KiKi Layne Spar in The Old Guard Anatomy of a Scene Matthew Judon Fed Up With Joint Practices? Twitter ‘Like’ Hints Feelings