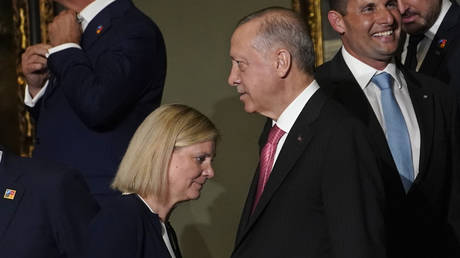 Turkey's Foreign Ministry has reportedly summoned Sweden's top diplomat in the country, to express the government's “strong reaction” to a Kurdish group’s protest this week in Gothenburg.

Officials told Sweden’s interim chief of mission in Ankara that they view the gathering as “terrorist propaganda,” according to reports by Reuters and multiple Turkish media outlets, citing unidentified diplomatic sources.

The latest flareup in Stockholm’s relationship with Turkey comes soon after Erdogan threatened to block approval for Sweden and Finland to join NATO, over concerns that the Nordic countries are hosting Kurdish militants. Last month in Madrid, the countries signed a tripartite memorandum under which Sweden and Finland pledged to end their embargo on arms sales to Turkey and crack down on individuals and groups that Ankara has branded terrorists.

“In this context, our expectations for identifying the perpetrators of the action, taking the necessary legal and judicial measures and taking concrete steps in light of the commitments recorded in the tripartite memorandum were emphasized,” Turkish diplomatic officials said of the Gothenburg protest.

Wednesday's rally involved supporters of the PKK and other Kurdish groups that Turkey has designated as terrorist organizations. Pictures and videos posted on social media show demonstrators carrying pro-Kurdish banners, including PKK flags. The group’s flags were also reportedly hoisted on several poles in the center of the city, according to Turkish media reports, while some of the marchers carried a banner saying, “We are all PKK.”

Erdogan warned this week that Turkey may still “freeze” the NATO applications of Sweden and Finland if they don’t fulfill the conditions of the Madrid agreement. “Sweden, in particular, does not have a good image on this issue,” he said.

Bundesliga striker linked with a move to Manchester United

DOJ officials were alarmed by surveillance footage of the Mar-a-Lago room where classified info was being stored, report says