They spotted a “clue” in a new TikTok video where Kylie was on a walk with her youngest child in a garden.

Kardashian fans think they know what Kylie Jenner has re-named her son[/caption] Formerly ‘Wolf,’ she changed it to something still unknown – but planted the ‘clue,’ they claimed, in her video[/caption]

They publicly retracted their original name for their baby boy because it “didn’t feel like him,” as she wrote on Instagram in March.

Since then, the couple has remained hush on the baby’s new name.

But The Kardashians star posted a new TikTok on Saturday, July 23rd that had fans strongly felt wasn’t just a garden variety update.

Read more on the Kardashians 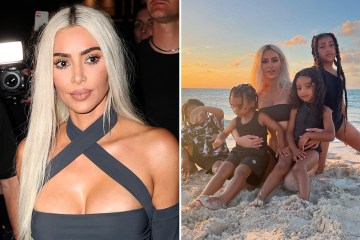 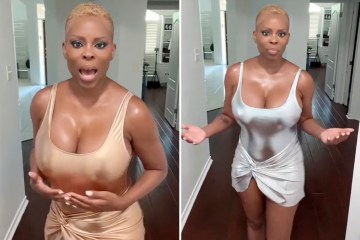 She adorably walked her five-month-old through a field of veggies, and set the tranquil TikTok to ambient music.

Fans haven’t seen the infant’s face yet, so any footage of him excites.

Her boy was strapped into a front-facing carrier as Kylie strolled.

She displayed different veggies being grown, including some tomatoes and eggs, but only showed one label for any item.

In the comments, feverish fans thought she was soft-launching the phonetically similar new name for the younger brother of Stormi, four.

“Sage is pretty usual as a boy’s name” commented another.

A third chimed in: “I wonder if his name is Sage since that was the only tag we saw.”

“I’m just waiting for all the comments saying his name is Sage” ripped a fourth.

Indeed, fans have been fiendishly finding clues as to what Kylie’s new name for her boy is wherever they can.

Back in June, Kylie posted a video and in the background, and some easels were set up for crafts and cards alongside a table of glasses.

On the easel, there was a drawing that some fans think was made by Kylie and Travis’ daughter Stormi.

Even earlier, fans thought Kylie revealed the name in an Instagram post in Portofino, Italy, at her sister Kourtney Kardashian’s wedding.

The post included Kylie and Stormi holding a doll as they were both dressed up for the day’s celebrations.

The caption read: “Just me, storm, and coconut traveling the world together.”

Kylie’s half-sister, Khloe Kardashian, replied to the post, pointing out the telling detail.

“I love you three,” she wrote, adding a separate comment: “Coconut is too cute.”

Fans were more than willing to conclude that “Coconut” is the newborn’s name.

Meanwhile, an Instagram account that was rumored – though completely unproven – to be run by Kourtney’s son Mason Disick has a theory.

That page has persisted that his name is Knight Jacques Webster.

Kylie’s newborn took his middle name from his dad and it is Jacques – that part of his name has not been retracted.

Kylie has proudly shown off her stretch marks and spoken on her postpartum life even if she hasn’t shared the new name.

The Hulu star recently posted a video recently that had her rubbing baby lotion on her baby’s legs and feet.

It was a clip that some fans weren’t happy with due to Kylie’s long nails, but she has been largely praised for showing off her “stretch marks and extra weight.”

The Keeping Up with the Kardashians alum was lauded for “normalizing normal bodies” when she shared a photo of her stomach with her baby son’s feet resting on it in March.

Kylie posted the snap of just the bottom of her baby’s feet on her tummy, taking the photo from above.

Her fans flocked to a Kardashian online thread to praise her for sharing the reality of being a mom – though since many have clearly wanted more content and conclusions.

One wrote: “As a mommy, I love the rawness of this picture. The stretched skin, the postpartum tummy, the little extra weight. I just love it.”

Another added: “I love that she posted this. Normalizing normal bodies.”

“For women who have such big platforms, this is the type of content we need from them! I love this so much!” a third posted.

Recently, the mom-of-two also also showed off her curves in tight dress for a rare unedited video.

In the TikTok clips, Kylie put her incredible body on display in a white dress with a cone bra-style neckline.

She set the video to a voiceover of a man asking, “What separates you from the competition? What makes you special?”

Kylie then lip-synced: “What competition?”

Fans are convinced Kylie has hinted Stormi’s brother is named ‘Sage’[/caption] The 24-year-old has not shared his new name after changing it from Wolf, nor his face[/caption] The Hulu star and Travis Scott share Stormi and their five-month-old[/caption]

Patriots Training Camp Observations: Everything We Saw In 11th Practice