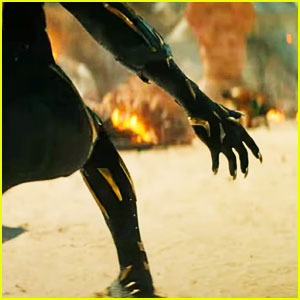 Marvel is bringing fans back to Wakanda!

On Saturday (July 23), the trailer for the highly-anticipated Black Panther: Wakanda Forever was released during the 2022 San Diego Comic-Con.

The trailer for the new movie, which was directed by Ryan Coogler, shows the return of Letitia Wright, Lupita Nyong’o, Danai Gurira, Winston Duke, Martin Freeman, and the Queen Mother of Wakanda, Angela Bassett.

“I am Queen of the most powerful nation in the world, and my entire family is gone!” Angela‘s Ramonda declares in the trailer.

A mural of Chadwick Boseman‘s T’Challa is also shown in the trailer.

The trailer also teases who will become the next Black Panther. A figure is seen wearing the hero’s suit at the end of the trailer, but their identity is not revealed.

Black Panther: Wakanda Forever, will be out in theaters on November 11, 2022, marking the end of Marvel’s Phase Four.

You can check out the complete lineup for Phase Five here!

Man found with over £60k of stolen Pokémon cards

I’m an interior designer, the worst home trends of all time – and it’s bad news if you’ve got lino floor