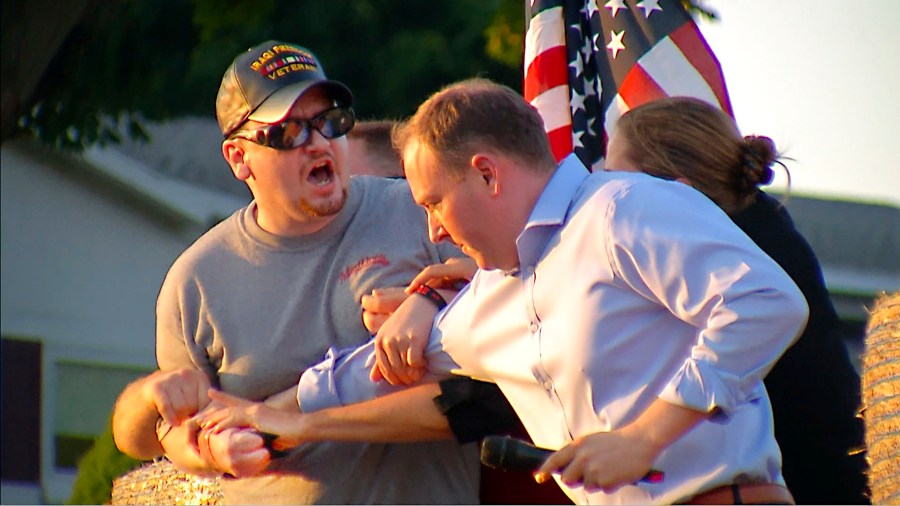 Prosecutors announced Saturday that they had charged a suspect for allegedly attacking Rep. Lee Zeldin (N.Y.), the Republican gubernatorial candidate in New York, during a campaign event earlier this week.

Fairport, N.Y., resident David Jakubonis, 43, has been charged with assaulting a member of Congress using a dangerous weapon while Zeldin held a campaign event in Perinton, N.Y. on Thursday, the U.S. Attorney’s Office for the Western District of New York announced.

He appeared before a magistrate judge on Saturday afternoon and a detention hearing has been scheduled for Wednesday morning.

It was not immediately clear if Jakubonis had an attorney representing him at the announcement of the charges.

Prosecutors allege that Jakubonis grabbed Zeldin’s arm while the Republican gubernatorial candidate was speaking and had a keychain with several sharp points extended in Zeldin’s direction.

Jakubonis was detained after he “pulled Congressman Zeldin down onto the bed of the trailer, stating several times during the assault, ‘you're done,’ ” according to the U.S. Attorney’s Office’s press release.

The Monroe County Sheriff’s Office said in a press release on Thursday that Jakubonis had been charged with attempted assault in the second degree but had been arraigned and later released on his own recognizance.

"I'm thankful that federal authorities came in to do what New York State’s broken pro-criminal justice system could not - uphold the rule of law," Zeldin's statement said. "The state must start prioritizing the safety of law-abiding New Yorkers over criminals. Cashless bail must be repealed and judges should have discretion to set cash bail on far more offenses."

Today24.pro
College students are quietly one of Chipotle's most important customers The Shins Off-Air Performances 2023 Audi S3 & RS3 Buyers Guide Is it worth it? How does it compare? Chinese Tourist Hot Spot Sanya Imposes COVID-19 Lockdown